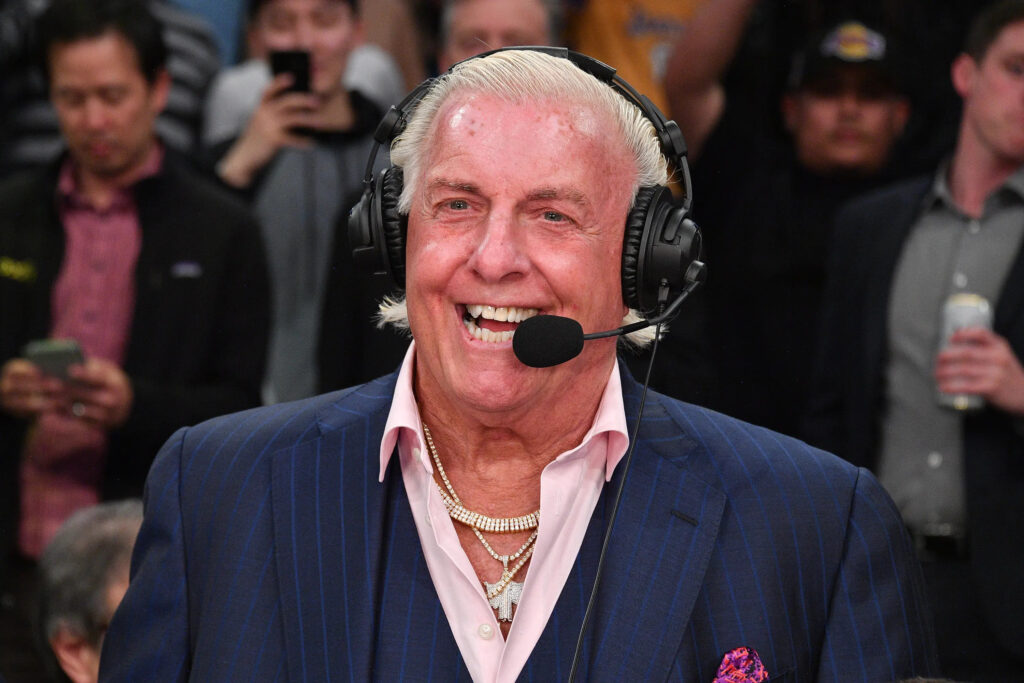 “The Nature Boy” Ric Flair (@ricflairnatureboy) is an iconic professional wrestler and 2-time WWE Hall of Famer. He joins Chris Van Vliet to talk about his last match that is taking place on Sunday, July 31 at the Nashville Municipal Auditorium, why he decided to wrestle again after his retirement match at WrestleMania 24 against Shawn Michaels, his thoughts on Vince McMahon’s recent retirement from WWE, who is on his pro wrestling Mount Rushmore, the catch phrase he is most proud of, his goals when he first entered the wrestling business in 1972, his thoughts on whether John Cena or Randy Orton will break record as the 16-time World Champion, the story behind his famous WOOOOO Off with Jay Lethal in TNA Wrestling and much more!

On Ric Flair’s goal when he first entered the business:

“Well I don’t know, because I didn’t know what to expect. From the day I started it was totally different to what I thought it would be. When I started it was very difficult to get into the business, extremely tough. It was gruelling and the old timers didn’t like the young guys coming up. It was just a whole different world, every step was about learning the respect, trying to get the respect from the guys that had been in it for a while. That was an every day challenge.”

On who is on Ric Flair’s Mount Rushmore:

“Austin, Hogan, Taker and Shawn Michaels. [Chris mentions that Ric Flair doesn’t put himself on there] I would, but I think those 4 guys had a huge [impact]. You could put The Rock on there too, it’s interchangeable. The best worker of all time is Shawn Michaels, the biggest personality of all time would be The Rock. The biggest draw of all time would be Steve [Austin], and you can’t leave Hulk off because he drew a ton of money. Different timeframe but it was sold out every night. Even though I was NWA World Champion and I think that my job was a lot harder than everybody else’s, because being the NWA Champion you are gone 6 months at a time, sometimes longer. And I was wrestling everyone all over the world, that’s the difference, you are not just wrestling the same guy, which I had done with Steamboat and Sting and Dusty. That was all while I was travelling around the world, especially with Dusty and Steamboat.”

On WrestleMania 24 being the perfect retirement for Ric Flair:

“It was but then I got divorced for the 3rd time. It was hard paying the attorneys and paying alimony, so you know, I probably didn’t need to, but I kind of missed it too. I sure could have worked around it, but I never considered bankruptcy as an option. Then when I got sick in 2017, I got behind with the IRS because the hospital bills were $1.3 [million] Medicare A, I didn’t have Medicare B at the time, I had to pay them $800,000. So not only did I have to go back in, I had to pay them back and then I had to pay the IRS another million dollars, just because I was late on what they call an offering compromise.”

On what the final match means to Ric Flair:

“Well it’s not about money at all, I’m great moneywise. When I saw Steve [Austin] and Vince at WrestleMania, people have been asking me to do it. Some people actually offered me $100,000 to do it and I’m just like nah, because I didn’t want to go into it half assed, I really had to get into shape. So I have taken 3 months to really get into shape and I feel great. I’ve had some ups and downs, I had plantar fasciitis, I still have it but it is 90% healed. But I have that under control and I feel great. I don’t hurt and I don’t ache so why not? And who doesn’t like the glory? If I pull it off, I’ll be bigger than ever.”

On the positive reaction to the training videos with Jay Lethal:

“I didn’t know whether I could take a slam or not with the pacemaker, but the doctor told me that, the one I like the best, that I have enough scar tissue around the pacemaker that it won’t budge, and it didn’t. Unless it moves on the day of the match I’ll be fine, even then just plug me back in. I don’t have a defibrillator, when you have a defibrillator it is really hard to take bumps. I had that blood clot issue a couple of times in the past 10 years, but I take half a blood thinner. I plan to entertain them man!”

On the family’s reaction to Ric Flair’s last match:

“They are saying this is awesome, they are very supportive. They know that I want to be a part of it and that I want to be rocking and rolling. I wouldn’t have it any other way. But one thing that I didn’t anticipate is that this has captured the hearts of America. Everywhere I go, I do a lot of travelling for a living with autograph signings and I made a commercial with Car Shield. No one is talking about SummerSlam or AEW, they all know about my last match, it has got a lot of national publicity.”

On possibly pushing the match back so it would be 50 years of Ric Flair wrestling:

“Conrad is a smart guy. We’ve got 70,000 people in town for the week of SummerSlam, and they are having it on a Saturday, which is unusual. But it worked out great, the roast is sold out and I think we have 200 tickets left for a 9,000 seat sell out in the auditorium. WCW never sold out the auditorium, WWE had a hard time doing it and AEW didn’t do it, so it is a big accomplishment.”

On if this really will be the final match for Ric Flair:

“It has to be. I get that question asked a lot, but it has to be. Even if I do well, I can’t go back on my word to the people that have given me all this respect, time and bought tickets. I have been offered 10 matches at 50 grand a piece, and I think in Europe someone offered me 100 grand. But this will be the last one. I can manage somebody and be in the ring, but it will be my last match.”

On being nervous for the last match:

“[I’m nervous about] pulling it off. It’s a lot of pressure, people don’t realize it, you lose your self confidence a couple of times. Two weeks ago I thought I had pneumonia, because I was training so hard and going back and forth. I was doing 50 mile round trips with the air conditioning and sweating, so that happened. Then there was what happened with my foot, but now it is all coming together, 5 more days.”

On deciding who the opponents would be for Ric Flair’s last match:

“Conrad and I put it together initially. We were going to go outside and use some people from AEW, but then it all became a little political with Tony [Khan]. I’m not sure why he changed things around but we worked around it and we are sold out. That’s all that matters.”

On possibly having a legendary opponent like Hulk Hogan or Ricky Steamboat as the last match:

“Well neither one of them are physically able to do it. I talked with Steamboat for a long time and he’s got issues with his back and his shoulder. I think that if Ricky wanted to go out, he had that great run with Jericho back in 2011 I think. I think Ricky wanted to go out with that memory, because he was as good back then as he was in his prime. He had some great matches and he liked the ‘You still got it.’ Why put that on the line again? And Hulk, he has had so many back surgeries, a double hip replacement, double knee replacement, why take a chance? For me, everything is still hooked up still, thank God!”

On the origin of the ‘Limousine riding…’ catchphrase:

“It just came out one day. That’s the way I roll.”

“I wasn’t happy about it at all, I love Vince McMahon. I don’t know what he is doing right now but I feel like he will have a hard time. He will adjust obviously, but he loved the business and he made us all who we are, from Hulk to everybody. I don’t care what everybody else thinks, he made us, and I have nothing but respect for him. He is a majority stockholder, I don’t know if he will [stay away] or not. He’s a genius.”

On the biggest thing that Vince McMahon has taught Ric Flair:

“For me personally, he said that I needed to get my sh*t straightened out, because I was pretty wild, as people are well aware of. I could be remembered for 2 things, either the greatest wrestler of all time, or the guy that p*ssed it away and got married too many times. He is such a hands on guy, nothing went around at the company that he didn’t know. To me, I guess he had a very difficult time delegating authority. He has to really trust somebody to put them in a position to make the big decisions. He hates lawyers, he likes to talk to you man to man. He would always tell me ‘Before you say a word, hear me out…’ Of course I can’t do that ‘Let me finish.’ He is not bullsh*tting you, he is the real deal.”

On how Ric Flair wants to be remembered:

“Well if I pull this off then I will have to be remembered as the greatest of all time. If it’s even remotely good. [I am] 73 and I got it down, I’m not kidding you. Unless something bad happens, and I don’t know what it will be. I am minding my p’s and my q’s, saying my prayers, taking my vitamins, I am ready, it will be fun. What else is really important to me is that my whole family will be there. My grandchildren, my kids, a couple of my ex-wives [laughs]. One of my ex-wives and my wife, all my kids, that will be spectacular to do it one more time.”

On if the match is planned out:

“No I’m one of these guys that [call it in the ring], but the guys in the ring know me, I got to hear the crowd, then I will know where to go. I’m not a plan a and plan b, but these guys are all excellent performers. I mean Andrade, who gets to wrestle with their son in law? How cool is that? It’s kind of like Rey [Mysterio] with his son, how cool is that?”

“I don’t think so. I don’t think they will ever give it to a part time performer. I think that Randy Orton has a better shot at it, Randy will come back, he has to have surgery. But I certainly wouldn’t be offended because the real number is 21. They all have a way to go. But I love John Cena, he is a such a credible performer and just one of the great guys in the business. About 10 years ago they told John that he couldn’t hang around with me. No, like 2008, I would go out drinking with John, and John could drink some beers back then. But then they said ‘Hey, we would like you to hang around a bit less with Flair on those European tours. I didn’t take it personally.”

On what Ric Flair is grateful for:

“My health, my family and the world of friends that I have.”