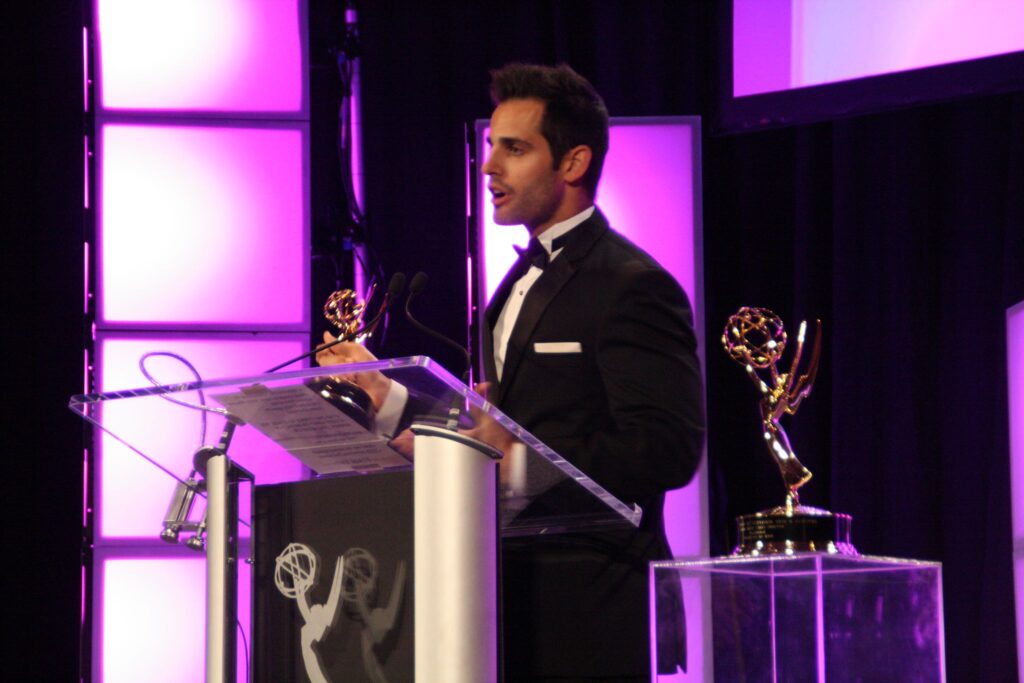 Chris Van Vliet On Being Laid Off, Starting Fresh & The Power Of Asking The Right Questions – My Interview on “Learn Speak Teach”

On this episode, Chris Van Vliet is a guest on the podcast “Learn Speak Teach” on the Real Business Connections Network hosted by Ben Albert. Chris talks about being laid off early in his broadcasting career and what he learned from that, the science of asking better questions, why gratitude is so important, changing your mindset and a fun rapid fire round at the end.

“I would say the biggest one, and look, I was super passionate about broadcasting. It was the dream of working in television or radio, but I had zero connections to make this happen. I didn’t have a cousin or an uncle who could get me an internship. So I think that was a big pain point for me early on, I had to figure all of this out on my own and how to get there.”

On being laid off:

“Fast forward a few years and I think the biggest pain point for me was, two years into my career I had a dream job. I was hosting a show on MTV2 Canada where I was interviewing all kinds of celebrities. Our show after me being on it for a year got cancelled after one big media conglomerate bought another one and they merged together. I was at work that day and typing on my computer, my boss came in and said ‘Everybody stop what you are doing, the show just got cancelled.’ It felt like in an instance that the rug got pulled out from underneath me and I had to figure out what do I do now? I picked up my life and moved it 3,000 miles to Vancouver, and that was a big one for me. It felt like I was living my purpose, but I had to re-evaluate and recalculate my purpose from there. But I am a really big believer that things happen for a reason, because if that didn’t happen then it would lead me to where I am. Because being unemployed for 7 months that led me to try and get an agent in the United States and look for jobs there.”

On what was next:

“When I got back home I was like this is not a vacation, I have got to find another job. It sucked. It sucked because things were going so well and one day it was all gone. My new job became finding a job and finding one that juiced me as much as the old job did.”

“I will say that this felt like my purpose even before that moment where I got to do my story at the internship. I was so excited to be there, learning the ins and outs and asking so many questions. I think that really helped, I was asking about shooting on tape and the editing system. It wasn’t until 6 months in that I really felt comfortable with the editing system. If I didn’t know me, I would believe what that person was saying, I felt like I was levelling up every day. Even if it was a 0.01 each day, I felt like I was improving. There is a thing called the stand up where the reporter speaks with the microphone and setting the stage, it’s usually one or two sentences. I would record the stand up 5 or 10 times saying the exact same thing. I would then watch it back in the editing room and hopefully pick the least worst take.”

“A lot of it, and it is uncomfortable too, is watching yourself back. You gotta do it. You will realize that you do the weird thing with your eyebrows and what your voice sounds like. Getting comfortable with meeting the digital version of yourself, that was part of it. Once you are comfortable with it, and that takes a long time, you look and go ‘I said a lot of this’ or ‘I did a lot of ums.’ I started cutting that out. I also started looking at people that were crushing it, looking at their skillset and making it my own. I think that was a really big thing. Tony Robbins says that success brings clues, if you take one thing from someone and put it in your toolkit. Then you take it from someone else, if you do that a dozen times, you have a pretty good set of tools.”

On going all in:

“For me, I just want to swing for the fences, especially in the celebrity interviews. If they are promoting a movie, like recently I was in Las Vegas interviewing Jamie Foxx and Dave Franco. You get 5 minutes with them, and they are answering a lot of the same questions doing 40 to 50 interviews a day. I learned that if you ask better questions, you get better interviews, so I have been trying to look for those moments that have never happened before. So if you swing for the fences and it doesn’t work, then you edit that out. But if it does work, my goodness you get an amazing moment. For instance, I got to rap Miami with Will Smith in Miami. If you don’t ask, the answer will be no, so why not at least ask.”

On back to square 1:

“I changed the home screen on my internet browser to be a job search website. That was a huge change for me. When I opened up Internet Explorer, that was the first thing I would see, so if I wanted to click away from something, it was like ‘Really? You don’t want to just take 5 minutes and scroll to see what is out there.’ I would use that tactic a lot, there was a sports radio station that I volunteered at, I also changed the home screen there to their website. That way I could see what was important to them and that was a huge help for me. I mentioned earlier that I made it my job to look for a job, and I was doing everything to edge myself better than the next person. I always got down to the final 2 people for a presenting job, and it would always go to the other person. Maybe they had more experience or was more recognizable in Canada. I was getting so frustrated, so I went well if I can’t get a job in my own country, I’m going to look elsewhere. There were so many opportunities in the USA, so I started spending my days googling TV agents. I sent this one cold email to an agency in Los Angeles saying that I am LA frequently, I was only in LA once in my life at that point, and I would love to come by. They asked when I would next be in LA, and I said it would be in the next month. I stayed in the cheapest motel I could in Hollywood, I was brushing away the cockroaches at the door. But the agency signed me and it worked out, they got me auditions. That got the ball rolling and got me to where I am at, but it would never have happened if I never had a clear goal on how I got there.”

Why Chris Van Vliet was hired:

“I think that I just had the momentum of being on MTV 2 Canada. I was a fresh face, which is important in Canada. Also it was low risk, if they sign me and I don’t get hired, well I’m the next one. I am guessing they liked my demo reel and they were like well let’s see what happens.”

On the big break:

“It wasn’t a break, but it was a very big audition. It was with TRL, Carson Daily was moving on and was replaced by Damien Fahey, then he was moving on and they were looking for someone to replace Damien Fahey. I am like oh my God, TRL? In Times Square? I actually had an interview at the TRL studio. In the end they didn’t hire me because they ended up cancelling the show. But to be in the final 2 of that conversation, it gave me the confidence that something is going to happen here. I think that was the really big one that made me look at things through a different lens.”

“I think it is about experimenting. Yes, I was early to the game, we are talking over 10 years ago with interviews from stars of The Hunger Games or Twilight or the Marvel films. But I was also early to the game of getting them to YouTube first. Henry Cavill would be talking about putting the Superman suit on for the first time, and I was sat in the airport trying to edit it so I could get it up onto YouTube first. It shifted a lot recently though, short form content is where all the attention is. I started a clips channel 2 years ago and really put time into it last year. It now has over 130,000 subscribers and the total views are now higher than my main channel.”

On going viral with short videos:

“I would say find a title that is highly clickable. Don’t be clickbait, but have a title that is clickable. Something like ‘This person explains this…’ What makes you want to click on an article? I saw all of these podcasters doing this and it made sense. Joe Rogan’s podcast is 2 to 3 hours long, asking someone to stay on their phone for that time is a huge ask. But if there is a 6 minute clip, that is much more suggestable.”

What makes a good question:

“It is always difficult when it is just one question. Definitely something that is not just a yes or no answer. If you can tie it into you and endear it to yourself somehow, it makes it a better question. I think also to go one layer deeper and make it into a question that has not been asked before. You always hear ‘What was it like working with…’ You always hear the answer of ‘Oh they were great.’ I take it one layer deeper to ‘What is one thing you have learned that you will take to the next set.’ That is when you can get that great soundbite, because they are revealing something they have never revealed before.”