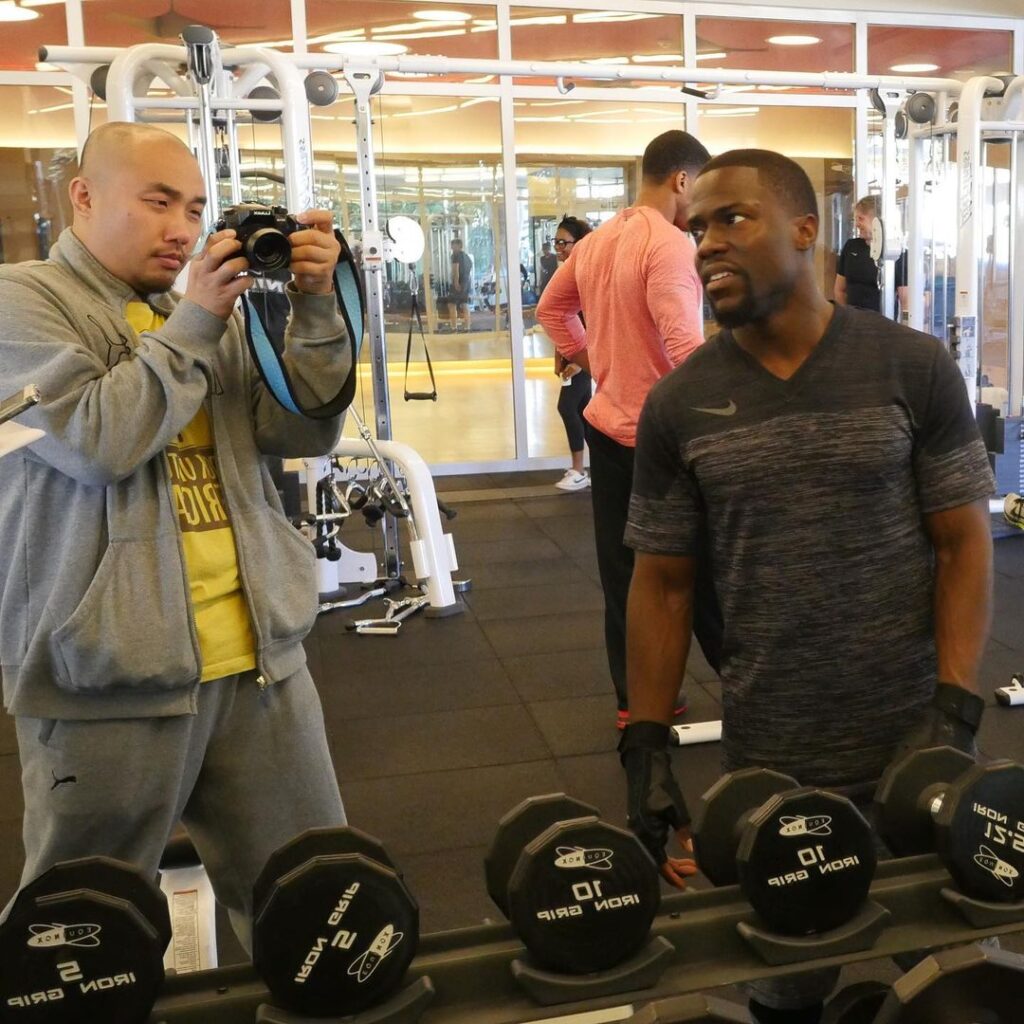 Kevin Kwan is the personal photographer for comedian and actor Kevin Hart. I have known Kevin Kwan for years and am absolutely fascinated by his story. In this episode we talk about how first fell in love with photography, getting his first job by cold calling a photography studio he found in the Yellow Pages, the first time he met Kevin Hart, being by his side as he rose to fame, how you can land your own dream job and much more!

On his love for photography:

“Yes, always loved photography becasue it’s capturing memories, something you can look back to. Right now it’s funny how Kevin [Hart] just posted that fatherhood is going to be on Netflix and he’s like Kwan I need some pictures for Netflix. I was ready and I’m like I’m on it! A lot of good memories from those photos. They were taken in 2019 and now it’s 2021.”

On moving to America from Hong Kong:

“We basically learned English from school. It’s like people from America learn Spanish and French at school, but they suck at it. When they go to France or Spain they can’t do anything. I’m the same thing, I know the alphabet but I’m 17 I come here. I move to Tuscon Arizona, so it was pretty much all Spanish anyway. If you know English it’s ok, if you know Spanish, you’re good. My dad had some cousins out there and there was an opportunity for me and my brother to go to college there.”

On using film cameras when he started:

“At the time, it was still film time. We were still 35mm. When I come here, you go to Walgreens or Walmart and you get 24 or 36 exposures on your film camera that I brought from Hong Kong. You take photos, drop them off, wait 3 days.”

On where he grew up and how he got started in photography:

“Tuscon Arizona. I’m like hey how can I do that, seriously it was still Yellow Pages. They drop off Yellow Pages twice a year. The guy was like people come to my studio and they want me to take the photo. I was 18 or 19, I guess Kevin Kwan got to make a name for myself. I just looked for photography studios in the yellow pages. Me, my dad and my brother lived together, there was no internet at the time. Anything you try to find, you have to look at Yellow Pages. I would go in like an intern and take the photos.”

On getting vital photography experience:

“I stayed at home. The guy was really cool. He basically had a portrait garden, it was in the desert. He does a lot of scenery portraits. Also, he has this big cactus and a barn, it’s almost Hollywood. So he had this whole portrait garden that he built, waterfalls and stuff. He said I’ll pay you some money if you mow the lawn, clean up, stuff like that. I was cursing up at the time, but I paid my dues. Someone did it to him, he’s successful. Everybody needs to learn.”

On how he made money while being a photography intern:

“My dad would prefer me staying at home. My dad bought a duplex and rented the other side out. The tenant finally leaves, my dad let me live there. I would be working and all I would need is food money. With photography, weddings were good money too. We are talking 20 years ago here, the guy was taking $3,500 – $4,000 a wedding. He would pay me $100 to do it. I was around for 6-7 hours, so good money. I also tried to pick up part time jobs too.”

On how he met Kevin Hart:

“Not until I moved out to LA. I couldn’t live in Tucson Arizona because it was too boring. I finished college and got my graphic design degree. Then I learned photoshop, which at the time was from a scan from film. I moved to Atlanta, then Maine, and in 2003 I moved to LA. I’ve got a lot of friends from Hong Kong that were studying out here. For the first 5 months, I got parking tickets every month, that was extra money I didn’t need to spend. I was working with my guy Johnny Nunes, he was shooting a gig in Arizona. It was a hip hop gig, and I faked that I knew hip hop. That was my first time shooting at a celebrity event. So I told people that I live in LA.”

“I met a couple of the publicists and they invited me to an event in LA. I just brought my camera to fashion shows, parties, events, still no money by the way. That was how I met Kevin. I met his ex wife, who was like ‘Hey I want to be in photography too.’ I said ‘hey how you doing I’m Kevin.’ She then said ‘My husband is named Kevin too.’ And she brought me over to meet him, this was 2006. I didn’t know who he was, I asked what has he been in, and he was in Soul plane at the time. My room mate had the DVD, so we watched it, I had no idea what was box office or anything about movies. I kept running into him and we became friends. He asked me to take pictures for his kids birthday party I’m like yeah sure. I did weddings and families, so this was perfect. I went to his house and it became personal. He wanted family photos and we just talked, texted and kept in touch. He invited me over for Thanksgiving too.”

On when it really took off in his photography career:

“It was 2006 when we met and for a couple of years until about 2009, he was going into bigger tours. I didn’t realize bigger artists travelled this much. He was like, I’m going to take you on tour. He had this tour Laugh At My Pain. I just get on with his travel agents and he flies me out. We would be in 4 cities in a week, and then we would come home.”

On what he won’t photograph in Kevin Hart’s life:

“Most of the time, private time. Some of the private time, you will see. I already know what to put out and what not to put out. Like I’m not going to go into the bathroom when he’s in there. We don’t have to capture everything, I would just film with a purpose. I was on their honeymoon, that’s how close we are. I didn’t think I needed to work for his honeymoon, so I arranged to go to Hong Kong with my fiancée at the time. We book our tickets and everything, then Kevin was like why don’t you take photos of us on our honeymoon. I was like yeah sure.”

On where Dope-pic came from:

“A lot of times I would send photos to Kevin, and he would be like this is dope. Then we were like I’m going to be doing dope pics. Kevin then started the hashtag #DopPic so I tried to trademark it. When Crazy Rich Asians came out I’m no longer the only Kevin Kwan, I’m John smith number 423. I actually have a LinkedIn profile where people message me asking if I wrote Crazy Rich Asians.”

On his preferred cameras and his collection:

“Sony is the easiest right now. People ask why, if you shoot something you can just press a button and the picture is sent, like if Kevin likes it. I definitely own over 20 cameras though. When someone is shooting a movie, I would probably take over 20,000 pictures. The good thing about digital photography is no film.”

“My family, Kevin Hart and all my friends.”