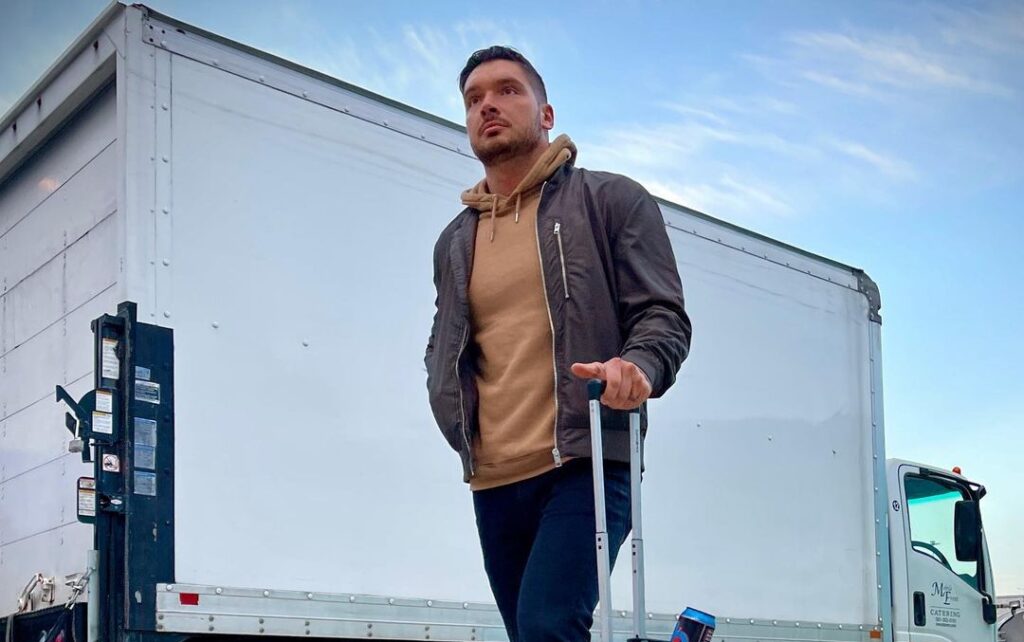 Ethan Page is a professional wrestler and YouTuber currently signed to All Elite Wrestling. Ethan joins Chris Van Vliet from his home in Hamilton, Ontario, Canada. He talks about what it meant to debut at AEW Revolution, being a huge fan of The Rock, his goals in pro wrestling, how he came up with his gimmick, his alter ego “The Karate Man”, his former tag team partner Josh Alexander, how AEW is different from Impact Wrestling and much more!

On now being a part of the AEW roster:

“I was trying to explain it to my wife because its been… I mean I’ve known for a while but I’m still on this weird high. Now I debuted on a pay-per-view I’ve had my Dynamite debut. But I still can’t comprehend that I’ve finally been able to achieve my dream. Because it’s like your one step closer, one step closer, one step closer. I’ve never actually made it to the point where I had envisioned from when I was a kid. I don’t even know how to digest it or comprehend that it’s happened. It’s great obviously, but I can’t explain it.”

“The exposure is like nothing else. The reach that AEW has around the world is like nothing else. I’m going to bring my wife up a lot because she has been on this crazy journey to get to this point and has trusted blindly that I would find a way to make it happen. But I talk to her about this all the time, and she was blown away by the fact that locally in my hometown of Hamilton Ontario, I made the cover of the sports section of our newspaper. Family members mildly scoffed at the fact I’m a professional wrestler and now they’re like ‘wow, congratulations. I’m so proud of you, been bragging about you.’ I think there’s an undeniable amount of reach and exposure and importance of AEW in the sports entertainment world.”

On having to keep quiet on social media about his debut:

“It was a perfect storm, especially for me who is so actively vocal on social media. It was hard for me to be silent for so long, but I think it was worth the wait. I hope fans can agree.”

On some fans not liking his current character:

“You’re probably right, which is the craziest part because I consider myself to be a professional wrestling traditionalist and purist when it comes to how I perform and how I execute my matches, my promos or my character. But at the end of the day I want to be credited for the work that I put into this. My career is reaching 15/16 years. There’s been so many instances where I did not have a say in my name, my character, the way I was represented or presented. It’s amazing now being in AEW, the creative freedom and trust that they give their talent. They let them play the character they want, so I can now be the full on “All Ego” Ethan Page that I’ve always wanted to be. I’ve pushed the played by Julian away more now I’m in AEW.”

On why he didn’t sign with AEW at the start:

“I know there was definitely interest, but at the time I was under contract with IMPACT, so it wasn’t really a possibility. But yes, I was I guess spoken to, to see what my situation was. But me personally, I’m very glad with the way it played out and getting to have those years with IMPACT Wrestling. It was an experience that I kind of needed, to grow personally and professionally. It’s like to get those reps in, to get comfortable being on television, timing, cues all that stuff. It made me a better performer in the end. I think AEW will benefit from that now that I did have those experiences.”

On now being a singles star:

“I’m very proud of what we accomplished as a team, and if there is potential down the road for The North to do a tag team then I’m in. I think now, especially for both of us, it’s best to venture off into singles, I’ve always wanted the spotlight to shine on me. So this is a Natural fit for “All Ego” Ethan Page. I had a singles run with Evolve prior to IMPACT Wrestling, so I’m comfortable with both, so I’m excited to see what happens.”

“Yes, but because I took those 4 months off, it’s exciting to be back at it. The way my brain works and the way I operate on a daily basis I need projects. I need work, I need to put something out into the world and be like hey I created this, I made this. So right now it doesn’t feel like work at all, I’m already 3 weeks ahead of editing, because I’m so excited to piece of all of these vlogs together. It is a lot of work and takes a lot of time, but repetition is key with everything. It’s a lot of work but it doesn’t feel like work.”

On his Karate man perosona:

“It was almost out of necessity, because there was so little going on with the pandemic, especially when it first started. No one really knew what was going on, there was a very limited amount of independent events. At the time I don’t think I was able to cross the border to film for IMPACT, we were doing shoots in Canada to put on the TV show there [USA]. I needed to create something I could do with myself, and tell a little story on my YouTube channel and make merch. It stemmed from a joke in a promo backstage, through my feud with MMA legend Ken Shamrock. I thought I should be karate man, which is the most insulting thing you can say to somebody. Once it caught on online, I’m like oh there’s something here, it’s organic. Then it slowly started monetizing.”

“Every time I see Rey Fenix wrestle, I want to burn my wrestling boots and retire. He is so good, I would love to test myself [against him]. Anyone on the roster would love to wrestle Rey Fenix.”

On his debut match in AEW:

“Nobody knew I was debuting other than my parents. So they got the pay-per-view at their house and threw a little pizza party. My daughter is there, my wife is there. They made an AEW cake with the world title on it, they all wore my T-Shirts. But I think for my dad to see Jake the Snake clothesline me on a pay-per-view is the most full circle moment, because my dad is the one that introduced me to wrestling. We would watch in the early 90’s. Taking that line from Jake was cool for me, but I can’t imagine how cool it was from my father.”

“This job, my family and The Snyder Cut.”