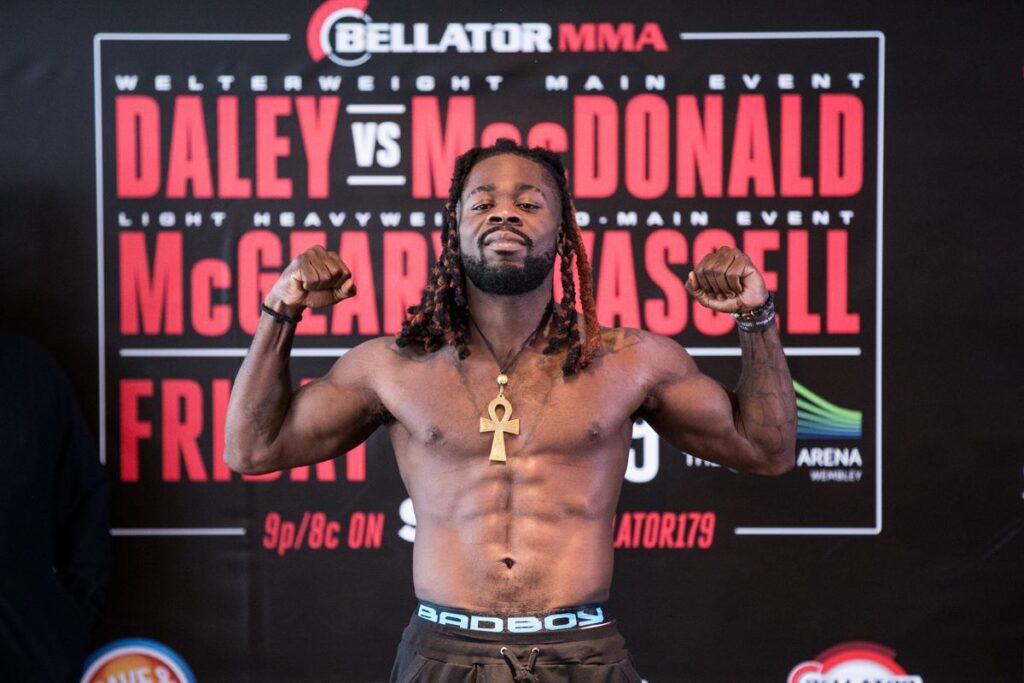 Kimbo Slice Jr. On Following His Father’s Footsteps And Creating A Legacy Of His Own

Kimbo Slice Jr. is an MMA fighter, entrepreneur and the son of the late legendary bareknuckle fighter and mixed martial artist, Kimbo Slice. He joins Chris Van Vliet at his home in Los Angeles to talk about following in his father’s footsteps, creating a legacy of his own, growing up in Bahamas and Miami, his fights in Bellator, where he wants to fight next, his entrepreneurial ventures and much more!

On continuing his father’s legacy:

“So I always say this a lot. At first, you would think that I was following in his legacy, because it’s like [people think] “Oh his dad’s a fighter so he’s a fighter…” But this is something that I grew up doing and it’s something I love to do. So in a sense, yeah, I am following in his footsteps and creating my own. But now, at this point in my life, I don’t want to be known as just an MMA fighter or Kimbo’s son. I want to take it to a new level. I want to branch off into the business world and create my own legacy while continuing my dad’s legacy as well.”

On if he inherited his father’s fighting skills:

“Oh yeah, 100%. Honestly, I think I am a little bit better than my dad, as crazy as that might sound. Just because my dad didn’t run and he didn’t really train for most of his fights. He just went out there and fought these guys who were training 6 weeks to fight him. I’m training every day, I’m running, I wrestled in high school and in college. I did jujitsu for 2 years before I turned pro, I have a lot more background in fighting than my dad did in a sense.”

On his fighting style:

“I’m well rounded and I like to play on the ground a lot, that’s my thing. I feel like in the stand up part anybody could get lucky. If me and you have a fight and you throw a bunch of punches, one might land and do a lot of damage. But if I grab you and take you down, that’s a different ball game. When you get on the ground, you have to know what you are doing, you can’t get lucky on the ground.”

On realizing who his dad was:

“It was in 8th grade. When I was in 8th grade my dad had his first fight with Ray Mercer. It was the biggest thing popping and they couldn’t sanction a fight because they didn’t know [anything about Kimbo Slice] . My dad wasn’t a fighter and he wasn’t a pro, but Ray Mercer was a pro. You bring this guy from the streets to fight a boxer who killed someone in the ring, no one knows what is going to happen, so they can’t sanction it. So the match was an exhibition, it was all over the world and all over TV. He [Kimbo Slice] beat him and from that point on it blew up.”

On the name Baby Splice:

On deciding to become a fighter:

“So I can’t work the 9 to 5, there is not enough money in that. I needed to make a decent amount of money and fighting is something that I am really good at and have been doing for so long. I have to fight to get to this level where I am at now. I’ve done the fighting and got my name from there but now it’s time to do something more. It weighs on your body, this fight thing is rough. I turned pro at 24, I’m 29 now. My hands are all beaten up, I tore my ACL in a fight, it’s brutal. I do love it, but I love my health and I love my body more than the sport in itself.”

On Jake and Logan Paul:

“Yeah I definitely respect them. A lot of people hate them and say that they are not real fighters, but just get with the way and pay attention to what’s going on. These guys have millions of followers, put a lot of eyes on the sport. They are making the celebrity vs. fighter aspect fun again. I feel my name alone could get me a fight with any celebrity. I’m not going out there trying to kill you, let’s just go out there, have some fun and make some money. But if you try and come out with some crazy punches, I might hit you with a body shot or something. I’m definitely going to win, but do it in a nice way.”

On what he learned from his dad:

“Don’t depend on fighting. I could get hurt, and sometimes you have career, or even life ending injuries. That messes you up, and I have to think about that a lot. Now I think about it more than ever because of what it is doing to my body. Nearly everyone does not go into a fight 100%, they go in with an ache or a pain. But that’s just how it is on this level, it is what it is. I just know who I am and I need to be smart and use my head, just like my dad said. It ain’t all about trying to prove a point.”

On finding out about his father’s death:

“My stepmom called me, then my father’s manager Mike called me and he was just like [nods head] yeah. Then it was just like a media frenzy. I had just moved from Florida to Long Beach not 3 months before. I didn’t go [to the funeral], I’m not a big funeral kind of guy. The sinking and the negative vibes, it’s just too much for me. He was cremated and there is a memorial site too, but I won’t go there. What’s the point? I don’t need to go to a site, that’s doing nothing for me. It’s more of an energy thing right now.”

On how his dad’s influence saved him:

“So there was a time where like… So I was living in Miami, and Miami is horrible. I get out of college, move in with my mom and I’m like this is not it. I came from college in San Francisco and I saw a different lifestyle, and I’m like well I can’t do this forever. So I end up selling my car for $2000, and I blew it all on smoke, whereas now I haven’t smoked or drank for the past 5 years. Now I am stuck, I’m broke, living with my buddy and his family. They are so nice that they won’t say ‘Hey, you’ve got to get a job.’ They were with their son like ‘He’s my son he can move out whenever he wants to.’ And they were like that with me.”

“I’m not talking with my dad at this point. I can’t say ‘I’m living with my buddy and his family and smoking weed every day. Knowing how he raised me, how can I tell my father that? In my head I hear his voice telling me ‘You have to do something, you can’t do this forever.’ I’m like OK, enough. I get a job at a gas station, then I pay $200 a month in jiu-jitsu training. I do that for 2 months, do an amateur fight and knock the dude out cold. When I heard his voice that changed my life. So I talked to my dad after 6 to 8 months, when he asked why I didn’t call, I responded ‘Well what was I going to say? I wasn’t doing anything right with my life, I can’t talk to you. I stopped talking to him because I was so embarrassed, but I would still text him. When I got everything rolling, I called him and thanked him for how he raised me.”

How everything happened so fast:

“I fought in November 2015. In January I am in California, when I turned pro at 24. February and March, he hosts a signing for me, but this whole time he is in and out the hospital. April and May comes around, I am back in California training, but in June he passes away. That’s how quick everything happened.”

“It’s like 50/50. They say that pressure bursts pipes and pressure creates diamonds. With me, pressure is easy. My dad used to put me under a crazy amount of pressure. I’m 18 and I graduated with a 3.5 GPA. The next day my dad said to me ‘You have to leave the house when I leave the house to go and get a job.’ I had no room to chill, I had to get up the next day to get to the office and get a job. I never had that chance to relax. I am the oldest, so no one else got that treatment.”

On adopting his dad’s hairstyle for a fight:

“There’s no way! I’m just gonna be honest here, it’s not happening. This hair took me a long time and I started it when I was 18. But that was his style and he knew how to make it look good. People sometimes called him Mr T, he hated that! But if someone came along with enough money, yeah I would do it.”

On his other goals:

“Just to become a businessman. I am working on a lot of big things, I can’t talk about it too much, but I have something coming out like my own crypto, but bigger. It started off as my own crypto, but it just grew and it’s gonna be huge. I also have this show in Miami that is in the works, and it’s going to be big. I’m not saying I don’t love fighting, but I just love business even more. Going to the office and having meetings, that’s really fun to me. I am getting older and my body is getting beaten up, I shouldn’t feel this way at 29. It’s time to start using my brains before I get knocked silly.”

“My team, my wife and everything my dad has taught me.”