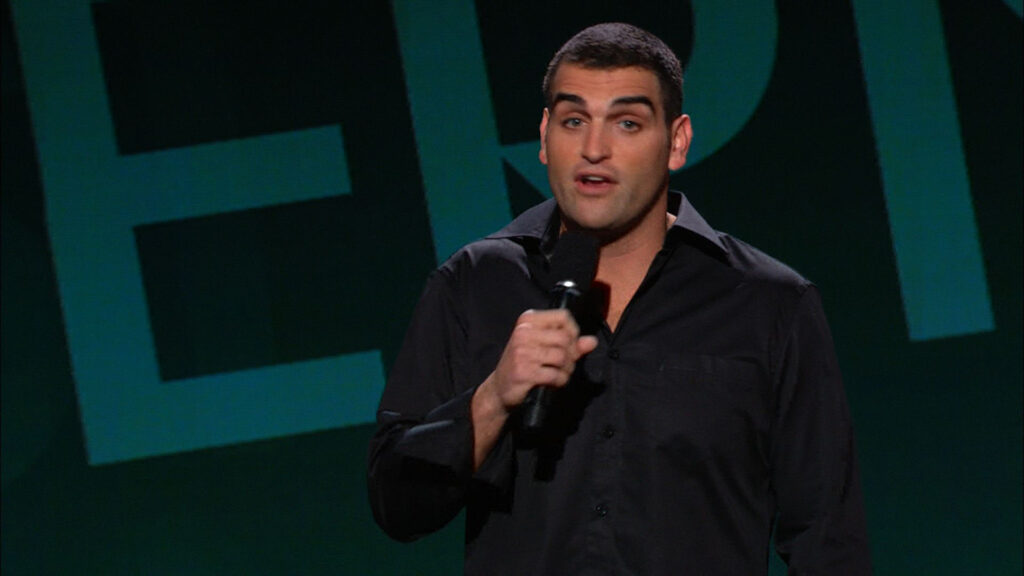 Bret Ernst is a stand-up comedian and actor best known for his role in the Netflix series “Cobra Kai”. He talks with Chris Van Vliet from his home in Las Vegas, NV where he talks about his inspiration for becoming a comedian, what motivates him, his process for writing a joke, how he became the commentator for Wrestling Society X on MTV and much more!

On how he looks so youthful:

“I don’t know really. I don’t drink, smoke or do drugs. Mostly I just try not to stress. Or it could be down to my Sicilian parents [laughs]. I drink every now and again, but sh*t happens.”

“I only did one show online and that was a memorial show for a buddy that passed away. It was for the comedian Eric Myers. I kept going, I didn’t stop. For the first few months there was no action during COVID. But I was in Florida. Things started opening up and people were saying ‘Screw this!’ As things were progressing I was slowly able to travel to other states that were open. I just kept moving with it. Obviously we were taking pay cuts, but I had known a lot of the club owners. If I could help them, we can try and keep everything afloat.”

On how he creates material:

“There are two types of comics. You have ones that write, and ones that write on stage. I write on stage. I come up with an idea, write it down and it will remind me of what I want to talk about, then I will go and talk about it. I’ve been doing this for 24 years, you have your own style of creating. I am a lazy writer, but once I start honing it in I will touch it up. “

On growing up and early aspirations:

“I wanted to play for the Dallas Cowboys. But I never really thought about it that much. I have always liked clowning around, I went to rough schools. I was good at sports, so I got respect that way. Also I was a scrappy kid. I wasn’t toughest but I could hold my own. Also I would try to make people laugh, and I got in a lot of trouble because of it. That’s why my special on YouTube is called Principal’s Office. I went to 15 schools. My mom was constantly coming into the office. It was more the attention that drove me. Once I saw Eddie Murphy’s Delirious, I was like this is what I want to do.”

On how he got into stand-up comedy:

“I played Football at university, I was always cutting it up in the locker room. I presented my thoughts as if I was performing. It hasn’t changed from that to the style I use now. Once I was done, I went to Miami and asked around. There were comedy clubs that were doing open mics. But I got home and there was a letter from a guy in New York. He said there was a show and I should do it. That was what pushed me to go that way.”

On where he thought it would lead to:

“I don’t know to what degree it would take me, but I’ve done it for 24 years. Everything I own is because of it and friends I have made became comedy legends. There were times where I thought I may have to change career paths. But something kept pulling me back in. When I lost my agent, I was like I am done. Next thing I know I get a call and I just keep coming back.”

On how he powers through on his worst days:

“Just remembering that I am doing what I love. On my worst day, I lived out of my car. I would shower at the gym, I would crash on couches. I have been on my own most of my life and I was OK with it. But when I got married, my wife wasn’t OK with it, and that was where the stresses came in. When the person you love the most suggests that it might be time to reconsider, that was difficult for me. I had to stick with it. I said to her ‘Don’t let me second guess myself.’ We hit a rough spot, but I had been there 30 times, it was her first. But the light shines though and you got to stay the course.”

On what makes a comic successful:

“Getting people to buy tickets. It is a business for us. The gift would be being on a sitcom, because you are famous and can then do stand-up. Jay Leno never stops and Seinfeld still gets up. It’s just who you are. Getting on a show will boost you up. Cobra Kai is boosting me up too. But now fans are like it’s the guy from Cobra Kai, not oh he’s the guy from stand-up. But now we get whole families coming up to me. I was at a comedy show and this family saw me. They were like ‘what are you doing here.’ I respond ‘I’m performing here.’

On what Cobra Kai did for him:

“It just reminded people that I am still around. I have people I’ve known for 20 years reaching back to me going ‘Dude, great job.’ I left Los Angeles in 2017 and moved to Ohio. Then I got a divorce, moved to Florida and lost everything. I got divorced in COVID. We were together for 11 years, but then separated and living in the same house. But I was on the road a lot, it’s a lifestyle as an entertainer. I like the hustle though, I always have something going on.”

On tips for aspiring comedians:

“One of my favourite quotes is ‘It’s none of my business what you think about me.’ You have every right not to like me and I don’t care. I have that naturally. I would say the successful people soar with the eagles not peck with the crows. A lot of people do 3 to 5 minutes in a coffee shop or club every so often. But they are more into the scene than the actual artform. It’s like there are 8,000 people in Hollywood who claim to be actors. The successful people just worry about themselves and know they are not competing with anybody.”

Featured image: Journey of a Frontman