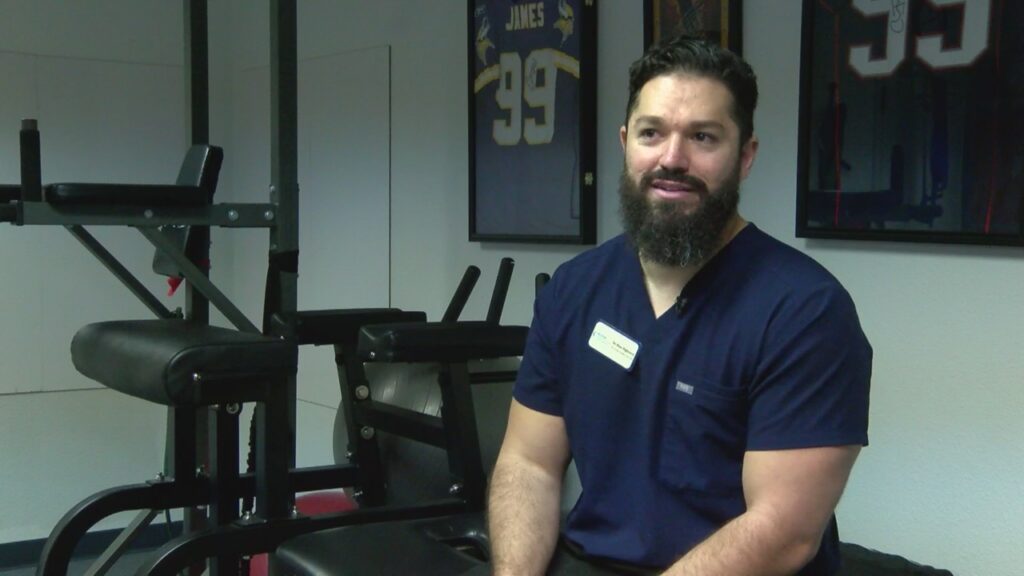 Dr. Beau Hightower is a Naprapath, Chiropractic Physician, Certified Exercise Physiologist, Certified Strength and Conditioning Specialist, Master of Science. He joins Chris Van Vliet from his clinic, Elite-OSM in Albuquerque, NM. He talks about how he became YouTube famous for his work as a chiropractor, working with UFC fighters and WWE and AEW wrestlers, how he met his wife Lais DeLeon, his hammer therapy techniques, being a member of MENSA, Joe Rogan’s critiques of chiropractors, making more money from YouTube than from his clinics and more!

On how he got into chiropracting:

“Way back in the early 90’s I was a big football fan, wrestling fan first. First I liked the 49ers, so I was into Joe Montana and Jerry Rice. At the time, they had a chiropractor that was showing up on network TV with them and they were saying ‘Hey this guy helps keep me in the game.’ When I bandwagon jumped to the Dallas Cowboys in the mid 90’s, they also had a chiropractor. Tiger Woods, Arnold Schwarzenegger, they all had chiropractors. So when I got to high school, I was having some back issues. My parents had always gone to a chiropractor whenever they had pinched a nerve or had a rib out or something I would go. I would notice that I would run faster or have less back pain when I would get adjusted. That was how I became a patient. Then I played college Football.”

“I was a biology major originally, that was my first bachelors degree. I then came to find out that you can’t be a biologist from just a bachelors degree. You need a PHD in biology, and even then you only make $60,000 a year. I wasn’t super into anything other than insects, so my specialization was entomology. I grew up playing Pokémon, so it was like a real life Pokémon collection. You would catch a beetle, and pin it up, gotta catch them all. I wanted to go down that route and they were like ‘Kid there’s no money here.’ Well shoot, what else am I interested in? At the time I was into bodybuilding, after I got out of football.”

“I started thinking about it and my chiropractor played a lot of golf, had long lunch breaks, that might be the career path for me. So I started looking at pharmacy chiropractic physical therapy. I was strongly considering pharmacy, but they said 99% of the jobs in pharmacy will be in retail. I didn’t want to work in a CVS or a Walgreens necessarily, thank god people do though. To have somebody yelling at me why they’re medication isn’t covered etc, I didn’t want to do it. So I started applying to chiropractor school, I got into Parker University in Dallas and that was in 2007.”

“I went through that program, I joined a company in Texas, worked with some UFC fighters in Dallas and San Antonio. I then moved to Cincinnati, then Columbus where I worked with their Olympic team for about 8 months. Finally, I moved back to Albuquerque New Mexico and a couple of months after that I joined Jackson-Wink MMA, which is where I’m broadcasting from now.”

On where his unique treatment methods came from:

“It came from a lot of places. I do have a masters degree in Exercise Science, so when I got to chiro school, I was really good at diagnostics. With chiropracting, the education model is almost identical to medical school. So you take all these crazy classes, immunology, geriatrics, paediatrics, OBGYN, you have to take all these board exams on things that really don’t have anything to do with your clinical practice. So one of my criticisms of chiropracting education is trying to be too much like medical doctors, despite not having the same scope of practice at all. Unfortunately through that process, you don’t know how to treat muscular-skeletal conditions that well because you’re too busy trying to play primary care physician but without prescription abilities.”

“Immediately, I started to realize that there were holes in my treatment arsenal, so I started looking for things that would help me. So I took some soft tissue courses, and I ended up pursuing a second doctorate in nephropathic medicine, which are soft tissue connective specialists. That blended with our rehab education and meeting with some doctors from Holland and Thailand that did the hammer and chisel, and just trying to throw out the stuff that doesn’t work very well and keep the stuff that does.”

On why he uses a hammer and chisel:

“What we are trying to do is get a really specific movement of a very specific bone. So when you do a manual adjustment with your hands, you’re sort of opening up everything. When there’s multiple cracks, that’s multiple joints being opened. So using the hammer and chisel, there’s other forms that are similar to it, like activator for example. The activator is like flicking somebody, it’s not enough force to actually move anything. So sometimes, you got to get out the hammer if you want to get the bone to move.”

“It was blind luck. I started a YouTube channel 14 years ago in 2007. I didn’t really post anything. During my masters degree, I was posting functional movement videos. My Instagram took off first. Historically what I was doing was sponsoring some of the fighters and saying we will comp your treatment, we’ll sponsor you for a camp, just put us on your shorts and show us some love on social media. By doing that, it grew up my Instagram pretty quickly. We filmed some popping of UFC fighters on Instagram, it hit the search page, over 1 million views. Next one 500,000 and 600,000. We were all like what the hell is this? Turns out there’s a weird ASMR fetish thing with cracking. A lot of people are in pain and they want to see other people get worked on, and you add that to the layer of MMA fans. So I took some vertical bone videos and threw them up on YouTube. What do you know, 3 million views, 5 million views.”

“I just happened to be at the front of a very weird edge of the chiro YouTube movement, one of the first ones to put videos up. It went gangbusters, the algorithms loved it, it was kind of like a Dr Pimple Popper type thing. We were like if we added interesting people in that would be cool too. From Instagram we had other athletes reaching out. We were like can we film this? Little by little it just kind of took off. Obviously then the algorithms changed and every chiropractor put their videos online. I’m just super lucky that I am one of the first to do it and having a lot of well known patients right off the bat.”

On people not agreeing with his practices:

“It comes with the territory. It’s funny because people are like you’re not a real doctor. OK cool, whatever you want to believe. We have patients that appreciate what we do, and there’s a ton of literature out there that supports what we do. Things are going to be polarizing, if we have learned anything in the world is that everything is polarizing. Whether it’s vaccines or the Earth being round. This is America and they are welcome to their opinions. By all means they don’t have to get treatments, they can grab their surgical knife any day they want to.”

On how he gets material for his videos:

“So typically, once every month or 2 months we will hit a city, and I will have a list of people who have reached out to me wanting treatment, 99% of them have reached out to me. We’ll collect 8 – 10 videos during that time, my wife comes with me. She will film and edit the videos, and we will put them up every week or 2 weeks until we run out of content. We follow the rules by state. In New Mexico there is a face mask mandate, but there isn’t in Florida. We do that for a week and then I go back to my regular job for 3 – 4 weeks.”

On if anyone can be treated by Dr Beau:

“Not during the pandemic but typically yes. we’re not taking on any new patients until our governor lifts our health order, because we are required to have our quarantine a week, we can’t just have people randomly coming into the office like that. Once the health order is over, we take new patients. We have people flying in from all over the world, Saudi Arabia, Canada you name it. They just come in like regular patients. They will come in 3-4 times a week, get themselves sorted out, we teach them how to take care of themselves. 99% of people we treat are regular people.”

On advice for aspiring YouTubers:

“YouTube wants you to be niche. So find a niche and be consistent. Make sure your thumbnail game is on point, pretty big deal. Give the people what they want not what you want to give them. If people are giving you feedback and you want to grow, you have to give them what they want. You have to offer value to your audience. Collabs are also great. Trying to figure out the new algorithm each month is the name of this game.

“To be healthy, my family and the opportunity to make people feel better.

Dr. Beau Hightower can be found on Instagram here.

To watch Dr Beau work his magic on Chris, check out the video below: