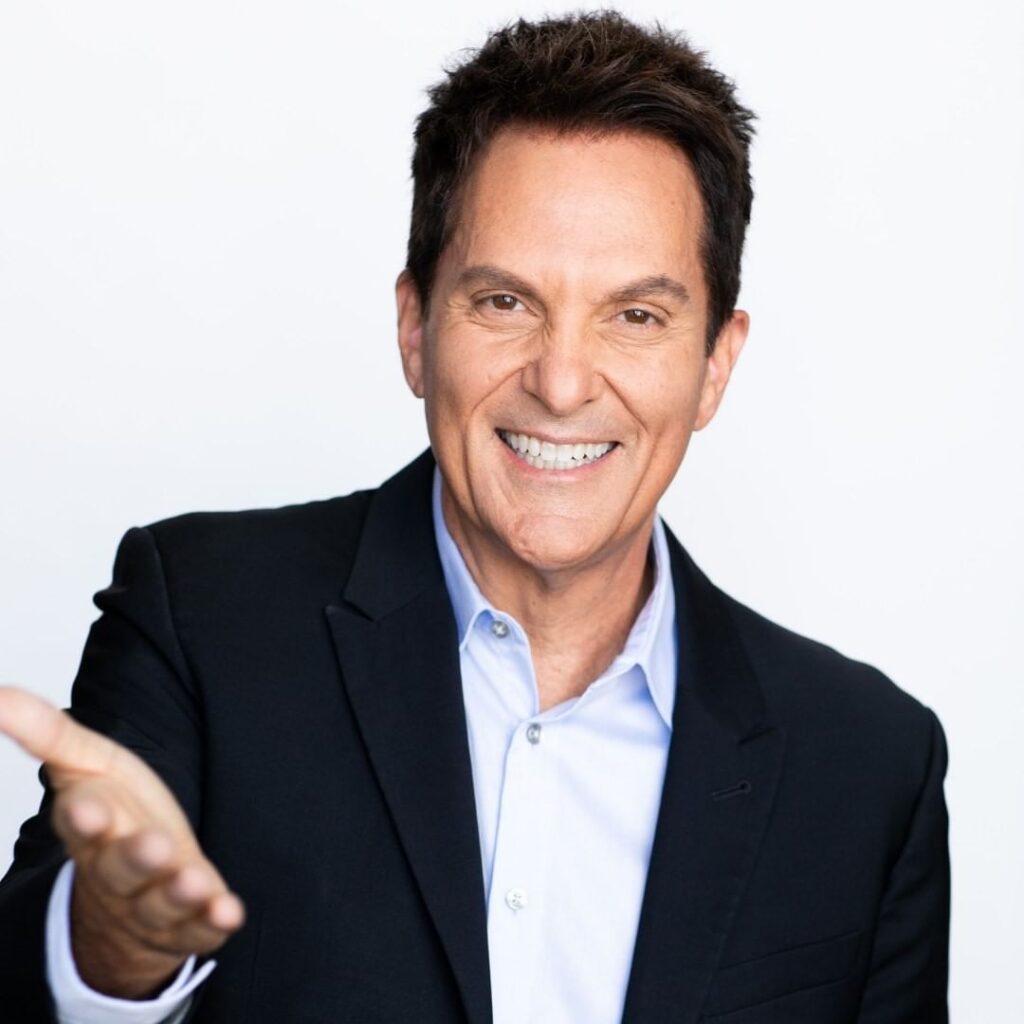 Voice coach to the stars Roger Love appeared on Insight with Chris Van Vliet. They discussed the beginnings of his career, working with stars, and if anyone can sing. Roger is the #1 celebrity voice coach in the world as has worked with performers like Eminem, John Mayer, Bret Michaels, Selena Gomez, Tony Robbins, Brendan Burchard and many others. He also taught Bradley Cooper how to sing for the film “A Star is Born”, he did the same for Reese Witherspoon and Joaquin Phoenix for the Johnny Cash biopic “Walk The Line” and helped Jeff Bridges win an Oscar for his performance in “Crazy Heart”.

On people utilizing their voice more:

“The number one makeover people should be thinking about taking is a voice makeover. It’s usually at the bottom of their list. They think a new hairstyle or reading another book will get them what they want. But they are not thinking about the fact that they are opening their mouths, and people will be making judgements about them based on the sounds that they are making. We are all born with a voice, and we learn how to use it when we start to learn how to use words. We memorize the sounds of the people that are speaking to us. If your mother speaks airy, as soon as you can speak, you want to connect to her. So you will speak like her. If your dad speaks more masculine, you will speak like that. This is not the voice we are born with, it’s the voice that we ended up with. We are imitating those that we formed connections with. It’s time to start figuring out what do you really sound like? Maybe there is a reason why you hate your own voice.”

On transitioning from singers coaching singers to coaching actors and the differences between singing and speaking:

“People think that there is a difference between singing and speaking. I started as a voice coach and just taught singers for 17 years. At 16 and a half I was a coach for The Beach Boys, Earth Wind and Fire, and all these other amazing artists. Then, after 17 years, speakers started coming to me. Initially I told them thank you but I am a singing coach. I’m good at helping singers open up their mouths, and figure out what sounds should come out to influence millions of people. Eventually, the actors (Tony Robbins, Jeff Bridges, Reese Witherspoon) just kept coming. They all thought I was a speaking voice coach, so I decided that I was going to start working with speakers.

At first, I believed there had to be a difference between singing and speaking. After I learned and studied everything I could, I came full circle and I was wrong. There was no difference between singing and speaking. Singing is about melody, volume and pace. The same thing exists in the speaking world, it’s just that no one was focusing on teaching people how to add those musical influences in peoples speaking voices. All of a sudden I loved working with speaking voices. When you teach someone to sing, they can sell more songs and more tickets to concerts. But if you change the way someone speaks, you can change their life!”

On the steps to take to make your voice improve your life:

“There are 3 things. First, If you speak well, you can control other peoples perception of you. The number one fear in America is public speaking. I understand it, the reason we are afraid to speak in public is because we are afraid of being judged harshly. Secondly, if you know how to speak correctly, you can move people emotionally when you speak. The third thing, when you can speak really well, you can control the outcome of every communication that you have. You have to attach emotion and sounds to your words. We live in a world where saying the right things will give you a great life. The words aren’t doing it, it’s the sounds attached to the words. The brain doesn’t want logic first, it wants emotion first”

On how it began:

“It began with this little kid who if he was happy or sad, he would sing and it would change the way he felt. So I would just sing all the time. I figured I had to be a singer. When I was 13, I finally convinced my parents to take me to singing lessons. They took me to the most famous singing teacher in the world. 3 years later, he left to go to Canada. Before he left, he asked if I wanted to teach after school. The problem was I had no idea how to teach. He said “Don’t worry about that, I will pay you $100 an hour.” I then replied “I will be there Monday after school, and I will have business cards printed.” I show up on Monday, my first student was Brian Wilson from The Beach Boys. I have no idea how to teach voice. I’m sitting in front of a piano, Brian is there and it’s go time. He’s paying for this lesson and I want to get paid too. Everything in me wanted to say sorry to Brian and pay for his gas. I didn’t do that, I just gave it a whirl. I faked it until I made it and 6 months later, all of the top stars decided they wanted to stay with me. When the teacher came back from Canada, he made me junior partner. My career path was set at 16 and a half. I was going to finish high school and go to college, but I’m going to teach voice.”

On working with Tony Robbins:

“Tony is a very unique case. Imagine Tony is in high school, and all of a sudden he grows 2 feet in almost no time. When that happens, it affects your body in different ways. Imagine your vocal cords grow fast too, so they can barely fit inside of your voice box. There were some physiological things that happened where it was difficult to create sound based on the growth he had. The main reason he and most speakers came to me is because they are losing their voice, and they know I can make it so they don’t lose their voice again. I helped Tony work with his voice, so he couldn’t lose it. He could do 3 and 4 day events, and be really present and influential. We started working 30 years ago. He was already really famous, but he was losing his voice. At the end of the day he had no voice. At the start of the next day, he was really hoarse. Almost every morning we had to rebuild his voice. I just made it so he just had to do vocal exercises every day, and he had 30 years with no problems. His voice is not perfect, but it’s based on a certain physicality that is unique to him and his vocal cords.”

On preparing Bradley Cooper for A Star is born:

“Bradley Cooper wanted to sing opposite Lady Gaga, and he wanted to sing the songs live on set, not pre-record them. That is what is going to go out on the film. We worked for an hour, every day, for 6 months. I said “what do you want to use your voice for?” He said, “I want to sing.”

On the pandemic and adapting to video calls:

“I’ve been doing video sessions for 10 years, because I can coach all around the world. When COVID happened to world, I had this media down. There’s a way to communicate on camera, and have it be very connective. It didn’t hinder me as far as presenting content and teaching. Zoom is very intimate and very focused. If you allow it, it can be very connective. It wasn’t COVID that stole our voices, it was the internet. We started talking less, emailing more. We started thinking we could live our whole lives via email. When you think about it, how to we showcase emotion? We have to put in emojis, because the words don’t mean anything. I love the internet, but it stripped us away from one on one communication. Now, at least we are forcing people to do more audio text, using zoom etc. I think of it as an audio correction. When COVID is over, the ones who can speak will be the ones that will create the most change.”

On if anyone can sing:

“The answer is yes! Anybody can learn how to sing. Just because you sing along to Bruno Mars, and when you go high you go ouch, doesn’t mean you can’t sing. It just means you haven’t learned how to use your instrument. I say anyone can learn how to sing infinitely better than they do now. I’ve been the go to guy to help actors/actresses sing, that’s why they hire me. If you asked Joaquin Phoenix, who never sung before, to sing happy birthday, he wouldn’t be able to hit all the notes. He went on to sound exactly like Johnny Cash in Walk the line. I only had 3 and a half weeks to work with both Joaquin and Reese Witherspoon.

When you have the best technique, you can teach anyone to speak or sing. With a piano, you can play with 10 fingers. You ask someone to play, and they play with one finger. I then show them how to play with all their fingers. It’s the same thing with voices. I show them how to make all these notes. There’s chest voice that is thick and low. Then there’s head voice, which is higher and sweeter. Head voice shows sincerity and empathy. The area in between is middle voice, which most people don’t use. It adds magic, fun and excitement. No one went to see the 3 baritones in concert, they went to see the 3 tenors. The average human attention span is 8 seconds. As a speaker, you have 8 second intervals for the other person to decide if they want another 8 seconds, or if they want to leave you at that moment happily. If you make them feel things, they will remember what you have said.”

On how he got to work with Eminem:

“His manager/lawyer called me up. He said Eminem needed to work on his voice, can you fly out tomorrow. I flew out to New York next day. It turned out Eminem didn’t ask for a voice coach, but his manager/lawyer wanted him to have one. So I had to convince Eminem, on the spot, after flying to New York that he needed one. I taught him that night. Over the next couple of weeks I was on tour with him, showing him exercises. I don’t know if he still practices them. Sometimes I only have to meet someone once, and the way they sound changes forever. The truth is, everyone needs voice lessons, because people are listening.”

On how to get lessons with Roger:

“The best way to work with me is to go online. I have created courses, where in private, people can learn how to speak or sing. Go to rogerlove.com and play around. Do you want to speak better or sing better?” Make a decision and go from there…”

(rogerlove.com/insight will give listeners a $50 gift certificate. It can be redeemed for singing training, speaking training, or both.)

On 3 things that he is grateful for:

“My wife, my daughter and my son.”

Full podcast audio can be found below: