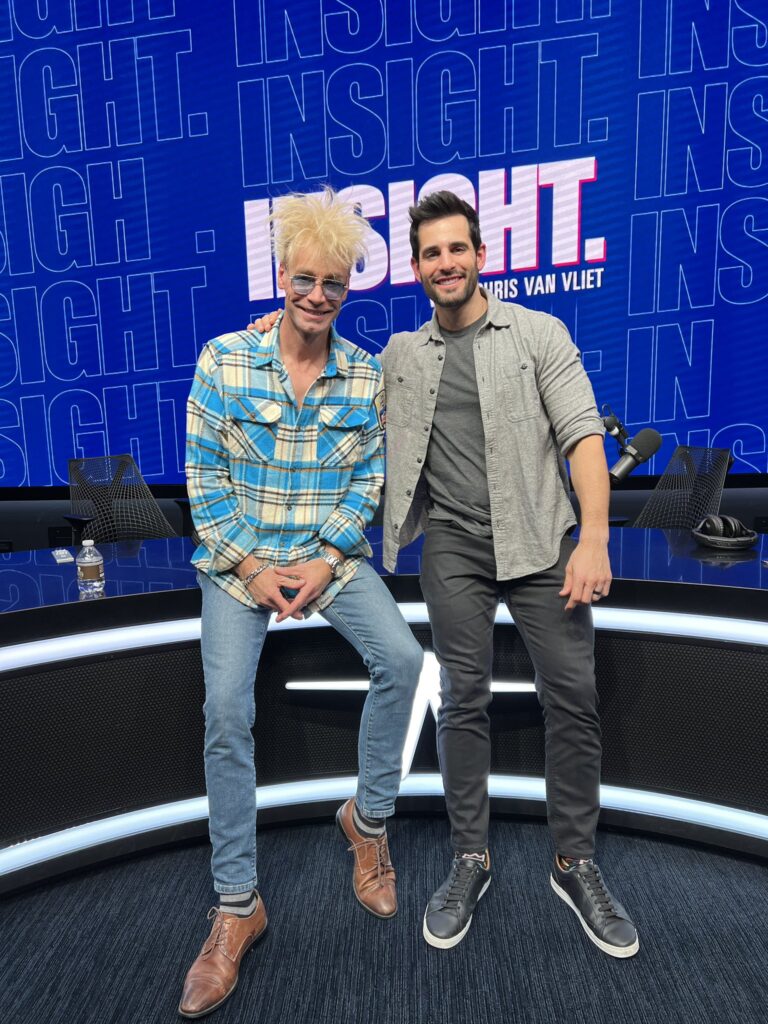 Murray The Magician (@murraysawchuck) is a magician, comedian and actor. He is also a viral sensation with over 4 billion views online and performs live at Tropicana Vegas and Fantasy at the Luxor nightly. He joins Chris Van Vliet at the Blue Wire Studios at Wynn Las Vegas to talk about growing up in Burnaby, BC, how he got started as a magician, falling in love with show business at a young age, the difference between a trick and an illusion, getting to the semi-finals on America’s Got Talent and making a tiger appear on the show, becoming the magic expert on “Pawn Stars” and much more!

On starring on Pawn Stars:

“Yeah, that was a while ago. Yeah, I’m still doing it. And they’re still on the air, which is unbelievable, you know. But it just goes to show you what cool and good TV they put out there. And it’s also a TV show that anyone can watch aged 2 to 102. It doesn’t offend anybody, it’s educational, and it’s even great TV to have in the background.”

On being recognised from many different TV shows:

“That’s exactly what it is like. [They say] ‘You’re from…’ And I’m like yep, and I just keep walking. Usually I’m like, well that’s good enough. For some people it’s like, you know, you’re the guy from and I’m like I am and that’s the end of it. It could be, who knows, I assume they knew who I was. But I think growing up in the business, obviously, I was a magician originally, still am. But as I involved with doing different television shows, I really wanted to create a brand and a look that I could be a host of a show, the neighbour next door on a TV show. I could do a stupid show like Wipeout, which I did or Deal or No Deal, whatever it is, and just kind of be that guy, you know. And almost like, you know, we were talking before we went live, talking about Carrot Top. You don’t need to say what Carrot Top does, he’s just Carrot Top. I mean, so that’s what I was been trying to create all my career. So I can be a historian like on Pawn Stars and talk educated, you know, or I can be on stage and talk ridiculous in my comedy and not be taking that serious.”

On always wanting to be in show business:

“You know, I started in the business when I was five years old Ukrainian dancing because I’m half Ukrainian and I’m half Scottish. And so that’s where Sawchuck comes from, my real name is Murray Sawchuck, Murray is Scottish, so Murray is my mother’s last name. And I got it as my first and of course, Sawchuck is my father’s last name. And so I grew up Ukrainian dancing, and I trained ballet, I played accordion, and I quit all that becasue I wanted a girlfriend. Let’s be honest, accordion is not that sexy. It could have been saxophone, but no. And and then as I got into I got a magic, it was seven, eight years old, like a lot of kids kind of liked it. I was already in front of the audience, liked the attention, only child to begin with, you know, liked attention as well. And then and then it just kind of picked up. I got paid a few bucks for doing some tricks at kids birthday parties. And I thought was kind of cool. You know? So yeah. Did all those shows the Lower Mainland Vancouver, Burnaby. All that.”

On how the magic kit gift was different than other kids who got one:

“I think it was different for me because I think I already had the background of liking entertainment. Like I love watching shows. I love watching even as a kid watching concerts on TV. My father worked two jobs for the railway, which is my whole family was in that CN Rail, and then he also worked as an usher at the PNE, which is the Pacific National Exhibition, our big Coliseum, downtown Vancouver, which it used to be, now it’s not, it’s a smaller one and it’s not used as much. But I got to sneak in and see all the shows because he was the Usher. And so he would sneak me in between the big rock and roll buses from everybody from Cover me Bad to Paula Abdul to George Strait and Willy Nelson… You name a star, he was sneaking in to watch him because I liked it. I’d be 12 I wouldn’t necessarily know who they were, but I liked entertainment. And of course, I became to like them. That’s why I like everybody from Kiss to Alice Cooper to George Strait, you know. So I learned that being an entertainer is pretty cool. You know, you get all the audience, you get the attention, you get to share your talent if you have some, you know. So that’s kind of how I evolved as a kid and growing into it being like, man is cool to do as a living.”

On the difference between a trick and an illusion:

“There is and isn’t at the end of the day. A lot of people growing up in the business when you’re trying to make it and you’re trying to be a star you don’t want to be called a magician, you want to be called an illusionist, becasue that sounds more expensive and rich and high end and whatever the hell you want to call it. I just say I do tricks for a living. I mean, it’s kinda like Frank Sinatra said he was a saloon singer. Because we know he wasn’t, but he was, you know what I’m saying. So now when people ask what I do, I just say I do tricks for living, you know. But yeah, growing up, you know, I’m an illusionist, you know, and usually illusions are magicians that do stuff with bigger items, you know, like, on America’s Got Talent, I vanished a train and a car and a bunch of stuff. And that would be an illusion, because the idea is No, I did not vanish the train. I mean, yeah, I did, if you watch it, I did. Yeah, but I couldn’t just like this. I mean, that’s, you know, but I’m creating this illusion that you really don’t see it there when it might be there, might not be, but it just didn’t vanish in the air, there is a skill to that. So that’s that, whereas the magic trick would be putting a coin in my hand and then it’s not there, which would be sleight of hand as well. But that is more attuned to a magic trick because it’s more self contained. Whereas illusion, Vanishing a car or truck? I can’t just do that on my own. It takes a team of people, lighting and a lot of cool things that make it happen, you know, so maybe that would probably be the, you know, definition of it.”

On Murray’s next level moment:

“Two things I think, you know, it’s funny I get asked that question a lot. It wasn’t that one like Justin Bieber moment, you know where you know, Usher found me or JT. And then from YouTube, and then all of a sudden you’re opening for them and away we go, right? I mean, or Buble with David Foster and then there goes the album and away we go, you know. So I think with mine, it was little successes. You know, one was being on America’s Got Talent, you know. Don’t forget, I was on the fifth season of that. And that was before we were allowed to use social media, no Twitter, no Instagram, anything. Instagram was around at the time, and Facebook. And that was like, Season Five, 2010, so we didn’t have that element. So when it was on TV doing that live, we had 22 million people watch us live. That’s a lot for a live show. Now it’s about 8 million, which is still a lot, but 22 is kind of hard to understand. So literally the next day at the airport, people were walking up to me going oh my god, where’s the tiger? Oh, my God, where’s the tram? I’m like you watched the show? Like, I’m like you actually watched, 22 million? Yeah, they did. You know, because you will run into enough people that did see it because it happened to be the hottest show that year that year. So that, you know, it’s one of those aspects where it’s kind of neat having that.”

On getting a tiger onto AGT:

On last minute problems with the tiger trick:

“The next day after we did the rehearsal, because you shoot the next day, right, five o’clock, which is eight o’clock east coast. At three o’clock, I get a phone call. So if we can’t produce the tiger in the box, what do you think about producing, like David Hasselhoff because David had just left the show? Or maybe Nick Cannon? I’m like, I don’t need a box to produce those people. It’s not a trick like a tiger is. Well, PETA has given us trouble, we’re not sure. I’m like, it’s three o’clock in the afternoon, we go live in two hours. It’s like all this money spent, I’ve rented people. I said are you kidding me? So we go back to well, you know, they’re looking at the tiger and said something about the holes at the top of the cage, we want an air conditioner put in. Like great, so we got an air conditioner put on top that blew the air. Like this is a better than one bedroom part of New York City with a damn tiger. And we did the whole thing what they said and sure enough, they they approved it literally at the last second and we did it but I was like, Okay, I’m done. We’re not doing this again. The animals are always treated well, in my world they are because I’m a huge animal advocate, you know, keeping them safe. And that’s how you get a tiger on there. I’ll never do it again.”

What is Murray the Magician grateful for:

“My wife, my health and giving back to the community.”