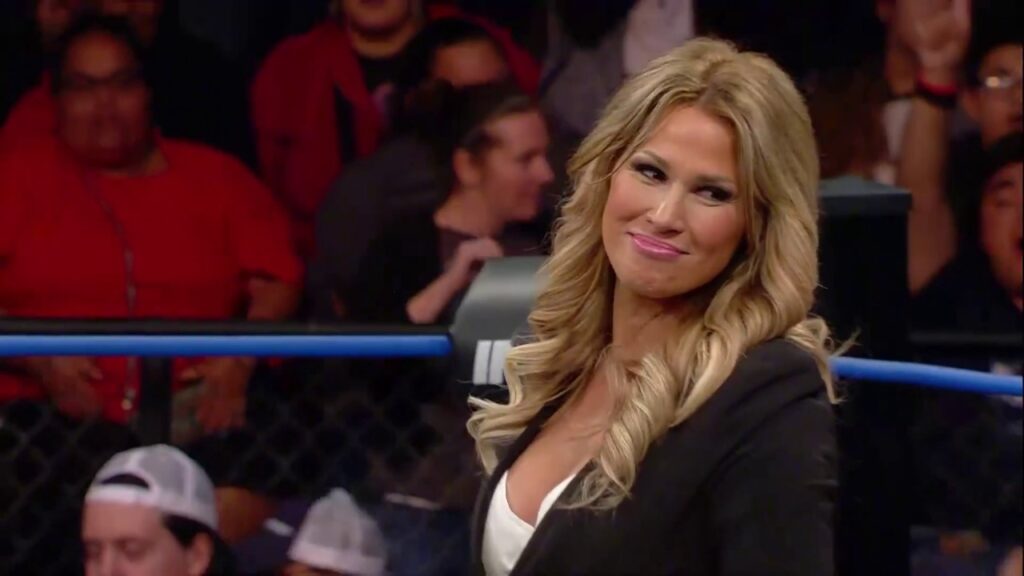 Karen Jarrett (@karenjarrett) is a wrestling personality and the wife of WWE Hall of Famer Jeff Jarrett. She joins Chris Van Vliet to talk about how she got started in the wrestling industry, working as a heel, how Vince Russo convinced her and Jeff Jarrett to use their real life situation with Kurt Angle as a storyline in TNA Wrestling, working a match against Chyna, her thoughts on being involved in Ric Flair’s last match and much more!

“We didn’t really have 5 minutes free all weekend. We were free for a little bit on Friday, but obviously we were stressed out because we couldn’t go to the roast. It was so fun, just the way that everyone bought into it and was on the ride with us, it reminded me of when I was younger. Those storylines where people hated someone, people really hated us!”

On the stiletto spot:

“Jeff came up with it. We had one take and we had to make it good. He [Jeff] wanted to make it look good, and of course Ric wanted blood. Karen wore white, we are doing something with Ric, there is going to be blood. Jeff took it to a whole new level and Ric didn’t have to do anything. If you take a snapshot and zoom in, I can’t watch it. I can watch us walking away, but I can’t watch the beatdown.”

On Karen Jarrett possibly being on WWE TV:

“I don’t know. For about 4 years I had zero desire to do anything wrestling related. I was very happy being a wife, being a mom and being out of the drama. This whole thing, because of the storyline, and it wasn’t just a match, I got sucked so far back in. I hope something comes of it and I want something to come of it, not matter what it is.”

On the term ‘Karen’:

“I have my own shirt saying ‘I am the Karen.’ It doesn’t bother me. It’s better than being Alexa. I think it’s so fun for me, I love going out there and being a heel, I love it when people boo me.”

On first getting involved in wrestling:

“I thought that it was just going to be a short stint. Jeff and Vince Russo had an idea, and then once we got through that storyline, things just kept coming and coming. Then my stay there was cut short, then I came back with blond hair, fake hair, all kinds of stuff. Jeff always says I am a natural, but you are there doing a job. I feel like I always get slack when I speak about it, because I am not a wrestler, but it is a job. I think a lot of the talent take it too serious, I watched those episodes you did with Brad Lea, how can someone so successful be such an asshole? But it is like a movie, there is a villain and a good guy, someone has to be a villain. You are getting a pay check and getting a job, whether you like the storyline or not, it is your role to sell it and become the best that you can for the people that are watching.”

On what made Karen have an onscreen role:

“I don’t know. It was an idea that they came up with at the time, I just thought that it would be a couple of weeks of something and then that would be it. But that didn’t happen, I dove right in! I didn’t realize that I missed it until all of this. Jeff would go and do his thing, he would go to the shows, but I missed it.”

On who helped Karen Jarret be comfortable onscreen:

“Vince Russo, Jeff, and one of the people that helped me the most was Bubba Ray. I would come back from whatever I was doing out in the ring, and he would pull me to one side. Even if I wasn’t wearing the right color, I remember one time I was wearing a lime green skirt, I came back and Bubba said ‘Don’t ever wear that color again.’ Or I had my mouth open for a photoshoot and trying to be hot, he told me ‘Don’t ever do that again.’ But he reminded me where the cameras are, if it was good or bad, what worked… Those 3 people and Bruce Prichard, he was amazing.”

On behind the scenes drama:

“I think because they thought they knew what was going on, but they didn’t. Nobody knew that I had left my previous husband and we had separated twice before, we always kept that under wraps. I don’t think that it’s right to put anybody’s dirty laundry out there if you have kids. Even today, 20 years from now or 40 years from now, I wouldn’t try to defend myself or throw the other side, I don’t think that it is right to do. But I would get upset, but the truth will always come out eventually.”

On Jeff’s reaction to the storylines:

“I don’t know what everyone’s initial reaction was. Even now if something is pitched I am just like whatever Jeff wants us to do. I don’t really know, I am sure that it was shocked and uncomfortable the way that I was. But at the same time, we did the storyline, our kids are backstage and everything is good. Our kids knew that it was not real life and that everything was good. But I am glad that all of that is over.”

On working with Chyna:

“She was really nervous when she showed up that day. I remember her being in her trailer all day, Terry Taylor was working for the company then and kept checking on her. She is one of the sweetest people that I have met in the business. It’s sad, it’s very sad, but I have a great memory that I got to work with her.”

“So that day [Ric Flair’s last match] I said to him, ‘This could be your last match.’ He’s an executive, you know. It could be his last match, I don’t want to walk with him, he looked f*cking amazing, he can’t walk around here with a shirt on. I wanted him to have his moment and then I will walk out. He said ‘No, this is what we are going to do.’ He had me come out first and then had me call him out. Jeff has got this 30 year career, I am this little blip. So I go to Road Dogg and I say ‘OK Jeff wants me to call him out, it gets heat blah blah blah…’ And he’s like ‘I can see his side of things.’ I wanted him to have his moment, I wasn’t happy with what Road Dogg said, so I went to Sonjay [Dutt]. He was like ‘I agree with Jeff.’ You’re all assholes. So we ended up doing it his way and it worked out, but I tired to stay away from him and letting him do his thing. Normally I would be in the ring and taunting everyone and acting like a crazy lady. For me, I want those shots of him in that outfit in our house. People think I am crazy, but it could be his last match. It won’t be though.”

On what makes Jeff a great heel:

“That’s a tough question. He grew up in the business, I don’t think it’s about him, but he walks out there and he wants to entertain the fans. He wants to give them what they want to see and he just has a way of turning it on. He is a maniac, I don’t know [how]. He is brilliant at just walking out there and making something happen. He just has a way of feeling the atmosphere and is really good at pressing those buttons. He can literally just flip the switch and turn it on. He also had some good teachers when he was younger too.”

On what Karen Jarrett is grateful for:

“Jeff’s sobriety, my family and a roof over our heads.”