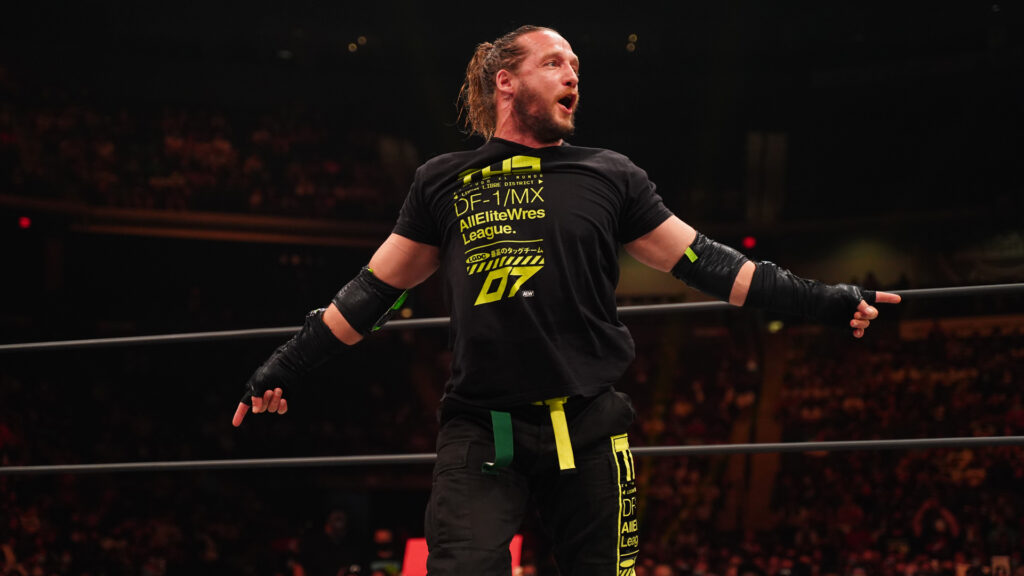 Jack Evans Says He Got “Lazy” In AEW, Understands Why His Contract Wasn’t Renewed, What’s Next For Him

Jack Evans (@jackevans711) is a professional wrestler who has worked for AEW, Lucha Underground, TNA Impact Wrestling, CZW and several other promotions. He joins Chris Van Vliet to talk about AEW not renewing his contract, why he says he got “lazy” and “plump” during his time in AEW, his tag team partner from TH2 Angelico, his favorite matches, the YouTube video series called “How Isn’t Jack Evans Dead”, his AEW Dark match with Kenny Omega, the botches he has had in his career, what’s next for him and much more!

On not having his AEW contract renewed:

“It’s one of those things where I don’t really have any bad experiences or anything. Like I said in a follow-up tweet, I understand where they are coming from. I don’t think that I was actually giving added value to the company, it’s just one of those things. Living on that AEW contract was awesome, but it wasn’t a bitter breakup by any stretch of the imagination, I understood where they were coming from.”

On AEW not firing him:

“I’ve been in darkness, I have been on Dark forever. One thing that I do want to put AEW over for is waiting for the whole contract [instead of saying] ‘We don’t want this guy anymore, dump him next week.’ or whatever. I didn’t want to get involved because those Twitter fights are eternal. But it started this huge Twitter fight and I’m like I don’t really feel like that is the way to handle it.”

On COVID restrictions halting his momentum:

“I feel like for the first year the run actually started out good. We kind of had the place as the semi comedic tag team. Then me and Angelico were at the Mexican border, which got closed because of the COVID restrictions, we had this 4 month layoff. I had this practice match when I came back, and I actually got my face broken again, so there was another 2 month layoff. I feel like after that, I never came back full force, I really feel like I deteriorated. But I can’t blame it on ring rust, I just never had the same momentum, I felt like I was never wrestling good and had just deteriorated in the ring. This sounds weird, but it gave me loads of self confidence problems. Anyone that knows me knows how nervous I am backstage, but when I step through the curtain and into the ring I am all cocky and confident. But I would step through the curtain and would still be as nervous as hell. After the COVID layoff and the face break, I feel like on a personal level I never came back as me in regards to in ring skill.”

“I feel like that salary contract made me a little soft. There was a little while where I got a bit plump and I fell off after that layoff. I only feel like I started to come back after that layoff, but I think at that point the company had already made up its mind or whatever. I did just kind of get, not lazy in the ring, but lazy outside of the ring.”

On Angelico still being employed:

“I think in that first year they were pretty happy with us. We were not the type to go up to the office [with a problem]. I called us the nine to fivers. We would show up, do what we had to do, go to the locker room. There was zero politics and our in ring performance matched up to what they wanted us to do. But I think after that they started looking at me and Angelico differently. I got out of shape and plump, I wasn’t on the ball, but Angelico never fell off. I think it was then that they started seeing us as 2 different entities.”

On if not being stuck in Mexico would have meant more TV time:

“Yes but I don’t think that it would have changed anything. In the end it just came down to me having spent an extended period of laziness. During those 4 months I maybe would have been used more and maybe I would have stayed on the ball more. But I didn’t have that right mentality when I was on a salary, I thought that this will go on forever.”

On what the plan is now:

“I am not a man with the plan. For right now it is the same old same old with the indies. I am looking for a promotion in Mexico, so I am starting to send out resumes. But at my age, it might be time to start thinking about at least semi-retirement. I am at least hoping to get on TV in Mexico.”

“I’m not really an ambitious person. I just want a nice little business that will pay my bills and will provide for my kids. Now I feel like I just want to chill a little bit. There is no need to try and be anything other than the basic necessities paid for. When I first started training, just going to Dragon Gate I was like I’m done. But to travel a lot of places and pay the bills, the indies pay a lot more now but they wouldn’t pay the bills before. I am really content with just how things have been.”

On realizing that he is agile:

“Early on my sister was in gymnastics, so she taught me the back handspring and I took it from there. It really took off when I got into breakdancing, that was when I realized that I have a lot of acrobatic skills.”

On the bumps seen in “How Isn’t Jack Evans Dead”:

“When it comes to that cage of death bump, I agree! On that one, I landed on my tailbone and I was getting Blitzkrieg’s gimmick 2 days later. I had this cracked tailbone and had to do this match against Super Dragon, it was rough. Just to get the Blitzkrieg outfit, that was an honor. But my worst injury was when I broke my leg in front of Chris Benoit, I had plates and screws and everything. In all honesty, most of my injuries haven’t been head injuries, but there for sure [have been concussions]. Nobody back in the early 2000’s was really thinking about that, which is something that AEW does really well. Back then there was a really different mentality. I did a bad 630 on top of a chair in ROH and I did a bad corkscrew and knocked myself out. I am sure there have been more but most of my injuries have been to my knees and my ankles. Now I have to be really careful near curbs, my ankle can lose balance and if I am hanging off slightly I can fall and collapse into the street.”

On living with X-Pac:

“We lived together for a year and a half maybe. I find that with the fans he has a different reputation with the fans as opposed to who he actually is. I used to joke around that he is like the male Mother Teresa, he would help the homeless and give them sandwiches. But then he will do this stupid sh*t, one time he was drinking and he went to an alley and was p*ssing. The police then rush him and he got extorted. I swear to God there is a grey rain cloud that follows him.”

On his AEW highlight:

“For me my AEW highlight might have been that match with the Best Friends. I don’t think I had many classics. Also Iw ould say my singles with Kenny Omega, but man that should have been one of those 6 star classics. But I was so out of shape, I was a neurotic mess putting that match together. I was so blown up and it could have been a big break, but it should have been so much more. We cut so much out and so much was not executed properly, but that was again 100% my fault. He just out worked me where we had to end the match early because I was done. That really should have been a classic, it came off good but that one hurts me.”

“Wrestling in general, the family and being in Mexico.”