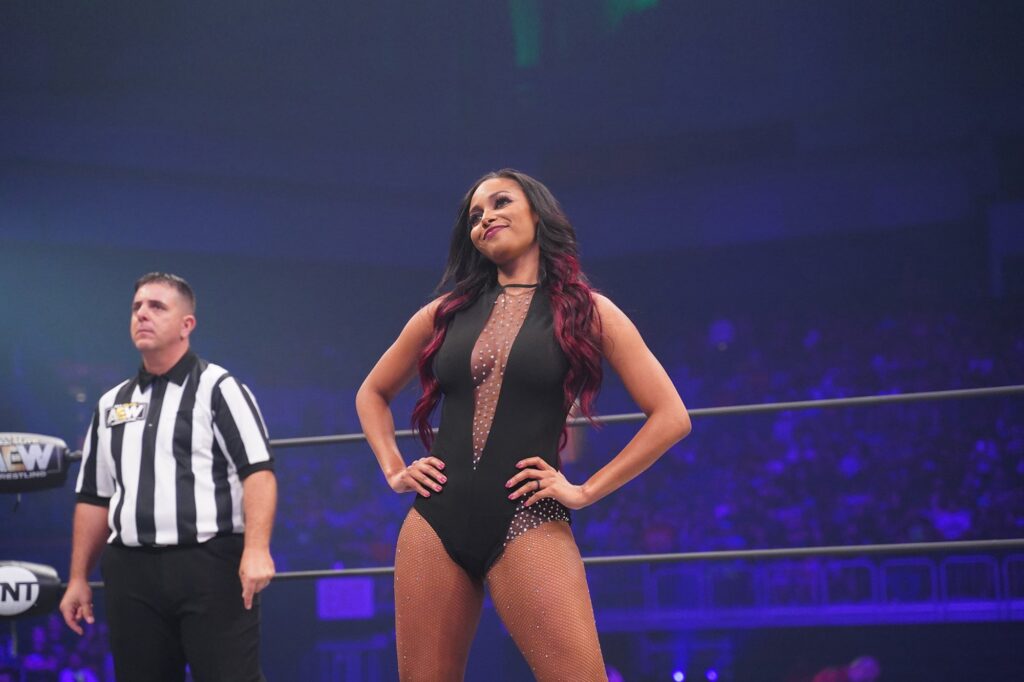 Brandi is a professional wrestler, television personality and the Chief Branding Officer of All Elite Wrestling (AEW). She joins Chris Van Vliet to talk about the birth of her daughter Liberty, the meaning behind the name, how different Cody is now that he’s a father, her journey into wrestling and the WWE, becoming a ring announcer, her reaction to Cody’s neck tattoo, what the future has in store for AEW, her reality show “Rhodes To The Top” and much more!

On having a daughter and how it changes things:

“It completely throws off my mojo of winging it, that doesn’t really work anymore. I was a pro at winging it. If you told me ‘Brandi, you’ve got an interview tomorrow at 6 o’clock.’ It’s embedded in my brain and it’s there. Now, Mandy is almost always at 6:05 is saying ‘Where are you?’ I’m thinking where am I supposed to be? Then oh my gosh! But yeah, I definitely have mom brain and I fully embrace it, and I am trying to get far more organized.”

On mom brain being real:

“Yes, absolutely. I was shocked as to how quickly it all kind of floats out the window. The only things that seem to stick are the things that are involved with the baby, like her appointments. Somehow I always seem to find time to shop for her, online shopping for baby clothes is my forte at the moment. But all of her stuff seems to make it, my stuff not so much.”

Is dad brain a thing?

“Oh Cody had dad brain before, it’s worse. He is really trying to find his balance. But the good thing is we are kind of surrounded by people who are empowering us and helping us, that has gone a long way. Otherwise I think we would both be floating out to sea on a raft, waiting for someone to come and help us.”

On being followed around by cameras for Rhodes To The Top:

“So they followed me from about 7 months [into the pregnancy], all the way up to the end and the beginning of the new baby. The hardest part of it was being that pregnant and having constant eyes on me and constant requests while trying to keep a good face. It bombed considerably, as noted in the episode where I had the meltdown about the bus and the bed not being on there. They were very kind to me in that moment. It was so much worse, I went out the world backwards. I don’t know how Cody missed that piece, but it’s no secret I hate The Nightmare Express.”

“To me, it’s a waste of money and a waste of time. I can take a flight and it is so much faster, or I can drive. But it’s a bus, it takes longer, I’ve never been a fan. So then being pregnant, totally not a fan. It’s uncomfortable, I’m like how do I sit? The only place to be comfortable was to lay down in the back. Also there is the nausea. I had terrible nausea for my entire pregnancy. Rolling around in the back of the bus was rough. That moment, when I realized that there was no bed on the bus, the meltdown was substantial. I did throw something, they didn’t show that. I knew what I was doing, but I did not care about the cameras in that moment. So I was so angry, but they let me look ok. I hope they do a scenes that didn’t make it though. There were some funny scenes with the guys that didn’t make it and some meltdowns with me. There’s also me going into labour on camera. I’m not sure how much is shown, but it’s pretty great.”

“Me and wrestling found each other in the weirdest of ways. I was one of the last Divas. I was in Miami and I was scouted as a model. So I was modelling and I was attending the University of Miami at the time. My agent called me and said ‘Hey, would you ever be interested in professional wrestling?’ I’m like where is this coming from? They said that they saw my pictures and they are interested in athletic models. I had figure skated for 17 years, so that made sense at the time. If any unique opportunity comes my way, it peaks my interest. I was a fan of wrestling as a child, so I’m like well let’s see what the training is like. I did a week of training, fell in love with it and I have ever since.”

What she is most proud of in AEW:

“I would have to say that it is a testament to everything that we have created. We have this phenomenal staff and phenomenal roster, all the way up to CM Punk. It is a testament to what we have built. It’s very exciting and it’s really amazing to see that. This is what we thought was possible, but now we are seeing ourselves come full circle. We are seeing people who we thought would thrive in this space actually thriving in this space. It’s just really rewarding. Even on the roughest or toughest of days, if things are not going great, I can look back and say I am a part of this.”

On what is the reason why AEW is so successful:

“I think that it was always just the perfect storm. You need the perfect storm of talent and behind the scenes folks that had the work ethic to make this all happen. It all came together at the same time. Tony [Khan’s] interest happening at the same time as everyone becoming free agents, all of that had to happen for it to work as well as it did today. People will always say ‘You wouldn’t have had AEW without this person.’ In reality, you wouldn’t have had AEW without all of the people and all of the wheels. That could be the people you see out front all the time, or just the people you don’t see, because they are not a character. Without all of that happening, I don’t think we would be where we are today.”

“Dusty was always ‘Be straightforward’ as far as I was concerned. We would talk about wrestling and different aspects of it, he would say ‘Tell me straight, what do you want to do? What is the plan? What do you see?’ I would say to him what I would see and that this is my perfect plan. He would then say ‘Ok, you have to say that. You have to tell people this is what you want, because no one knows this. Even though you feel like you are making it obvious, it’s not. You have to tell people what you want and you have to show them.’ That is what has stuck with me and is something I have thought about in my transition of going from ring announcing at this comfortable job, to moving to the unknown. It wasn’t ultimately what I wanted to do. Mine and Cody’s move happened soon after we lost Dusty, I think a lot of his advice rang true to us of you only live once.”

On the meaning behind her daughter’s name, Liberty:

“I’m so glad that people are starting to ask about this! I feel like people think the reason is because of everything to do with Cody being a patriotic dude. That’s really cool, I love it, but I wouldn’t name my daughter Liberty for that reason. It’s because of Disney, we are both huge Disney fans. Before we found out that we were pregnant, we were at Disney and just walking around whimsically. We were just talking about kids and what would their names be. I said we definitely need to have a Disney connection, but it can’t be on the nose like Elsa. I can do better than that. So we were just walking around and talking, throwing things out there. Then we walked into Liberty Square in Magic Kingdom. I saw the sign and said ‘What about Liberty?’ Cody said ‘I love that!’ Cut to a year later and we are pregnant, and we knew that Liberty was going to be the name.”

“I know a lot of people who have a lot of tattoos, so it’s not shocking to me that he would want a tattoo. And I have a lot of tattoos, but mine are smaller. I just thought that, and it’s just me, but it should go into more. Maybe we do a whole sleeve or chest thing. But he just wanted that one thing. I’m like, I just think it looks a little lost. But now I have grown into it and I barely noticed it. I never thought it looked terrible. Tattoos are expressions of you and what you love. Do what you like, it’s your body, who cares?”

“My family, God and every day I wake up.”