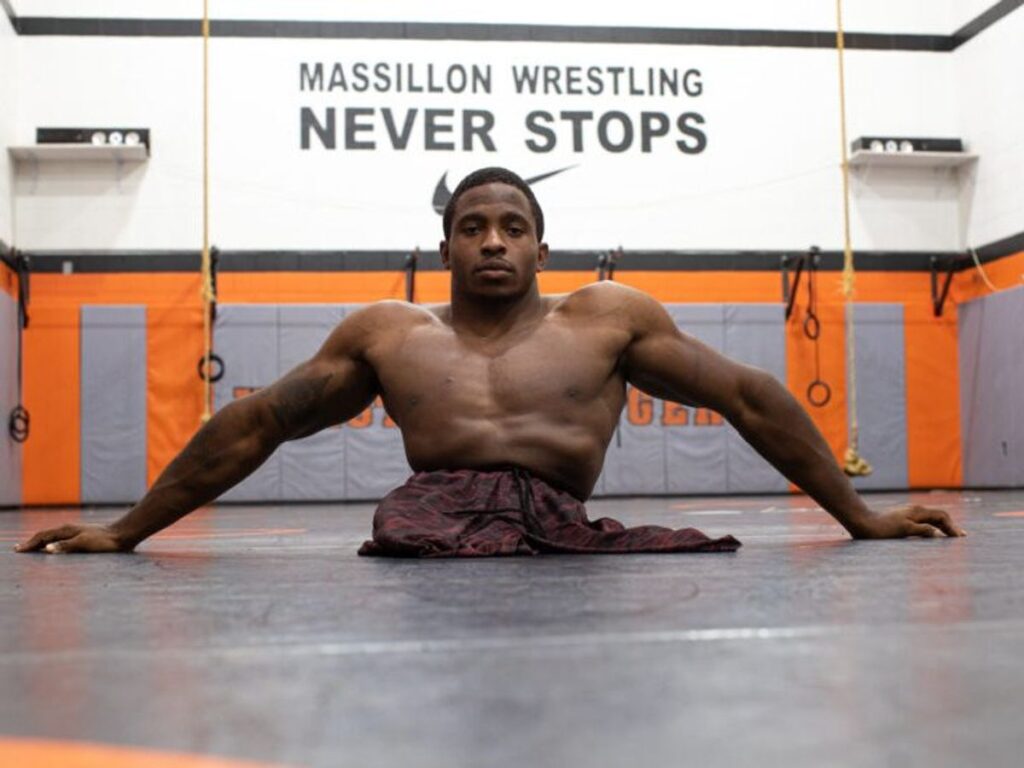 Zion Clark – The Inspiring Story of the Wrestler Born Without Legs

Zion Clark is an amateur wrestler and track star born without legs due to a condition called Caudal Regression Syndrome. He joins Chris Van Vliet for an in-person interview in Los Angeles to share his amazing story of overcoming every obstacle that has been put in front of him including being placed in several different foster homes for the first 17 years of his life. He is now chasing his dream to become a Olympian and also a professional MMA fighter. Make sure to check out the documentary short about his life on Netflix called “Zion” and his new book is called “Unmatched”.

“It’s called Caudal Regression Syndrome, it’s a very rare disease. Me personally, I’ve only ever met one other person in my life with the same condition, which is crazy. With a lot of disabilities you can find a lot of people with those disabilities, not mine. Mine is so rare that it is like 1 out of every couple of hundred thousand are born with it each year. That being said, me growing up the way I did and just being me was very different. You are lower to the ground. As a child I was only about 2 feet tall.”

On how Caudal Regression Syndrome affects the body:

“I’ve seen the birth records 2 or 3 times. I think it was like 3 lbs. Very very small. But just becasue you have Caudal Regression Syndrome, it doesn’t mean that you won’t have legs. It might mean that you have a spinal issue. It’s mainly a spinal issue and how it affects the rest of your body. Your nervous system goes through your spine and goes out through your entire body. If those signals are not being sent right, it can come out in birth defects. In my case, I wasn’t born with legs and I am missing the lower portion of my spine. That’s what I had to deal with. I met a lady in my first track meet that was missing the same part of my spine plus another 4 inches. She didn’t have legs, but had a harder time moving around becasue the condition was a lot more severe than mine.”

On his mother’s pregnancy:

“Yeah my birth mother, she was a drug addict and in and out of jail constantly. When I was born, I had pretty much every party drug in my system that you can think of. Most kids don’t survive after that first day, especially if the mother is marinating their unborn child in such drugs.”

On his birth parents:

“I actually don’t know who my father is, but my birth mother [I have met]. It was after high school, I had trained for my first season of track and field and came out with 2 state titles. I remember being the third person in my school’s history to become a 2 time champion. There’s billboards all around the city, newspapers, magazines. I am up there with the guys who make history. I’m on the bus and this lady gets on the bus and she walks in with 1 leg and sits down next to me. I’m thinking nothing of it I’m just minding my own business. She looked at me and she said ‘Zion.’ I looked at her and said ‘How do you know my name?’ She said my full name that I was given at birth. The only people who knew that were my adopted mom, me and my case worker. When she said that, I was like who are you? She said ‘My name is Melanie and I am your mother.’ I was in shock. I was 18 at the time. I didn’t know what to say. She was like ‘I missed you, I’ve been looking for you.’ Well yeah I’ve been on ESPN. When she said I’ve been looking for you for years, that rubbed me the wrong way.”

On having a rough childhood:

“I definitely felt unwanted growing up. A lot of the families I was with, they didn’t know how to raise me or they didn’t know how to care for me, becasue I was different. I had to wear these prosthetics. They looked like regular legs and I had to sit in this brace. I would get sent to school with it. The early stages of my life, wearing the prosthetics, they were to straighten my spine out. Once I got to middle school, I am 12 or 13, I started to realize I am moving around just fine, why do I have to wear these? I am wearing them for 18 out of the 24 hours in a day. It got to the point where it was a punishment. I was like I am my own person. If something broke on the prosthetics, the nurse would call and I would get punished at home. Over the top punishment for something that could happen to anyone. If I was a parent and had a kid like me, once their body was repaired I would let them make the choice. They don’t need to look like everyone else.”

On there being a happy ending:

“The dark beginning is what lifts people up and inspires people. A lot of people who go through similar things, they don’t have the same mindset. Even today, people that go through what I go through don’t make it out. They don’t all see the brighter side of things and put the past in the past. Some hold on to it and it brings them back to jail or onto the streets. It sucks so much that the world is like that. Me being who I am today, I am strong the way I am, move like a boss. I am a survivalist and I will survive. Unless you are born into a family that is struggling, life is not as hard as the rest of the world. You can’t put someone like me with someone who has had everything and expect us to be friends.”

On nearly missing out on adoption and praise for his adopted mother:

“I got adopted at 17. I was almost too late. If I would have waited 7 months, it would have been too late. It changed my life. I had been adopted 2 times before. They say it’s your forever family, but they still get rid of you. One of the last families I was with got rid of me on the day I should have been adopted. A lot of kids go through what I have been through and they struggle a lot. I have had my family support me and we live by example. If I got in trouble with the law, my foster mom just sat me down and spoke to me. I have never had that before. With my mom doing parenting the way that she did, if she didn’t do that I wouldn’t be here. There is no success, no wrestling, no track.”

On how he travels around the country:

“I walk on my hands, I have a wheelchair and I can drive, I drove here. I have hand controls. The thumb is the gas, there’s a lever for the break and just steer with the wheel. I remember going in there and they are like ‘Sir do you have your own vehicle?’ I did then they asked how was I driving. Is it OK with my doctor? I finally take the test, ace it and I’m like, bye!”

On his future goals:

“Track and field world champ, Olympic Champ, wrestling world champ. We are talking 2024 here. Also MMA, if we can figure out a way for me to get into Bellator, I want to be world champ.”

What he is grateful for:

“I have a family to call my own, the people in my life that have helped me propel myself and I am here to inspire people.”