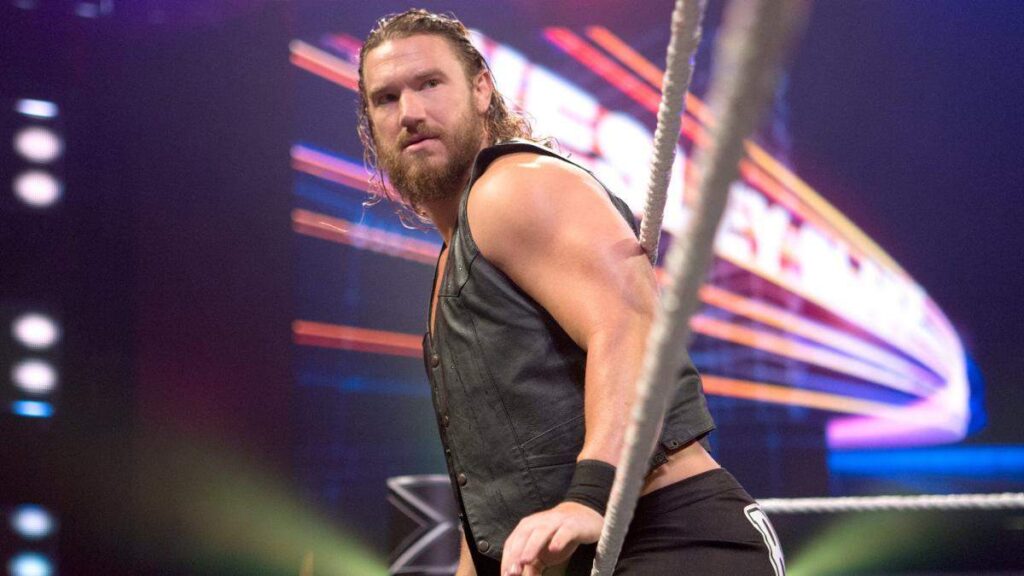 Wesley Blake (Westin Blake) is a professional wrestler known for his time in NXT and WWE. He joins Chris Van Vliet from his home in Orlando, FL to talk about his recent release from WWE, what he plans to do next, his time in “The Forgotten Sons” faction with Steve Maclin and Jaxson Ryker, his reaction to Jaxson Ryker’s tweets that derailed the momentum of The Forgotten Sons, his love of pro wrestling and football as a kid, his wife “Tough Enough” winner Sara Lee, how becoming a father changed him and much more!

On how being a father has changed him:

“I wouldn’t say it has changed my career path, it changes your focus. From our first daughter that we had four years ago, I still remember that day when Sarah told me that she was pregnant. We were at NXT at it was right before [TakeOver] Brooklyn 2. I had a match with Shawn Spears. That was an interesting day, when I got to the building, I didn’t know who my opponent was going to be. They were like hey you’re going to wrestle on the pre-tape before TakeOver. I think they were trying to figure out a thing with Kota Ibushi at that time. So I just sat there for hours waiting, I think it was Adam Pearce who kept coming up to me and saying ‘We don’t know who your opponent is going to be yet.’ It wasn’t until about an hour and a half before doors when I finally got told ‘Hey, you’re going to be wrestling Shawn Spears.’ I was like great. Then I get a phone call from Sarah. She said ‘Hey can I talk to you? Are you around anyone?’ I walked away and that was when she told me that I was going to be a father for the first time. With that sentence alone she made me the happiest man in the world. Two things I have always wanted to do is wrestle and be a father. When That happened I was overwhelmed. I felt bad though because she was in Orlando, I felt like I should have been there when she found out she was pregnant. When I got that news it switched my focus. I’ve always prided myself on work, trying to put the best product I can out there for myself. But that night I was driven. I wanted to steal the show and I want to show everyone what Wesley Blake was all about. I couldn’t have done it without Shawn he is excellent. That match will always be near and dear to my heart.”

On his new wrestling name:

“I’m going by Westin Blake. When I was in NXT the first time, I pitched a bunch on names. I was always told it’s best if you can have a name that you can connect with. I have an older brother named Blake, so that was a big driving factor. Most of my life I have been called Weston, because that’s my last name. When I gave them the list of NXT names, Wesley Blake was the winner. They had 3 or 4 on there, I can’t remember them but they were not that good.”

On what he learned from Dory Funk Jr:

“Every match he told me that you are going to learn something new, no matter if you are wrestling a guy for the 50th time or the very first time. With his foundations he was able to help evolve when the business was evolving. He has been around from the 70’s and still training athletes to this day. Someone like that to be like it’s always going to be evolving, wrestle how you want to wrestle. You never stop learning in that aspect of wrestling. Every opponent you learn something.”

On his times in WWE:

“Looking back I have nothing but great memories there. I felt like I was able to evolve with NXT as well from when I started in 2013 to where it is now. Winning the NXT Tag Titles with Buddy Murphy was one of the highlights. Getting with Steve [Cutler] and pitching The Forgotten Sons, that was another proud moment where we gave them something as an idea and they ran with it. Meeting my wife there and getting to start a life with her. Getting to travel and wrestle in places that I never thought I would be able to travel to. I got to wrestle in Paris in a circus tent, little stuff like that. Of course all of the friendships you get to make.”

On different names for The Forgotten Sons:

“When we first pitched the name we wanted to use Prisoners of Society or Prisoners of the System. We wanted to be these 2 guys who felt like we did everything right in life, but nothing was given to us. So we were going to take it by any means necessary. We pitched that but they didn’t like the Prisoners of the System. They thought that the name would bring NXT in a bad light. We then started pitching other names and The Forgotten Sons is what stuck. We were happy that they liked it so well.”

On how Jackson Ryker halted their momentum:

“The whole situation got halted. When we got called up we were told that we were going to be feuding with The New Day. It looked like we were going to be with them for the foreseeable future. Xavier Woods was out at that time, and I believe they had plans once he was ready to come back. They were going to have us do 6 mans, integrate with each other, stuff like that. Then that tweet happened. Steve and myself, we asked [Jackson] Ryker if he would take it down, but as a man of his own, he respectfully said no. So Steve and I told him ‘Well listen, we are going to separate ourselves from you with our own opinions.’ So we did. When Steve and I went to creative the next day at the Performance Center, we talked with some creative and we were told that we were going to let this blow over for about 2 o0r 3 weeks, then we will bring you back and you will still feud with The New Day. Then it was about a week later where we got a text saying ‘Nope, New Day is going with Shinsuke and Cesaro.'”

On how he handled the situation:

“When something like that happens, it’s something that you can’t weigh on. You can’t sit there and gripe about it. I did what I felt was right and what I felt was needed to help move on. After that Ryker has called me and has apologized. He never meant for that to hurt our careers or to dismember The Forgotten Sons. He is very apologetic towards me and Steve. That was one thing that I told Steve and I told Ryker ‘Now we have to move forward. I can’t sit here and keep blaming this or that.’ I’m going to try and make the best of a situation. Me and Steve started pitching ideas to get us onto TV again. Fortunately they did this thing where they paired us with Baron Corbin.”

On his plans for the future:

“I’m looking ahead to tell my story and to wrestle how I want to. When you are with WWE, you get to wrestle people from different backgrounds and cultures. But now I get to wrestle in front of different crowds. They won’t be WWE crowds, they will be more hardcore fans. It’s going to be exciting to work with guys across the globe. Hopefully get my story out there and get my craftsmanship up to a level that I would like. July 15th is the last day of my 90 days.”

“That’s always tough for me, there’s so many talented people out there. You have AEW, who has a great, talented roster. But then you have IMPACT, ROH, MLW, New Japan, NOAH, all these stacked rosters with all sorts of experiences. It makes me giddy wanting to wrestle these rosters.”

On how he met his wife Sara Lee [Tough Enough winner]:

“We met at the Performance Center. When Tough Enough was coming out I used to go to a friends apartment and we used to watch it. I will never forget when they announced the 11 Tough Enough people. When Sarah came across the screen, I said to the guys ‘I don’t know what it is, but I think she is the most beautiful woman I have ever laid my eyes on.’ It was crazy, this was before the show was even a thing. Just by fate, she ends up winning it. I was super proud of her. When you are that beautiful inside and out, it shows through the camera. I think that was what helped her win. We started talking on the NXT Combine. We were doing some weight room testing. We did the rower and I did so much where I threw up. I was in the weight room, head over a trash can as the girls were about to start, great first impression [laughs]. She was so sweet that later on that night she massed me on Twitter saying ‘Hey I hope you feel better.’ And from there it just took off.”

“My wife and kids, the friendships I have had and the life lessons I have learned in WWE.”