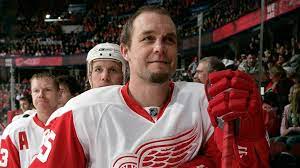 Darren McCarty is a retired NHL player, broadcaster and 4-time Stanley Cup Champion known best for his time the Detroit Red Wings. He talks about his role as an enforcer on the ice, his most memorable fights, being part of the “grind line”. his love for professional wrestling, how he went from the minor leagues to the NHL, life after his professional hockey career, his battle with addiction and much more!

On when he wanted to be a hockey player:

“To be completely honest, I was the kid that since 8 years old this was what I wanted to do. You told me ‘how do I get here?’ I say ‘You have to do this.’ Even if it’s breaking through a cement wall I will do it! I didn’t get drafted until I was 19 years old. Back in 1992, you didn’t go until the later rounds and you were a late bloomer. I grew up a Wings fan and they sucked in the 80’s. Also with my style, with Bob Probert, I knew he needed a Robin to his Batman. I don’t need to be the lead guy, I can be the meek. And the meek will inherit the earth. You give me a role and I will give you everything that I got. I need to know the why, not the right or wrong. If I know the why, I can correct it. It wasn’t my love of being physical or fighting, it was my love of my team mates and not doing it first.”

On how attributes have changed for players:

“With sports now it is more regulated. We understand that there is concussions and there are different rules. But the whole thing is that the game has changed. Like with wrestling, the 205 Live, there is a spot for everyone. The transition from my NHL where size would you get you anywhere. But now it’s speed, there is more opportunity now. When I grew up, if you were a big kid you would get more of a chance.”

On his NHL persona D-Mac:

“I always knew who D-Mac was. D-Mac is my wrestling persona, he is the guy. Darren McCarty didn’t understand who he was. I always knew how much the love and appreciation of your brothers you would get back. It doesn’t matter who it was, they knew I had their back. that is what wins you championships. My role was the enforcer, until I decide it’s not anymore. The game started changing and the priorities started changing. Hockey is what I did it’s not who I am.”

On why he loves hockey and the fights:

“We do what we do because the chicks dig scars. Off the ice I’m a lover not a fighter bro. You get some sympathy from that. I came from Ontario, I grew up with guys who worked in the fields and family businesses. If I didn’t take the opportunity, the I am doing a disservice to the boys. A lot of the stuff I got myself into I knew it wouldn’t end well, but that’s the way it is. You have to be accountable for what you do. I never wanted to miss that moment. You never know if it’s going to be taken away. I know how things will end now and I’ve been there and done that.”

On people trying to fight him and his love of wrestling:

“I tell everyone you get 3 shots. It’s either kill me, knock me down or it’s my turn. It makes people think when they pull back the swing, you will never get the shot in. With who I surround myself with, there never is any trouble because they have my back. I just turned 49, the priorities are different than what they were when you are younger. I tell people my favourite sport is wrestling, because it’s scripted. I’m a storyline guy, I don’t have to like it but it has to make sense. The forbidden door, I love that! When they have control, it gets them interested. It’s the love and the passion to what you want. I have regained my love bigger than it was when I was a kid. Now I have friends in the business, I go around the independents. I want to see the kids succeed. I can’t physically help people on the ice but I can tell people mentally.”

On being a fan during the Attitude Era in WWE:

“Yeah man suck it! The Road Dogg was my dude man! The wrestling is a dance, it’s such a brilliant script. With technology and social media, you feel like you know the real people. There is a place for kayfabe though. Some Cold was my guy growing up. I would stun people in the locker room. Mathieu Dandenault was The Rock, he could do the eyebrow really well. We made Mike Knuble be Mankind because we would always beat him up. We loved it. Being at the Joe Louis too, I got into it with D’Lo Brown and Hardcore Holly.”

On winning The Stanley Cup:

“There’s a superstition that you can never touch the cup unless you have won it if you were playing. How heavy is this thing? You hear that it 35lbs but it’s as light as a feather. I’ve been fortunate to do it 4 times. Each one is like a kid, I don’t have a favourite. Each story to get here is a lot different.”

On training to be a better fighter:

“Yeah I boxed every summer for about 10 years with a guy called Al Irish. I did that for conditioning. If you want to get in the best shape of your life do some rounds of that. I also did some MMA stuff because I like that sh*t. I’m not the biggest guy so I need to be able to fight these bigger guys. It wasn’t that I wanted to learn, it was more getting into shape. I sometimes had 2 minute rounds on the ice. I will fall over skating in a straight line but in a hockey fight I’m like a ballerina.”

On stepping away from the ice:

“For me it wasn’t difficult. For me, I checked out in 2004 when I decided to do my band Grinder. Hockey at that point was a business. I wasn’t happy in my life, I was going through a divorce and other stuff. So I was coming out of my 4th rehab and trying to be around my kids. I was having lunch with my friend and I was like I think I’ve got something left. When I said I was just looking for a chance, I had to make sure I was sober. I got a 2 week try-out in Grand Rapids and I scored a hat trick. In the end, they needed me more in the dressing room, because those were my guys. I got hurt again and I was done, I had proven it to myself. I was supposed to ride into the sunset but that didn’t happen. Also I was struggling with alcohol, over 300lbs and had high blood pressure. I got clean and realized why I was kept alive. It was for this plant cannabis. 11/11/2015 was the last time I took a drink or a pill. In Michigan, cannabis is legal and I have created my own CBD. I am never high, I am medicated. Instead of passing out from booze, you have a plant that can work with your system.”

On struggling with alcohol:

“In my life there is no rock bottom, there is just an endless pit. The truth is, as an alcoholic no matter how much time you have away from alcohol, if you go back you are right back at the start. I have abused my body if I drink now I will be dead. Now I am in better shape than when I was playing. It wasn’t until I had that physical relief. With alcohol I would die. I’ve had so many different things you wish you wouldn’t have done. But you did them, I did it, I will own up to it.”

On now being sober:

“When you are an alcoholic it’s the lifestyle and the pain relief. I went years and years not drinking when we were in the playoffs. But I knew there was always a date. Now there is no date. Also I couldn’t get to sleep. I’m not a machine but alcohol can help switch the brain off.”

On what hockey has taught him:

“Never give up. Never get up off the ice. You can stay down, but when you are ready to get up, then get up. As long as you don’t quit, you are still in the game. And you are not alone. There is somebody out there that is connected with you. It’s the get knocked down and get back up. Through injuries and everything else. The biggest thing is to get outside of yourself. If you are having a tough day, go and do something for somebody.”

“My best friend who is also my wife, the health of all my kids and people around me.”