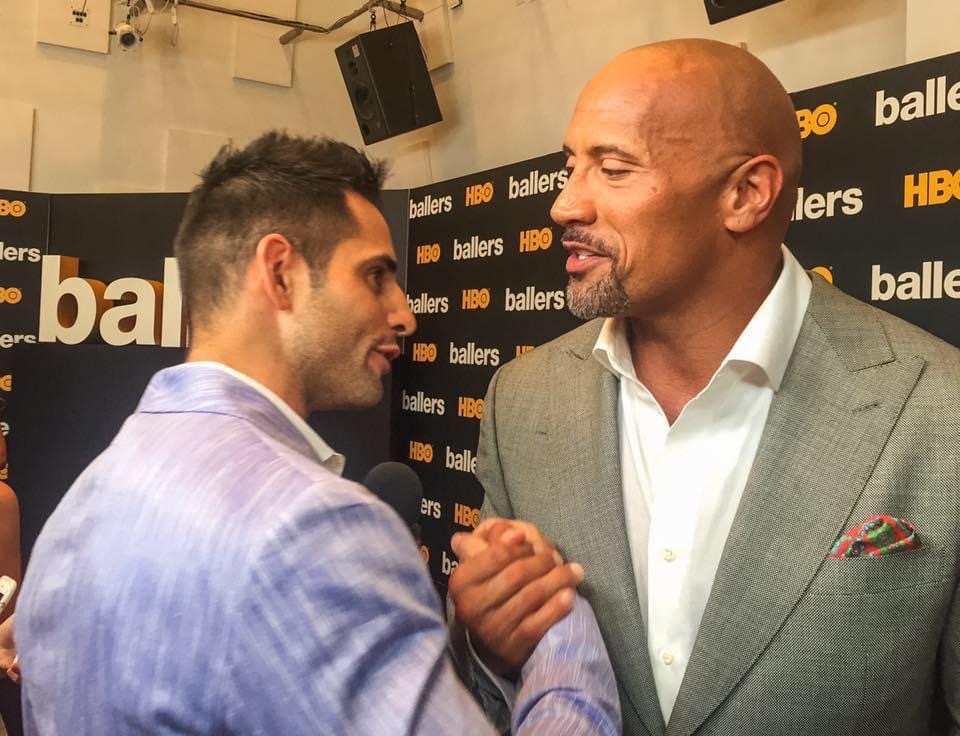 5 Things I learned from The Rock

So I became a wrestling fan, like a lot of people during the Attitude Era. I started watching religiously in 1998 when I was 15. It was the Austin and McMahon feud that really drew me in and once I was in, I became a massive fan of The Rock. I mean, how could you not? In fact, I tell this story all the time but I used to walk down the halls at my high school asking people questions just so I could shout “It doesn’t matter what you think!!!!”

In college, I even dressed up as The Rock for Halloween one year.
So when I started worked in TV and a few years began to interview celebrities, The Rock was at the very top of my list of people who I wanted to interview. He was THE bucket list interview for me. And 7 years into my career… I had my first interview with The Rock. March of 2012. It’s on my YouTube channel if you want to check it out.

So I joke all the time, that I’ve interviewed The Rock 9 times. Not that I’m counting or anything. And I truly don’t say that to try to impress you… I say that to impress upon you that there are quite a few things that I’ve learned from Dwayne Johnson. Now these aren’t things that he’s specifically TAUGHT me, these are things I’ve picked up from talking to him and from watching the way he interacts with everybody around him.
These are the lessons that LIVES in his daily life. And if you follow him on Instagram, I’m sure you’ve noticed some of these too.
So here we go… here are the 5 things I’ve learned from interviewing The Rock!

The Rock often recites the famous quote from renowned investor and philanthropist John Templeton that says “It’s nice to be important. But it’s important to be nice.”

And I feel like that is at the heart of who The Rock is.

Even though he is one of the busiest guys in Hollywood, if not THE busiest guy, he is incredibly present when you speak to him. He looks you right in the eyes and genuinely listens to what you’re saying. He could be thinking about the next movie that’s starring in and also producing…. or one of the companies he’s running like Teremana or Zoa. Or about his wife or three kids. But no. He is firmly planted in that moment and in that conversation with you.

Being as big as The Rock is, he obviously has a massive presence wherever he goes. And yes, he is just as big in person as he looks in movies or in photos. But he takes it one step further and owns whatever space he walks into. He doesn’t own it in a “HEY LOOK AT ME, I’M THE ROCK AND I’M HERE!” kind of way. Which is something that some celebrities do. He owns it with a beaming smile, a warmness in the way that he interacts with everyone. And it’s just very clear that he is in the position he’s in because of the way that he treats everyone he comes into contact with.

Number 4 – Don’t take yourself or life too seriously.

It’s ok to laugh… especially at yourself sometimes. The Rock has one of those big, booming, contagious laughs. But he’s also comfortable enough in his own skin that he’s not afraid to be the butt of the joke.

We’re not here for very long, we might as well enjoy our time.

And finally number 5 — which I think is the most important one. Self Awareness.

If we all had a little more self awareness, the world would be a better place as a whole. The Rock is a massive star. You could argue that he’s THE BIGGEST star in the world right now. And they always say that you shouldn’t meet your heroes, but if your hero happens to be Dwayne Johnson you should absolutely, 100% try to meet him.

Because when you meet him, he is self aware enough to know that this is a big moment for you. He turns the moment around and makes YOU feel like star –and totally make it a memorable moment. He’ll do things like play along with your jokes or he’ll even crack a joke at your expense. It’s the same trait you see in wildly successful people like Oprah or Will Smith.

So there you go. That’s the 5 things I’ve learned from interviewing The Rock. Take a few of these and apply them to your own life.