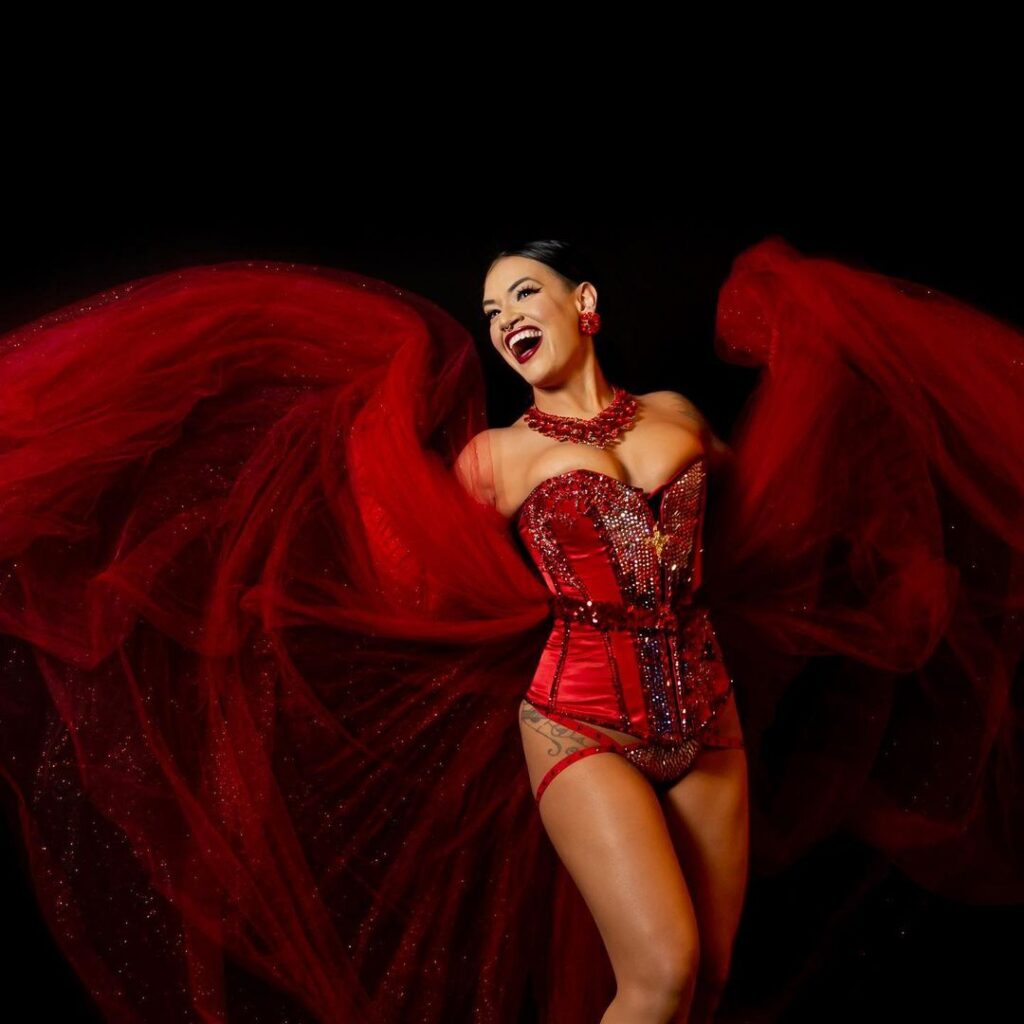 Shaul Guerrero is a pro wrestler, ring announcer, and burlesque dancer. She is also the daughter of the legendary Eddie Guerrero and Vickie Guerrero. She joins Chris Van Vliet from her home in Chicago to talk about growing up as Eddie’s daughter, how she dealt with her father’s death, her career as a pro wrestler, why WWE made her use the name Raquel Diaz, how she met her husband and former WWE superstar Aiden English, her career as a burlesque dancer, working for AEW as a special guest ring announcer and much more!

On wrestling being similar to burlesque:

“Absolutely. I have worked with a burlesque mentor in Chicago. When we were talking, it was all about storytelling and spoon feeding the audience exactly what you want them to know. Less is more too. The similarities between wrestling and burlesque are very similar. I talked to my husband [Matt Rehwoldt/Aiden English] about burlesque and he was like oh so it’s like wrestling. Basically yeah but it’s way more sparkly and you happen to be telling a story as you are taking your clothes off.”

On how she got started in the Burlesque world:

“So it’s no secret that I have had an eating disorder and whatnot, I have come out publicly about it. Honestly the ultimate epitome of recovery in my mind is to put my body on full display. It’s something I love to do, I have been a dancer ever since I was a child. Merging those two worlds seemed like something challenging to do. I did my first act as Austin Powers, I had the whole hairy chest thing. I did a dance in tighty whiteys and morphed into a whole fem-bot. I was hooked.”

On still battling with body image:

“There are still some days that I am struggling with my mental health. Sometimes the last thing I want to do is get on stage naked and do this thing. At the end of the day, I always have the best time and it’s always so empowering. I love that burlesque is getting better at highlighting more bodies. If you go to a show, you’ll see every body type along with everyone’s creativity and vulnerability.”

On whether her husband is supportive:

“[Laughs] He doesn’t mind. I think the only thing he has ever quarrelled with me about it was when I kept getting shipments of random crap. He’s like ‘what is this? Why do we have a flesh bodysuit? What’s this leather harness?’ I’m like ‘It’s burlesque, it’s fine.’

On how she is battling mental illness:

“I don’t think anyone fully heals from mental illness. I think there is PTSD with anxiety and depression, that’s what I got diagnosed with. I had a really scary episode when I was in Texas. I was supposed to do a Mission Pro Wrestling show, and I knew I had to step aside because my mental health was completely breaking. I got diagnosed 2 weeks later with all those things, and I am on medication now. I’m also going to therapy every week, which is really f*cking hard. But you know what, I feel better and I am focusing on things that are not as much of a trigger as wrestling.”

Chris asks if wrestling is a trigger:

“It is. I want to be honest and say that wrestling has been a huge blessing in my life. It’s always been the thing that has put food on our table, from me being a child to my husband being in WWE, that’s all I’ve known. But with me wrestling, there is so much pressure and so many expectations. I have put so much pressure on myself because I have huge shoes to fill. It was getting to an unhealthy point for me. I keep trying to be a wrestler and be the wrestler everyone wants me to be, but I think I am content with my skills on the microphone and commentary. I feel the most at home doing that so hopefully someone will have me.”

On being expected to live up to her father, Eddie Guerrero’s legacy:

“I don’t know how he was Eddie Guerrero half of the time. My dad loved this business so much, he was constantly thinking about wrestling. No one can be him. It was getting overwhelming in good ways. I think when I announced my comeback, I was getting a lot of bites from promoters, which was very humbling. But they also wanted to put me in the very top positions, which I was like ‘I haven’t wrestled in 6 years.’ It was overwhelming. When I first went into wrestling, I went into the largest and most prestige company in the world. I am very grateful for that, but that also comes with the biggest amount of pressure. It was so intense, not to mention the Guerrero way, go hard or go home. High expectations are just in the family. I was having panic attacks just going to training sessions.”

On not using the Guerrero name in developmental:

“I remember being told, I’m not going to say by who, that if you suck, we cant drag your families name in the mud. I’m like [shocked expression]. I understood that. Again it’s like they never said I had to be as good as my dad, but there was always little things like that which are hard to ignore. That was day one.”

At what point she realized how famous her father was:

“That’s a tough question. I’ve always just been used to going to wrestling shows and going backstage. Honestly, I really realized when we were in El Paso for a house show. When people were throwing beer at my dad, because they hated him so much. We were in the ring too. One asshole did it and everyone got behind that. The way my dad could move the crowds was insane. I think I was 12 and that was when I realized dad was legit.”

On what Eddie was like when she was a child:

“My dad scared the sh*t out of me growing up. It’s so secret that he stuggled with alcohol and drugs. I think unfortunately growing up until I was 12 or 13, that was pretty much all I saw. It was a complicated relationship with my dad. I didn’t really get to know him until I was 13/14/15. He passed when I was 15.”

On if she remembers how she found out about Eddie’s passing:

“Yeah I do. I was woken up by my dad’s sister Linda and my cousins. They woke us up and I have never had anyone truly pass away until that day. They brought us out into the living room and they told us what happened. I think they told me separately from my sister, because mom wasn’t there. She was completely distraught, it was a terrible day.”

How much was Chris Benoit in her life after Eddie’s passing:

“I lump Chris and Rey Mysterio together, because they really looked after us a lot. People would check in and we would go to the shows. We were all in a fog at the time though. When it comes to Chris and Nancy, we were closer to Nancy. Nancy gave me a whole trunk of things from when she was on TV. I turned 16 the next year and all the boys my dad knew sent beautiful gifts to me. They knew how much it sucked.”

On her favorite Eddie story:

“He would do random acts of kindness all the time. One day I was at step team practice and he brought a sh*tload of McDonalds for everybody. One day he saw me and the kids were bored, so he went to Target and bought a bunch of water guns. Of course he got the super soaker and it turned into this battle. He would do things like that all the time. He had a big heart, when he was sober he was great and the person to talk to in the locker room.”

On her mom Vickie Guerrero:

“From growing up to now, my mom was my best friend. We were very close, she has mentioned that good and bad I am just like my dad. She was always so strong. I think it was harder to navigate when we were younger, my mom was always cleaning up after my dad. Just trying to get through every day. But my dad’s passing did bring us very close. She is my biggest cheerleader. When we [The Vaudettes] were on Chris Jericho’s cruise, she was my biggest fan. She was like [covers eyes] ‘I’m so proud of you! You are doing so great!’ Poor Chris Jericho, he was like ‘This is awesome, I don’t know how to feel.’ I see him as a wrestling uncle.”

On how she met her husband Matt Rehwoldt (Aiden English):

“So we met in FCW. I remember he came in on promo day and I noticed him, he was a very pale dude. I was like don’t they know we tan here. I remember being impressed with him on promo day, he did a promo and played guitar at the same time. I remember his promo skills were lit. We didn’t actually hit it off until we met at the Performance Center for the second time. We found out that we lived in the same apartment complex. He was then very helpful. Our first date was over True Blood. I had just finished season 4 and he had the season 5 boxset. I just walked on over, we didn’t watch it at all. We just hit it off, talked for like 8 hours and the rest is history. We have been married for 5 years.”

“My husband, my family and the hard times, I wouldn’t be here without them.”