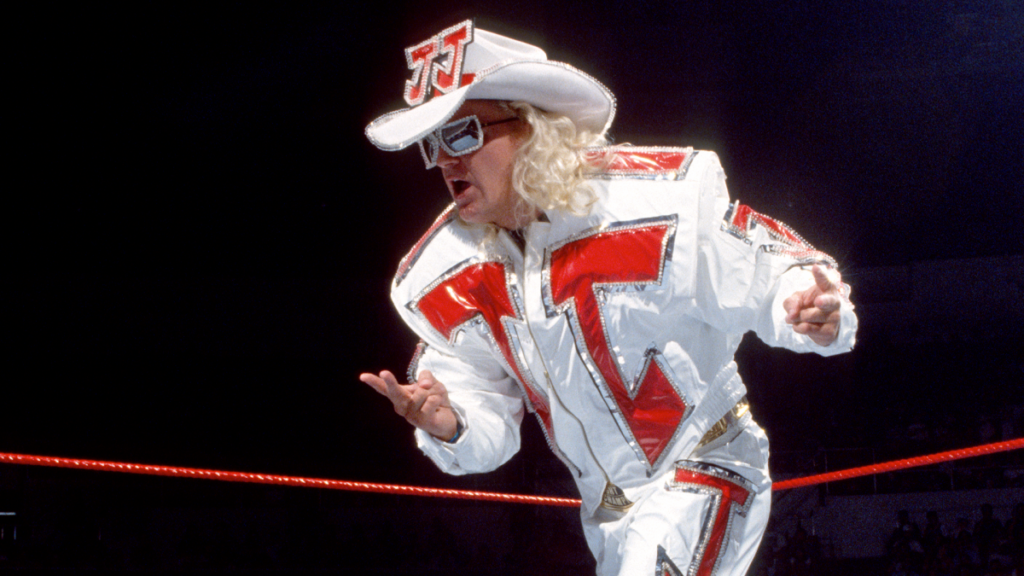 Jeff Jarrett is a professional wrestler inducted into both the WWE and TNA Hall of Fame. He is also a businessman and wrestling promoter. He joins Chris Van Vliet to talk about his new podcast called “My World with Jeff Jarrett” that he is co-hosting with Conrad Thompson, his legendary 35-year career in the wrestling business, some of the controversial storylines he was involved in with Kurt Angle, Hulk Hogan and Chyna, his favorite memories of Owen Hart, why he started TNA Wrestling, bringing in the 6-sided ring, how he came up with the phrase “Slap Nuts” and much more!

On whether he thought he would ever be starting a podcast:

“No I didn’t. It goes without saying that from business perspective you can and should learn from the past. I’ve always been thinking forward and raised in the business. No matter how good or bad your last match or story was, it’s in the past. You got to be better next week. I’ve never really looked in the rear-view mirror. Certainly growing up in this business, being in locker rooms and car rides, I’ve told a lot of stories and I’m not interested in telling them again. But with the world we live in and on demand entertainment is fascinating to me. I’m excited, Conrad has a unique way of diving into the story that highly interests me. There’s lots of narrative that swirls around the stories. And I was a wrestling fan before I was anything else, I love the industry in that aspect. And whether they love you or hate you, just keep talking.”

On what he is the most proud of in his career:

“The perseverance. Because this is not an easy industry at all. I’m one of 5 kids and I was the only one that got into the business. Many folks have said that my father being the promoter for you is either the best or the worst. I agree, it is both a blessing and a curse. But I’ve always loved it, got a passion for it. I was always fascinated by it as a young kid. Not just the product, but everything that goes around it. But I’ve just celebrated 35 years in the business. Whether it was USWA, WCCW, WWF, WCW, TNA Global Force, Hall of Fame all of that. When I look back, the perseverance and the drive, it’s up to me to get up and put on my work boots.”

On the genesis of slap nuts:

“That’s a funny story. My grandmother used to call folks “slappies.” That is people who slapped their gums. They know more and more about less and less every day. So just during that time, the slap nuts just rolled off. I was called in at Nitro when slap nuts was taking off. They said ‘We need to ask you a question.’ They were dead serious ‘What does slap nuts mean? We have looked in the Urban Dictionary and we can not find it.’ I’m like wow this business has come a long way, I’m being questioned about where slap nuts came from.”

On how to do a good guitar shot:

“Swing it as hard as I possibly can. You got to swing it as hard as you can, same as with a chair shot to the back. If you stutter, edges can get in. I don’t bat 1000 but not bad, accidents do happen, ask Kurt. There was a time where I busted him open a few times, it can happen. There was a time where WCW ordered prop guitars, if there was a gust of wind you had to be careful/ But the best ones are store bought ones with magic tricks I did to them.”

3 things he wish he knew if he started TNA:

“I started when I was 35 years old, that’s a young businessman for a start up company. It’s one show a week, but it is consuming. In 2002, we didn’t have the tools or capabilities. I used to say phone calls wouldn’t accomplish what a face to face would do. Video calls have somewhat advanced it though. Time management is something in the early days of TNA. It wasn’t like it was back then. Delegation would be number 2 and not to get hung up on single decisions would be number 3.”

On what is his favourite work of his career:

“There’s different eras. I’ve always said my early days in Memphis, working with Lawler, who was my idol. In my opinion he is right there at the top. I had a series of matches with The Moondogs, there’s WCW with the World Championships, I could go on. There’s TNA with me and Sting, it goes without saying he was a gamechanger. He got some momentum. There’s also Kurt Angle. Kurt’s timing and in ring skillset is unbelievable. His timing is incredible.”

On if any podcast subjects are off limits:

“When you say off limits. Look, I’m here to tell my story. I’ve had many screw ups and mess ups. At this stage of life, if there’s one thing that somebody hears and goes that’s interesting and they learn from it. Whether I can pass on experience I’ve had in the ring or a wrestler can hear it. It might be a business tip and I can tell people how not to do things. But in 2021 it’s on demand entertainment. If I can be a part of that, I’m happy to do that. We are in the world of sports entertainment. Today, the art of podcasting is as much of a part of sports entertainment as a headlock.”

On Vince knowing Jeff would lose to Chyna at No Mercy 1999:

“It’s like any promotor, Vince had to have faith in me. At the end of the day, he’s been around longer than I have. If I didn’t do it, so what? There’s tomorrow’s RAW to fix that. I’m banking on the odds that he has faith in me. The following day he took his company public. You can talk about WrestleMania and you can talk about Summerslam, but it doesn’t hold a candle to the day he went public. He built a 3rd generation business. He spent 16 weeks in 1999 saying he was going to take a professional wrestling company public.”

On alleged heat with Vince McMahon:

“That is something I’m going to get into with Conrad. Vince didn’t have to pay me to do the Chyna match. He’s the promotor. But he gave me the cheque, I tried to give my effort as much as I could. The storyline was marvellous. But to get the opportunity, we hugged after the match too. When my wife got sick, Vince called. I’ve talked to Vince about TNA, we are businessmen. There was never really anything there, but it’s a business. But why bring in someone who was on the other side of the fence?”

“A lot of people say tell me a funny Owen story. The one thing Owen taught me was integrity. He didn’t drink or smoke, I wished I listened to him. He knew how to take a boring journey and make it entertaining. That in of itself, he enjoyed everyday. That’s one of the things that rubbed off. There’s no such thing as a bad day for Owen. But also the way that he conducted himself. He would stand up for what he thought was right but in a respectful way.”

“My creator God, my saviour Jesus Christ and the spirit that keeps me going every day.”