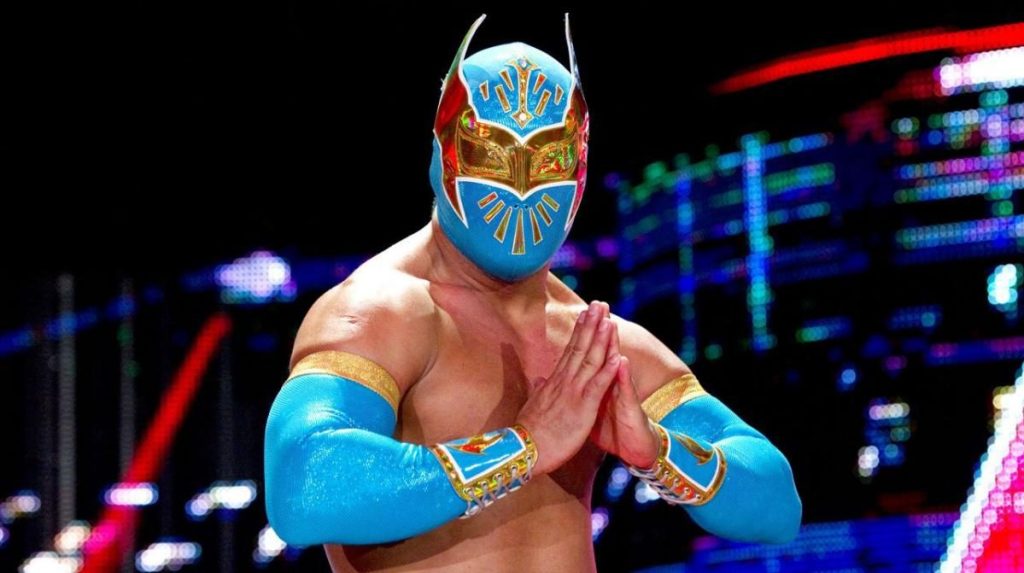 Cinta de Oro better known as Sin Cara and Hunico in WWE joins Chris Van Vliet from his home in El Paso, Texas. He talks about his 10-year WWE career, wrestling with and without a mask, replacing the original Sin Cara to become the second Sin Cara, why he asked for his release from WWE, being inspired by Rey Mysterio and Eddie Guerrero, and much more!

On deciding which mask to wear each day:

“Well the idea with me is that I always try to combine my shirt with my mask. When I do an event, the things I wear have to combine. I guess it is like OCD, where everything has to be in order. I’ve always been like that with everything that I’ve done. If not I’m like this doesn’t look good, this doesn’t combine. But I always like to be in control in that sense.”

On the name Sin Cara:

“Sin Cara means faceless. That’s why the mask covers everything, the eyes the mouth, everything. Now with the pandemic it’s funny, because people always say to me ‘How do you wrestle with a mask that covers your mouth?’ I say ‘How can you walk with your facemask on?’ And people complain about it now with a little facemask, imagine working with this mask [holds one of his wrestling masks up to the camera.] for 10 years or more.”

On wearing a mask:

“A lot of the boys wonder how I can wrestle with this thing on, I feel like my head is going to explode. I don’t get claustrophobic I am already used to it. When I wear a mask with my mouth exposed, I feel like I am naked. I got so used to covering everything, but it’s harder to talk in those masks. But I just got used to wearing the full mask, it becomes a part of you. It also comes a part of who you are. For me, wearing a mask has always been my essence. It’s who I am, my culture and what I have done with my life. When I was wrestling for a couple of years as Hunico [without a mask], it was great. I enjoyed it a lot and it was fun. But I thought that something was missing, and it was the mask. It’s fun to just go where I want and wear the mask, people don’t really know who you are. Now I can have a regular life. But sometimes fan recognise me [without] but it’s better for pictures if I have the mask on. I always have a mask with me in my car or bag for those moments.”

On being the new Sin Cara and trying to be different:

“Yeah because I changed a lot of things up about the character. I wasn’t trying to wrestle like he was wrestling. I was doing my own thing and putting my persona into this new chapter of Sin Cara. When I got the call to continue Sin Cara, I thought I was dreaming. I debuted it in November 21st 1999 as Mistico. A few years later, I never registered the name, because I didn’t know you had to go through all that legal stuff. The company in Mexico registered the name Mistico. My lifestyle was made into a gimmick. I was a missionary and I preached. I used to get on buses and knock on doors, stuff like that. It was tough. In 2004 I became a world champion.”

“This kid comes in and he is announced as Mistico, and the boys think it’s me. He became this amazing star in Mexico. I got hired by WWE first, and when he came down to FCW a year later, he was hired. They do this big press conference announcing him as Sin Cara, and he went straight to television. I remember trainer Dr Tom Prichard saying to me ‘I understand if you don’t want to work with him.’ This was because I told him the story. I was like no I have no grudges. If I get to work with him, so be it. Next thing, Mistico is out on the road, and he got suspended. I don’t know what substance he tested positive for, that was when they put me in as Sin Cara in the beginning. Then we did the feud where he got to keep the Sin Cara name and I became Hunico. But when I got the call I was in shock.”

On challenges in WWE:

“It was tough and I will tell you why. Imagine having this kid come from Mexico and trying to make it into a big star. This was during the time that Hunter was trying to show the boss that he could run the company, this was before NXT. This is the biggest signing in Mexico he had, and he doesn’t do anything. In the eyes of Hunter it was like I’ve failed. The decision of the name Sin Cara was made by Vince to give me the name. I never got the support of Hunter, because it wasn’t his project. If I succeeded, it would be a bigger failure for him.”

Did that affect a potential push:

“Oh big time. I wasn’t getting that inside support when they were having those meetings. It wasn’t about getting people over. When the original Sin Cara was there, he would get those opportunities all the time. With me it wasn’t like that. I felt like I always had to do more to show them that I belonged there. And that was tough. I was there every week, never failed and always did what I was asked to do. But it became like a trend. Every time I went out people knew I was going to lose. It was tough watching those guys come up and I’m just sitting there.”

On what he is most proud of during his ten year run in WWE:

“Well I got to travel the world and meet a lot of amazing people. Those memories, no one can take them away. When I was in the ring, no one can take away my talent. Down there they can write whatever they want, with the politics and whatever. But in that ring, it’s just you and the people. Obviously it took a lot of time because I was out of the house for many years, so I missed a lot of things with my kids. I think the thing that I am most proud of is the memories that I made. I’m not a perfect person, but you talk to a lot of people, they will say that I am very loyal.”

On what he is most proud of in his time in WWE:

“I got to work with Andrade when he first came up. Let me tell you why I am very proud of being able to work with Andrade. I met him when he was 14 years old. I was in my hotel room and this kid comes in [young Andrade] and he’s like ‘Hey, how are you doing?’ He then tells my friend ‘Hey I think I’m going to go to Mexico City and see if I can make it.’ So he left when he was 15 and he became this legend and this big star. I got to work with him many years ago in this tournament. Fast forward and we are in WWE together. When he was in NXT and they called him up, I got to work with him. It was fun because he was my friend, and at the same time we became enemies. Also when you work with somebody that you know, you tend to hit a little harder. This is because you have more confidence and more chemistry together. But it was fun to show him the ropes in WWE, because it was different to working down in Mexico.”

“I put out my release November 11th 2019. It wasn’t one thing that I decided one day, that I’m leaving. It took me a few years to digest everything and to put everything in thought, if I really wanted to make that decision. It was tough, because me being a young kid from El Paso having this amazing dream of working for this company. But then the time comes where you don’t want to work from this company anymore. How did I get from there to here? In the thought process and in my heart, it was tough to realise that they didn’t really care about me. I wasn’t in that line of people that they wanted to have to accomplish things within the company. I remember calling up some of my friends, praying and thinking is this the right decision for my life and my career? Everybody pointed out to me the same thing, it’s not about the money it’s about being happy and doing things in your life that you feel you’re going to achieve.

I remember one time I had a match and then my daughter said to me ‘Hey dad. How come you always lose?’ That was tough, I didn’t know what to say to her. I said to her ‘Don’t worry about it baby, it’s just my job. I get paid the same’ It was tough to tell your kids it’s the business because of who I am. If it was because of this [holds up fists] then it’s different. But it’s entertainment, I understand it. When I took that decision, I was completely done. I was done with the politics. It’s not about having the talent anymore, or a great body. There’s always an excuse. [They might say] ‘Oh you got to get in shape.’ Look at Kalisto. He’s in shape and what has he done? Nothing. When I took the decision, I was completely done. It was time for me to put my feelings out. I’ve always been a private person, I never talk about my private life on social media, because it’s tough. It was just that I wasn’t getting the opportunities that I thought I deserved. I was there for a lot of years and I helped a lot of the guys. I have nothing against that, I’ve always been a team player no matter what they ask me to do. It was time for me to leave, I didn’t want the whole pie but I wanted a piece of the pie. But when I took the decision, I was happy for it.”

What he has learned during the pandemic:

“The first thing I have learned is that I can survive outside WWE, and there is life after that. A lot of the boys are afraid to tell WWE how they feel or what they want to do, because they think there is northing else. But there is. Also I love my kids more than anything in the world, I get to know them. I just want to continue living, and motivating people. God has a plan and we need to continue working to that goal, no matter how tough it is.”

“My kids, my health and my parents.”