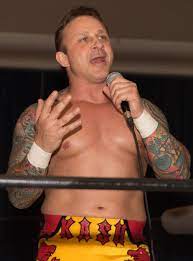 Kid Kash On The Moves WWE Wouldn’t Let Him Do, ECW, His Resemblance To Kid Rock

Kid Kash (@davidkidkash) is a professional wrestler known for his time in ECW, TNA and WWE. He joins Chris Van Vliet to talk about how he got his start in professional wrestling, getting signed to ECW, being given the name “Kid Kash” because Paul Heyman thought he looked like Kid Rock, the restrictions he had in WWE, making his MMA debut, what he learned from Ricky Morton, 3 things he is grateful for and much more!

“I was David Jericho from the start of my career. And me and Ricky Morton were driving down the road one day, and we were coming up and at this before I even got in the ring, you know, and we were just driving down the road. And we looked over, coming up with just different names. And I saw Jericho temple shrine sitting on the side of the road in I think it was Blanc Hill, Tennessee, as you’re coming down the interstate. And I just said Jericho. And he looked over at me and he was like, David Jericho. [I ask him] You like it? He goes it sounds better than all the other stuff we’re coming up with, let’s use it.”

On finding out about another wrestler with the last name Jericho:

“All right. When I saw him one time, for the first time, in Smoky Mountain Wrestling, him and Lance Storm showed up for a little bit, and they were The Thrill Seekers, and he was wrestling there. I had already dropped about the name because I started going up to you know, like all over the country and stuff like that. And then ECW whenever I went up there, we called Davy Morton. I was doing Davy Morton then, but no, actually shoot, I’m sorry. The first time I went up there, so it was after that, when I really noticed Chris. This was the first time I went up, they let me do David Jericho. And I did David Jericho for the first six months. And then one day I was just showing up and they were like your Davey Morton. Before my match that night, I went from Davey Morton to Davy Morton Tyler Jericho, because my son’s name was Tyler. We were still coming up with names in the dressing room. Chris was making a big deal, you know, a big splash and stuff like that all over the place. So we just decided to change the name. And then one night my son’s name was Tyler, Ricky’s name was Morton, and Jericho was what I had been using. So we came up with Davy Morton, Tyler Jericho. Well, then it went to Davy Morton Tyler Jericho Panzano whenever I tagged with Lil Guido. So I get to the ring and everybody started chanting, ‘what’s your name?’ ‘What’s your name?’ That was fun. It was just fun. That was part of the absolute best organisation I’ve ever worked for, actually really, truly wanted to be a part of.”

On a possible return to the ring:

“I do [want to have another match]. Well, I’ve actually wrestled a few just like really easy matches. The last four or five months, I wrestled Jerry Lawler there in Nashville. So we didn’t do anything. You know, I mean, nothing. I think I took two bumps. The bumps felt great, you know, felt like nothing, you know. I can tell I’m a little ring rusty, you know, my decision making is not like what it used to be, you know, so it’s like, I had to think a little harder, you know, remember stuff that I’d forgotten, you know, and hadn’t applied in such a long time. But it was easy. It was an old Memphis match, wasn’t anything good. And then the other match I had was a tag team match. Six way tag. Just took the hot tag, boom, boom, boom, drop, drop, drop. That was it. Let the other kid do the splash off the top ropes and he pinned the guy and I just cheered around with everybody else.”

On cutting back on high flying:

“I started when I was in WWE, which it wasn’t by choice, it was because they didn’t want me to do that much. They wanted me to still tell the story and still wrestle, you know, that kind of thing. And plus the matches are like anywhere from three minutes to, I mean if you got a 15 minute match you are a lucky, lucky man. Hell, after wrestling three and five minute matches, if somebody did ask me to wrestle 15 minutes, I probably could not have, probably got blown up. So you get used to wrestling such these quick matches, you know, but yeah, they would just, they came to me one night, I was like, try not to do the hurricanrana. I’m like, why not? Well, that’s Rey Mysterio’s move. Okay? Don’t do the moonsault off the top row. Okay, why not? Well, that’s Super Crazy’s move. Like, okay, so I couldn’t do the moneymaker pile driver either, you know, because they had the law. So that’s when I came up with the dead level, you know, the brain buster and stuff. So everything else was just elementary sh*t, if you watched the WWE, it was just crossbody stuff, I didn’t really do any kind of the stuff that I normally would have done. But then when I left there and went to TNA, I pretty much completely quit doing it cuz I was turned to you know, back to being a heel, wrestling, Jesse Sorenson and guys like that, so I didn’t really need to do the high flying and plus, some of the stuff was hard to do anymore. Like, I used to run up the rope and do the flying hurricanrana. But I noticed that my right knee wouldn’t jump as high as my left knee anymore, and I couldn’t do it from the other side. I had to continue to do it from that one particular side. You know, all my hurricanranas went this way. I was never trained to go this way. So back then I just, my leg wouldn’t get up that high to hit the rope. And if it did, it just didn’t have enough in it at that point to get me up to the top rope. I think who was it? Jesse Sorenson, like we’re trying from the other side. And it was, it was a mess. I was like let’s try not to do that. My coordination is just not the same.”

On today’s product and if Kid Kash is watching:

“I’ll still watch it. Every now and then I’ll watch the AEW, I’ll pop it in, you know. Some things I love to watch on a show. But then some things are like, I got to turn this [off], you know. I don’t really watch too much WWE. As for me, I came from the school of work, where you get out there and work, you know, but now it’s just so many promos, and just so you know, there’s no work. You know, it’s just promos all the time. You know, and I love watching women wrestle but Jesus Christ, how many women are gonna wrestle on one card? I mean, yeah, you know?”

“It’s probably less politics, but I think it’s more woke still. I watch some of the show, I wouldn’t fit in there. You know, I could probably be an agent or something, but I wouldn’t fit in there as a worker at all, because just everybody’s so much younger. And everybody is, they don’t look the same as my era. Whenever I was wrestling, everybody, you know, I was a short guy, so I had to stand out. I couldn’t just be a high flyer, I had to really stand out. So I hit the gym, every chance I got and I got on steroids, I got on the whole nine yards just so I could get that physique, to stay on TV. But you watch it now. And you see guys on there that look like the guy in the crowd watching. And they’re putting them over big guys, you know, so I’m kind of confused. Does the storyline not fit anymore? You know, I mean? Is that how it is now because back in the day, the big guys used to demolish the little small weak guys. Now the little small weak guys are beating the big guys. So it’s weird to me, you know?.”

On still being called Kid Kash when he is older:

“[Chris references that Kid Rock is still called Kid Rock] Yeah, a little different though. You know, he’s a rapper and musician and stuff so he can probably get, I’m sure when he’s 70, they’re not going to be wanting to call him kid anymore. They’re gonna call it Bobby.”

On hitting a Hurricanrana from any angle:

“Yeah, well, whenever I was in ECW, everybody there my size was, you know, was a high flyer of some sort. And I used to wrestle guys like E.Z. Money, Chris Hamrick and guys like on the independent shows, Eddie Golden, like way back before I even went to ECW and stuff. And when I got there, everybody was doing it. And generally, it was just me doing it on the show, you know, the indie shows. When I got there, I had to just be more creative, you know. So, the hurricanrana is something that I had always kind of done and stuff. So I was like, what’s the one thing that I can like, make stand out above everything else? You know, that was such an easy move for me to do, because I was you know, I’m not a very big guy, you know, even in ECW I was probably only 175 pounds soaking wet, I’m about five nine. But I got a weird figure. I wear 32 inch leg jeans, I got long legs, but I have that short torso to where I look more jacked than what I really am. Only problem is I can’t get my legs to look like my upper body.”

“Well, I’m not saying who, where he got it from, but I did a try out for WCW under the whole mask you know the whole paint thing and stuff. So I noticed about six or seven months later he started changing his face paint. So I’m saying, I don’t know, didn’t ask any questions, but you know he’s Sting and I’m not, so he can do whatever he wants.”

“I mean, I’ve done some MMA fights. I mean, I wasn’t like the greatest fighter ever, you know, but I did a lot of tournaments, NAGA tournaments, Pan Am’s and stuff. And then I did a few cage fights. I mean, you know, won two and lost two, you know. So, I mean, I thought about going in, but by the time I got to the point of getting into the cage, my God, I was like, 35 years old.”

What is Kid Kash grateful for:

“Family, health and the wrestling business.”