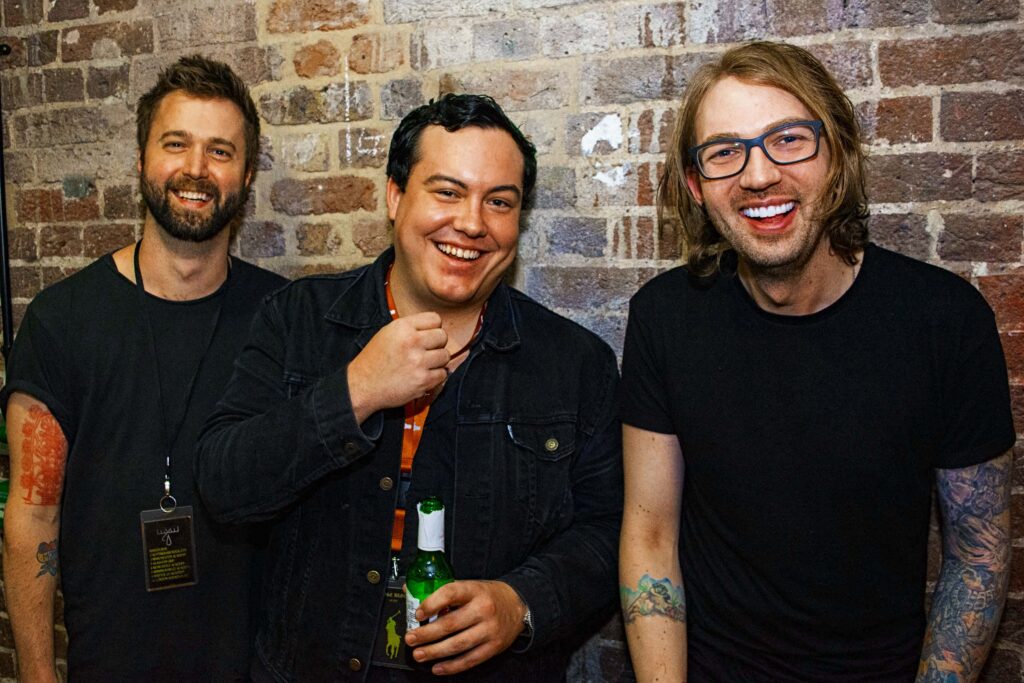 The Dangerous Summer On Their New Album, Overcoming Adversity & blink-182 Getting Back Together

The Dangerous Summer (@thedangeroussummer) are a rock band from Ellicott City, Maryland comprised of AJ Perdomo, Matt Kennedy, Josh Withenshaw and Christian Zawacki. They join Chris Van Vliet inside the Blue Wire Studios at Wynn Las Vegas to talk about their new album called “Coming Home”, how the band came together, overcoming personal hardships and breaking up, why they got back together, the process of writing songs, they reveal the name of their new album “Gravity”, their take on Blink-182 reuniting with the three original members and much more!

“It was painful, man. It was like watching one of your best friends die, it was a sad time for us. I think we needed it though, I talk about it all the time, the steps that it takes to get there, you have to go through the sh*t to get there. Sometimes you need to get away from stuff and I felt like I hated it all completely.”

On bands staying together for 30 plus years:

“Dude how do they do it? Like who is on there? The Rolling Stones are they original? But how do you keep it together? Especially with being artists, we are all f*cking insane.”

“Man, it’s funny. I was initially like we should just drop the summer. Let’s just call it The Dangerous. But The Dangerous Summer is The Dangerous Summer, it’s just this kind of machine that despite falling apart millions of times it always comes back together. It’s a wild thing man, but starting over is never a good thing.”

“I actually had an awkward interaction with Tom DeLonge [Blink 182 lead singer]. So we were playing a show in Australia with Angels and Airwaves, we actually flew on the plane there [with them]. We were instant messaging on the flights. When we fly back, I had to talk to them, because not now then when? I was like ‘Hey man, I’m in The Dangerous Summer, we played Soundwave. I’m a huge fan of everything that you’ve done.’ He goes ‘How was it?’ I’m like it’s good, and that was it! I ruined my moment!. Someone you care about and you grew up listening to, what do you say?”

On writing a song that is personal to other people:

“It’s crazy man. You know, I think my coping mechanism of dealing with the magnitude is that I’m like a good antenna man. It all comes from the universe, whatever it is, it comes from somewhere else. I feel like the words are a message from the universe and people interpret it the way they want to interpret it. For me it is like a healing, so I take peace from it. It’s unreal to hear the stories where people say things like we’ve saved their life. But it’s not just me, it’s the magic of the universe.”

On where The Dangerous Summer are currently based:

“I’m in Richmond, Josh is in Nashville and Christian is in Virginia Beach. We all fly in when there’s a tour but it makes us work harder. When we have to fly in together, it’s like ok, let’s make an album. When we are on vacation, we are off and we are chilling, we have a new album ready to go. It might be called Gravity, there you go, you heard it here first.”

On being put on earth to be musicians, but then doing the 9 to 5:

“I actually kind of loved that. If people say I should be an artist, a part of me is like well no, f*ck you. I need to have that power to do whatever I need to do. I saw the grass was greener on the other side, it was nice to have that for a while. So I was living a peaceful life, but it was then too peaceful.”

On being in LA:

“You know what it’s like being in LA. No one actually works here in LA, everyone is just like super chill and whatever. There’s just a lax atmosphere man, my boss was high every day. We travel so much, sometimes you dream of not travelling. But then you get home and you realize you do like the travelling. You always want the other side.”

On life after touring:

“To deal with the feelings of being on such a high from playing shows and then it just stops. Some days you don’t want to get up in the morning and you don’t know what to do with your life. You just have to stay busy and just keep working.”

“I think he’s cool man, I like a lot of the music that he has put out. I see him carving his own way, he is an artist just like us. A lot of the Soundcloud stuff now is like the Lil Wayne thing, they are rappers but they want to be rockstars. This feels like the return of rock, guitars are coming up and rock is returning to the radio.”

On what is the most emo lyric of all time: