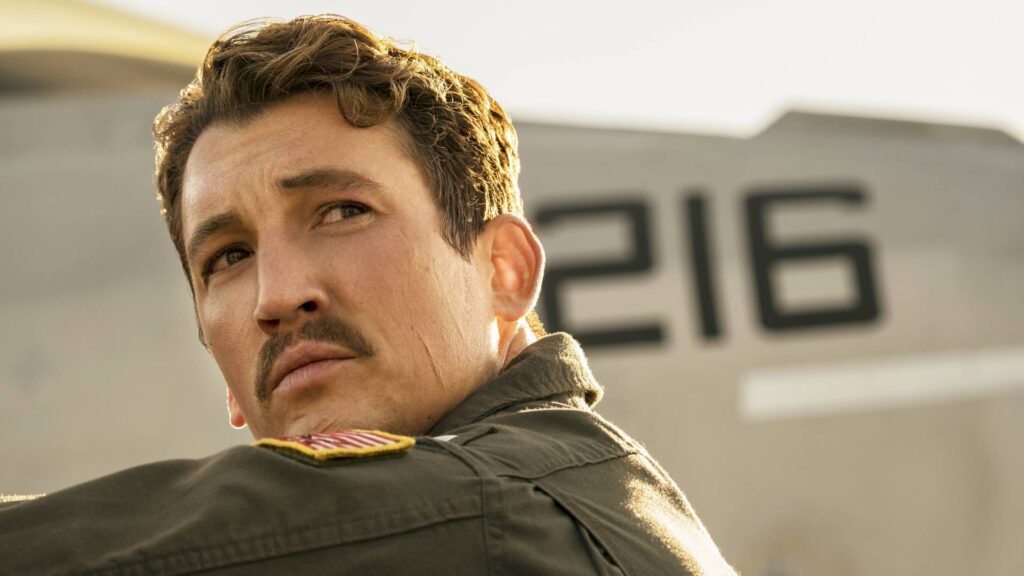 Miles Teller (@miles_teller) is an actor known for his roles in films like Top Gun: Maverick, Whiplash, The Spectacular Now, War Dogs, Bleed For This, Footloose and The Divergent Franchise. He joins Chris Van Vliet to talk about his new movie SPIDERHEAD that starts streaming on Netflix on Friday, June 17th. He talks about working with Top Gun: Maverick director Joseph Kosinski on Spiderhead, what he learned starring with Tom Cruise, his wife Keleigh Sperry’s thoughts on his moustache, the role that changed his career and much more!

Miles Teller you are just absolutely crushing it! You have this and Top Gun, two movies out at the same time:

“I know, and a show. The Offer is now on Paramount Plus. It might be a bit too much.”

This is incredible, congratulations. When you work with Joe [Kosinski] on Top Gun and then on Spiderhead, is it like rekindling with an old friend?

“100%, I mean Joe and I have had such a good time. We are still in the middle of the Top Gun press tour right now and doing Spiderhead press together. He is my brother from another mother. I feel like we have a good thing going together, we have done 3 now and I hope there are many more to come.”

That Top Gun moustache was epic. When you wrapped Top Gun did you shave it right away or did you hold onto it for a while after?

“I was sad to see it go, my wife, I think she was like on a calender counting down the days until she could shave it.”

Your character in this film is in the place that he is at because of a specific moment in his life. I’m curious, what for you is that defining moment that got you to that next level?

“Oh man, I don’t know. I think that I got really lucky with this first movie that I did, which was Rabbit Hole. To get that opportunity right out of college, right off the bat I was in a movie that people saw. Nicole Kidman got nominated for an Oscar for it, that was a really, I couldn’t have started with a better film. I think each film builds the audience in a bigger way, and now with Top Gun I will see what happens after this. I am taking it all in as it comes.”

What do you think is one piece of advice you learned as a young actor that you carry onto the set as an older actor?

“I think it carries over with the work. I think some people get too caught up in how they are perceived, so they try, I don’t know, it’s really all about the scene work. Something that I have taken, I have been first on the call sheet a couple of times, that’s something I take with a heft amount of responsibility. I try to be there for the cast and the crew and try to bring a certain levity to certain situations. I understand that there are people working tougher than you and longer hours than you, so don’t take yourself too seriously. That is something that I have maintained.”

You have to play a wide range of emotions in this movie, which is the hardest?

“One scene was tough because I was talking like it was the most beautiful thing that I had seen. My character’s serotonin was pumping and it’s all imaginary because I am just staring at a bunch of crew guys. I remember there was this garbage truck that kept driving by and I was frustrated by it, that was a tough one.”

When you have to learn a specific set of skills, such as playing the drums in Whiplash, can you still do those like you did on set?

“Well I have always been a good dancer, I just want to put that on the record. You either have rhythm or you don’t, it’s not really something you can learn. But with the jets, that was something, being able to withstand the G Force, that is a depreciating skill. If I went up in an F18 tomorrow, I would puke.”

You filmed Maverick and then you did Spiderhead, what is something you learned from Tom Cruise and took to this?

“I think like I said before it’s that leadership and responsibility. Also to understand how many people are feeding their families from this business. There is always somebody working longer hours than you and doing a job you don’t want to do. It’s all about acknowledging everyone and I try to get to know a but about everyone that I am working with.”

Miles Teller stars in Spiderhead, which is released on Netflix on June 17th.