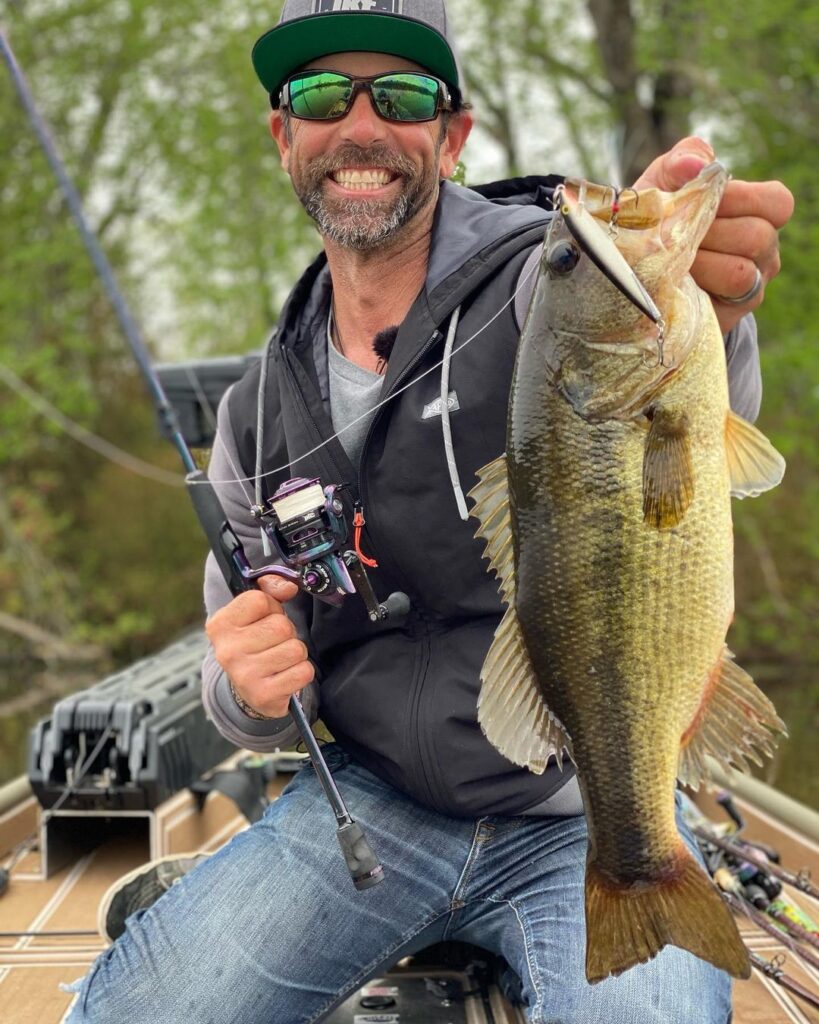 Mike Iaconelli (@mikeiaconelli) is a professional bass angler, television host and podcaster. He joins Chris Van Vliet to talk about how he got started as a pro bass fisherman, how important it is to be true to himself, why he lives by the advice “Never Give Up”, his favorite lake to fish on, moving from the Bassmaster Elite Series to Major League Fishing and then qualifying to fish for BASS again, what his current goals are, the biggest things he has learned from fishing and much more!

Mike Iaconelli On explaining his job:

“It’s an easy explain and a hard one at the same time, so I will try to navigate in the middle here. Our sport, professional bass fishing, is set up like many other sports. You come into the sport as a young amateur and work your way up from the grassroots level. As you move up, your skill increases and your qualification increases. I started out as an amatuer angler, did that for a few years and then advanced to the semi-pro level. I did that for a few years and finally accumulated the points to fish professionally. That part is easy, we travel around the country and fish regularly. The hard part to explain is that our sport has other sports in it like Nascar and a little bit of wrestling. Branding, marketing and promotions are just as part of the sport as the actual sport itself. That part is a lot of what I do as well. I work with companies to promote their products, market myself and help people sell their products.”

On there being big money in fishing:

“There is real money in it, but if you strip it all away then I would still be doing it. Our sport, when you look at it, it’s very young compared to other professions. Baseball and soccer have been around for hundreds of years, but fishing started back in the 70’s. Because of that, our income isn’t at the mega sport level, but it is definitely getting there. If I could get by I would still do it, but the average event is around $100,000 to $150,000. For championship events it can be a half million for the winner, there have even been some million dollar tournaments. But the real thing is the amount of money you can make above and beyond your winnings, because it is hard to win. I know it’s like this in other sports, but I have been doing this for 30 years and have won 12 events. I am proud that the sport has gotten to the stage where a young angler can make endorsements and a living.”

On fishing not being seen as a sport:

“I have been fighting this battle for a long time. I can see, because fishing has a lot of stereotypes attached to it, some are deserved and some are not. But fishing should be a relaxing sport, but it is also very competitive. To get to the top level, you need the same traits that any top athlete has. It is a lot less physical, and that is where the confusion lies, but there are just as many mechanics. From a mental side, I would argue that fishing is more challenging. We are in an environment that we can’t control and are out there for 8 hour days in all conditions. We have to deal with all these things that change hour to hour, you have to be a study of the fish and adapt and outsmart the fish. It’s a lot, I love defending fishing as a sport.”

On all the skill sets needed for fishing:

“It’s a lot. For a lot of people who remember a Rubik’s Cube. For someone to just solve a side, and I have never solved a Rubik’s cube in my life, but to solve a side was a big deal for me. It’s like fishing, you have to get all the elements right and keep adjusting. You finally solve that side, and that is fishing. The side being loved is you catching the fish and figuring it out.”

On Mike Iaconelli being able to be himself:

“So it was in 2002. At that point, I started to let my guard down and was getting sick of being someone that I wasn’t. But in 2001, my uncle Don, who was like a dad to me, my dad passed away when I was 2 in a car accident. So my uncle was my father figure and was the one who introduced me to the sport. In 2001 he was going through stage 4 Hodgkin’s lymphoma, the diagnosis was not far along. But as he was going through that fight, my mindset changed and I said to myself that you have to enjoy life more. That was where the never give up came from. Oh by the way, my uncle beat it and he is still here today, shout out to uncle Don. But not being scared to let people know who you are, when I did that, my brand and my fanbase and my sponsors, it all started to boom. I think it was a big year because I realized you can be strange or odd and people will still accept you.”

On Mike Iaconelli finding his way in the angling world:

“It was a different world back then. Professional fishing in the mid 90’s was not a sport that catered towards non traditional southern anglers. It was a bit of a struggle, I have experienced things that if I had been from Alabama and had a southern accent, I wouldn’t have gone through those. But saying that, I am glad that I did, it made me who I am today. I am the person in my life because of those things that I went through. There were moments where I questioned if I should be doing this, even the league didn’t want me there. Everything was tougher, but as I broke the barriers down and gained the trust of the other anglers, they realized I was strange but here for the right reasons. Eventually, people saw that and it became a lot easier. As our sport became more mainstream and more national visibility, I think those barriers started to break down more.”

On Mike Iaconelli saying he was done in 2003:

“That may or may not be true. Here’s the thing, whatever your background is, I do believe that things happen for a reason. I can look at moments in my life and things happen that shouldn’t have. The classic win in 2003 shouldn’t have happened, sponsors were getting ready to leave. It was a dead end road but all these things happen where I catch the largest fish and have a 2 hour boat ride to make it back in time. I believe things happen for a reason and that you will know when it is time to move to the next thing. I took a small hiatus when COVID hit and the sport shut down. Even when it started to come back I took a year off, it was such a nice reset and I needed that. I think you know when you are ready to stop or keep competing. I am 50 and I want to win again, I want to win more trophies.”

On Mike Iaconelli moving from major league to bass fishing:

“It was a super tough decision. I’ll try to give some context to the listeners. Our sport had a shakeup where a new league was formed, and a lot of the big athletes defected to this new league. The reasoning was almost identical to other sports, leading up to this new league forming, there was this thing where the anglers felt like they were not the priority. A lot of us felt like we were down on the ladder that was important. Those 80 anglers, including myself, a lot of that was based on a unified feeling of needing to change this. Do we want all these young anglers feeling 8th or 9th most important? No, it was about the athletes getting a good income and being top priority. I might get hate mail after this, but it needed to happen. A lot of guys want to be here instead of there or vice versa, but it has to be done. I think it made both leagues realize that the anglers are the most important thing, they are the ones generating the money, it was a wake up call. But for me, major league fishing didn’t pan out to what I thought it would. It started to feel like how I did before that, the same problems started to creep back. For me it was a no brainer to go back to bass, it is a better environment there and just felt more comfortable. But you can’t just go back, you have to re-qualify. There was a legends exemption rule, but I didn’t want to go back that way, I wanted to qualify. So last year I had to qualify, get in line, work hard, get dirty and qualify. I re-qualified and it feels good, this is where I belong.”

On the biggest change in the sport:

“Man there has been a lot. Technology is so big in our sport, I would argue bigger than in other sports. So in some sports the material that for example makes the bat, it gets lighter. But in our sport the sonar, the GPA, the boat motor… That’s helped the anglers become so much more efficient with that digital technology, it’s hard for me to keep up! But to compete, you have to keep up with those technology changes. Also now it is how important having a brand of digital content has become. SOme of our new anglers get it and some don’t want to be bothered by it, but that’s going to hurt them in the long run. It’s very difficult making money by just catching fish.”

On his morning routine:

“So on regular days I wake up at 6 in the morning, I have a big black dog and kids that wake me up. On fishing days it’s a lot earlier, like 4am. I wake up and get a quick breakfast and then off I go. On the practice days, I am out there from dark to dark. The stereotype is that there is not a lot of activity, but it’s a lot. I am making 1,000 casts, the amount of calories you burn is incredible. Then at the end of the day, get to the hotel room, throw some food down and look at the maps and take notes. Then it is the same on the tournament days and it is back to back. As I am getting older I am feeling it more, definitely taking a toll more, but I am still excited about it.”

On if his son will be better than him:

“I think so. I think that Vegas has things that I wish I had. He’s got natural ability and the negatives of my biological makeup. Vegas is very even keeled and better at going through the lows. I was a boat captain for him for a tournament where he lost. I couldn’t say anything but I saw he didn’t let it get to him. He also has an incredible amount of patience, I look back at times where I wish I could have slowed down, he has got that.”

On what Mike Iaconelli is grateful for: