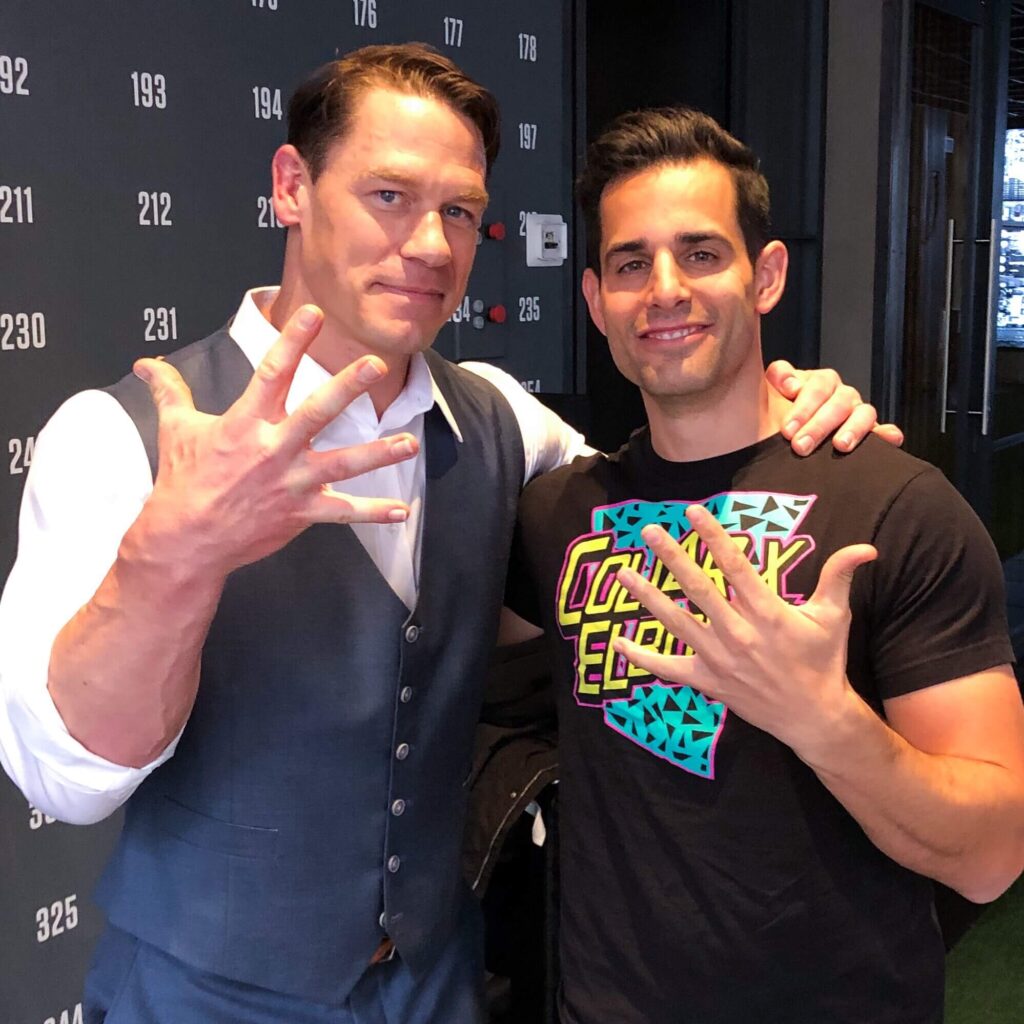 On this episode of Insight, the tables have turned and I am on the other side of the mic as a guest on Travis Chappell’s podcast called “Figuring It Out”. I talk about growing up in Pickering, Ontario, Canada and how I fell in love with broadcasting at 4-years old. I also talks about why I decided to study Communication Studies at Wilfrid Laurier University, how I landed my first radio job, my favorite interview moments, what I’ve learned from my parents and much more!

Growing up in Canada:

“So I grew up just outside of Toronto. I’m Canadian from a town called Pickering, which is just outside of Ontario. It has a population of about 92,000. I have an older sister and my parents are the greatest example of companionship, friendship and love. They are celebrating their 47th wedding anniversary this year, so I grew up in a family filled with love. I felt like I had endless possibilities and I could do whatever I wanted. I played a lot of sports growing up, tee ball was the first one, and of course if you grow up in Canada you have to play hockey. In elementary school the only sports were track and field, cross country, volleyball and basketball, and I did them all. When I got into high school I played baseball there and got onto the wrestling team too, sports was always big in my life. I remember being 4 years old and I was given a Fisher price tape recorder radio with a microphone attached to it. So I would pretend to be a radio broadcaster at 4 years old, so I would record little tapes of the announcer, that was my first memory of it. I remember being so passionate about it and drawn into it, I love the idea of presenting to people.”

On discovering the passion in high school:

“In high school I was the vice president of the student council, mostly because they got to do the morning announcements. Every morning I would say ‘Good morning Pine Ridge!’ like Good Morning Vietnam. We also had communication studies in our high school where we would make TV every week. We had a TV studio in my highschool and we would rotate through all of the different roles, that was where I learned what communication studies was. So when it was time to pick a major in college, communication studies was fun. Let’s do that. It was a major long shot to be on TV, but you are 17 or 18 years old and picking your college major, which is crazy.”

On knowing this was the career:

“So I was pretty dead set on giving it my best shot on being on TV. I had an epiphany in my final year of college. Now college is a lot of fun, you meet a lot of people and experience a lot of new things, beer is one. I was living with 4 of my best friends and we were going to graduate 7 months from then. I remember thinking that when I graduate, that’s it, I have to work for the rest of my life, and you realize this at 21. At that moment I made it so I would never hate my job. I saw too many people hate Sunday because Monday was next. I was so aware that you work for half of the time that you are awake, you spend more time with your colleagues than you do with your partner. But here’s the thing, people spend more time putting the work into dating than they do in their job. So at that exact moment I had an epiphany and it hit me like a ton of bricks. I reached out to every radio station in town and said that I wanted to do this and see how it’s done. One radio station said sure, come on out.”

On getting my foot in the door:

“So I asked to volunteer, and the radio station said I could be part of the street team and hand out the flyers. This other radio station said that they don’t take volunteers but offered me a job! They said it only pays $8 an hour, but it was $8 an hour more than I thought I was going to make. I was a board operator for all of these talk shows, that was how I got started. Fast forward to graduation and I knew I needed a job. I reached out to a load of TV stations, nobody got back to me. I found this one station that was 60 miles from my hometown, really small. So I said that I would be there for spring break, could I come and talk about an internship? This was a total lie, I was not going there. But I scoured the internet for the general manager’s email address, and he responded and said sure. He looked at my resume and took a chance on me as an intern. My first day was following a reporter and doing everything, shooting, writing and all of it. Two weeks later I get given a story and I ask who I was following, they say I am following Terry but it is my story. I am writing it, shooting it and I would be on the news. From then on I was a free reporter on TV, but by the way I was still working at a pet store back home to pay for the gas to drive the 60 miles.”

“So the internship ended up turning into a job. When I went to the general manager’s office and said thank you for the opportunity, but I can’t afford to do this. He said ‘Ah I’ve been meaning to talk to you Chris. You won’t be an intern anymore. We don’t have a position now, but we have created one for you, welcome to the team!’ It went from 0 to about $14 an hour back in 2005, certainly paid for my gas. I was reporting on the stories, and with local news it can be a bit of a stretch as to what is news. I remember being pitched the story about a cat that lives in a retirement home, and that’s the story! Also there was a story about a new stop sign. I was thinking this was great, but at 22 I didn’t want to be a news reporter or anchor. So I was submitting this to every TV station I could find, and after work I would take the camera and fake report on the bigger stories. I would set up the camera in a field and would say ‘Rocky Balboa hits cinemas this weekend and I am talking to Sylvester Stallone…’ And no I’m not talking to him, but we would shoot it like we were. I was applying for all these things and no one was taking me seriously. I submitted my stuff for this company in Vancouver and didn’t hear anything, but the name of the person hiring was on the application.”

“I called the TV station and asked for her by name. They put me through and I left a voicemail, she left me an email and said they would let me know. Her direct phoneline was in the signature so I would be calling her in a few days! Sure enough, I called her a few days later and said I would be in Vancouver next week, again a total lie! I flew out there and got the job and this is where things started happening for me.”

On improving my game:

“It was the transitions and becoming more comfortable on camera. I think that now in 2022 we are more comfortable on camera because we are taking selfies. You have the adjustment of ‘Oh that’s what I look and sound like?’ I think it takes 2 or 3 years to get used to that broadcasting version of yourself. That amped up and best version of yourself, that takes a bit of time to go this is me.”

“I think it’s just getting the reps in and just do it. Joe Rogan is on like episode 1,700, no one is looking back at episode 16 or episode 416. People will just put out 3 episodes, look at the numbers and think it’s a waste of time. It’s about the research, the recording, the editing… If all of that isn’t fun for you, then it might be time for something else. I think it’s important to figure out why you are getting into this. If it’s for a hobby or for money, it’s two completely different paths. I took my interviews and put them on YouTube as a digital library. Someone said to me ‘You’re making money from those right?’ I’m like what? Then someone showed me how to make money from YouTube ads and I was making some money from it. I was fortunate where this wasn’t my only source of income, but some videos were getting more views on YouTube than they were on TV.”

“It took a while for the shift to happen. With the network, it was so early that they didn’t really know about the YouTube videos. In 2018 I hit 100,000 subscribers and that was where it really hit some momentum. I felt like I was onto something with 20% of my time, so what was it like with 80% of my time.”

“I think it comes down to what value you are going to give. It’s obvious what The Rock or John Cena are giving you, but what are you giving them? When I got on the Fast 9 interviews, and I got 12 minutes instead of 4, they realized that a lot of people that watch my stuff are wrestling fans. John Cena has a lot of fans that are still wrestling fans, this is a no brainer.”

On what I have figured out [and what I don’t]:

“I think I am still figuring it out every day! I have personally figured out more about who I was more than I did when I was 18, but I am still figuring it out. My self awareness has grown a ton, but that’s something that comes with time. I am very goal driven, I say that vague goals get vague results, so I look at how I can get there and reverse engineer. There has been a lot of picking up my life and moving it, so while the surroundings change, I am still the same. I am in a relationship with the greatest person I have ever met, Rachel is amazing! This is the right time with the right person, I am figuring out a lot of adult things there. But in all of that, I am comfortable with making the commitment of this person is great. If I can keep showing up then we can keep showing up together.”