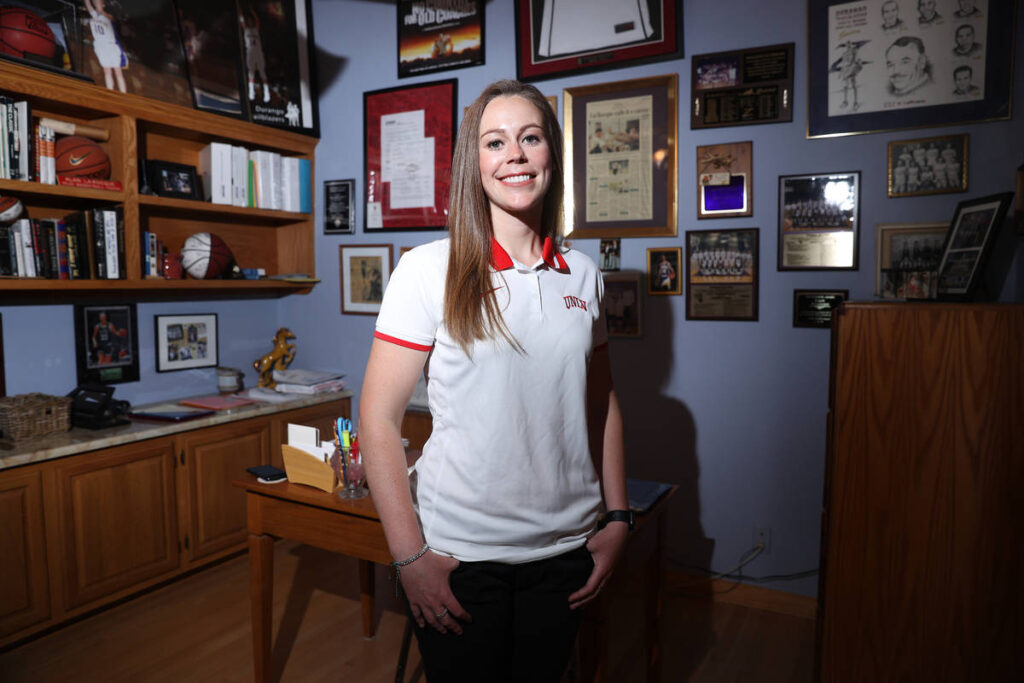 Linday La Rocque (@lindylarocque) is the head coach of the women’s basketball team at the University of Nevada , Las Vegas (UNLV). At her time of hiring, she was the second-youngest coach in Division I women’s basketball at age 30. She joins Chris Van Vliet at the Blue Wire Studios at the Wynn Las Vegas to talk about her style of coaching, what she looks for in an athlete, why a team is different from a family, he favorite quotes, what she learned playing basketball at Stanford University and making it to four NCAA Final Four tournaments under coach Tara VanDerveer and much more!

A lot of people watch sports and I think that they only think about the game day. There’s a lot of preparation that goes into what practice will look like.

“You know, I sleep and dream practice plans. I just put a lot of thought and detail into it, because you want to be really efficient. I want to be extremely prepared for young women and not waste their time. With practice planning, someone once said that it takes twice as long to make a practice plan to how long the practice is.”

So if practice is an hour, it takes two hours to plan?

“Well there is at least two hours of thought along with film and analysing what yesterday was and what we need for the next day.”

Is practice easier after a win or a loss?

“That’s a tough question. Sometimes after a loss there are some glaring things that you have to work on, so practice can be easier then, because that is as clear as day. Obviously when you are playing really well, you have to continue to motivate them, even when they think they are riding high.”

Was basketball the first sport that you played?

“Yes. I grew up in the gym and my father was a high school coach in town. He never forced it upon us, but we were there. My sister and I played soccer and some other sports growing up though.”

So what was it about basketball that really drew you to it?

“I don’t know. Obviously as a kid you are fascinated about a ball that bounces. You throw it and it comes back to you. I think growing up in the gym and being exposed to it so much at a young age, I found a lot of the intricacies, and you just find your love and your passion from it. I was blessed to see a lot of that at a young age.”

Was basketball the main sport you watched growing up?

“I think it was because of the exposure. I don’t remember watching a lot of sports on TV as a kid, but we had a sports family. Whatever was on and around, we were playing it. I think we made up some sports sometimes.”

Did you ever think that you would be able to do this professionally?

“I do remember a moment where there was a lightbulb clicking for sure. With the exposure, I was a ball girl right here at UNLV [University of Nevada, Las Vegas]. I think I was 10 or 12 at the time, so still pretty young. My sister and I had done that for a few years, but it was mainly so we could get out of school early in 2002. At the time Backy Hammon was playing for UNLV and for Colorado state, she was small and I was a little small kid. I remember watching her with the best seat in the house and being like well this is something that I can do. If she can do it, I can do it too if I work hard. That’s a clear memory of me knowing I could play basketball.”

So many people think that you need to be over 6 foot to play basketball, but that is not the case.

“There’s a lot of things. There’s the speed, the skill, the athleticism. I think watching Becky as a young girl, she didn’t have the size, but she could shoot that ball. I think I kind of adopted that, I didn’t have the height but I perfected the skill and worked hard at it.”

It’s easy to do the things that you are good at, but what was the skill that you had to work on?

“It was probably my defense. I think any coach that I have ever had will know that it was not my expertise. But the offensive side, I loved it. Everyone loves scoring, I practised the shooting so much and the ball handling. But for sure the hardest thing was being as excited for defensive playing as I was for offensive.”

Do you think there is more pressure on you now as a coach or when you were playing?

“Oh for sure as a coach. When you are playing, ultimately you have more control. As a coach, it is not in my hands, it’s about all the things I can do beforehand to put the team in a successful situation.”

How do you go from being a player to being a coach?

Everyone has their own unique path and perspective. I had such a great playing career, I didn’t play past college. When the light is coming and you can see it and hit the crossroads and you either go overseas or commit to coaching. To me, it was all about contempt and fulfilment. I was really fulfilled with the outcomes and was not going to regret not trying to play professionally. I was at peace with not playing on a team again, and I’m good with it.”

What was that moment for you?

“I wanted to step away from basketball. After graduating, I worked for a software company, but everyone knew I wanted to coach. I needed to take off my playing hat and have that closure and start a new chapter. I worked at the software company for about 8 months, but when football season was over, I had that moment of yeah I’m ready now. So I kind of had a gap year and tried to dive back into coaching.”

Does anything hurt now from your years of playing?

“Oh yeah. All of the joints and my hips, but luckily I never had any major injuries, so I am fortunate. But I do think I have some joint inflammation and wearing of the bones, but it’s alright.”

What do you think is the best advice you have been given about coaching?

“I think for coaching, there are so many layers to it. But if I am not having fun with it, how can I expect those around me to enjoy it? Yes you do set the tone for those things as a coach, but if you are not having fun, it is a big red flag.

Is it still fun after a big loss?

“It is and it is challenging. It is such a big challenge, and I love that. Basketball is a game of mistakes, it’s like who can be the most imperfectly perfect. No two games are the same, it’s a fun puzzle to try and put together.”

What do you look for in an athlete?

“Well obviously there is the basketball side of bigger, stronger faster. There’s the size and the athleticism as well. Our recruiting philosophy is looking at the full picture, if you don’t take your academics seriously, then there is a piece of you missing. How you study a math test shows me how you would study a scouting report. Also there’s the intangibles of body language, being a teammate, communication.”

You seem so calm and mellow. How do you calm down after a game?

“I think especially as a young coach, that has been one of the big challenges. I am lucky that I live 20 minutes from campus, it’s close but not so close that I can walk. In my commute I can prepare for the day on the way there and decompress on the way back. It’s a constant roller coaster ride everyday. But calming down, I rely on my support system, my husband is the opposite of me and is so calm all the time. I rely on my parents to keep me grounded and see the perspective of things.”

You’re probably not a 10/10 excited every day. How do you show up every day?

“It’s tough. There are different days where it is tough. We talk about the drive, some days I need the music to get pumped up. There are good days and bad days, and sometimes the compartmentalisation is good and bad. I just need to remind myself of who I am doing this for and why I am doing it. Doing that can get you pumped up enough to get you where you need to be.”

So in collegiate sports, you only get these girls for 4 years maximum. What’s that like?

“Well it may be different to the pros, it’s a time in their life when they are most able to find themselves. I think it is a blessing to be a part of. Yes it’s only 4 years, but it might be the most impactful 4 years of their life. If they only remember 4 years, it might be those 4. It’s all about having a good feeling and investing as much as you can, having a lifelong relationship and writing those recommendations and send them into the world.”

I end every conversation talking about gratitude. What are 3 things in your life that you are grateful for?

“My health and my family’s health, to be in this position and my husband.”