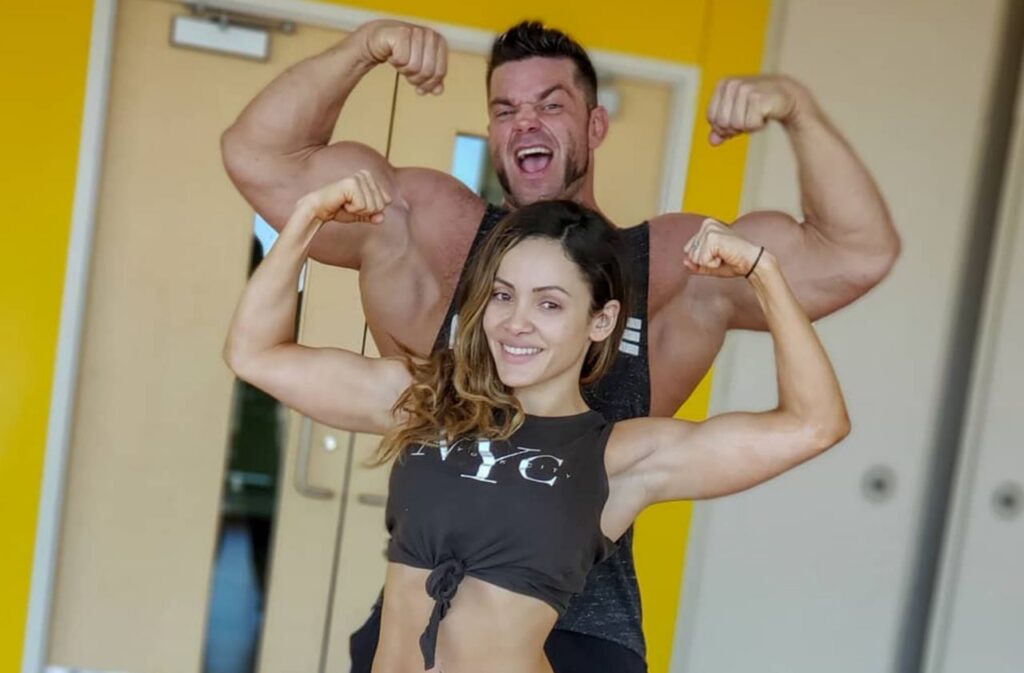 Melissa Santos is an actress, bodybuilder and ring announcer known for her time in IMPACT Wrestling and Lucha Underground. She joins Chris Van Vliet at the Blue Wire Studios at the Wynn Las Vegas to talk about why she started her OnlyFans account, what her husband Brian Cage thinks of it, her return to ring announcing for IMPACT Wrestling, her comments about Brian Cage and AEW, the preparation behind her first bodybuilding competition, moving from Los Angeles to Las Vegas and more!

“I remember when I first met him it was really shocking. Him and John Morrison were probably the most shocking, they were the most like ‘Wow, these guys are wrestlers, this is what a wrestler should look like.’ But yeah Brian John were surely the ones, and Brian just kept my attention. So yeah there is now a marriage, a baby and a move to Las Vegas later…”

On moving from California to Las Vegas:

“During COVID, California got restricted, like super restricted. And as parents, I couldn’t keep my daughter inside all day. No parks were open and it just went on for so long. It was really hard to find a day-care so I could go back to work and do stuff. So we were like ok, where can we go that is not as restrictive and has some freedom, so we found Vegas. I love Cali, and I don’t miss all of it just yet, I’m still new here in Vegas and there is so much to do here. Not yet, but I always go back.”

On starting an OnlyFans page:

“I wasn’t expecting to make the announcement. I had some new management that was like ‘Hey. We can do this and this for you, and we can organise you as this model. But we can also handle some stuff for you and put some content together for you for OnlyFans…’ They just kept pushing and they work for influencers and stuff. Also they helped me out with partnerships outside of that so yeah, this is good, let’s do this. I have a partnership that makes it better for the fans. I didn’t want to do it on my own, I needed to get that push. Brian was like ‘Babe do it! I want to see you out there being so hot!’ My husband just put me out there on a little pedestal.”

What does Brian think about the OnlyFans page:

“Yes he loves it, he approves some of the content. [Chris asks if he is taking the photos] In some cases, yes. He’s all like ‘Oh my Gosh, this is perfect this is great.’ And I feel like because he is a man and men know what they want to see on Only Fans, he’ll approve the content, so here we are.”

The popularity of her OnlyFans:

“It was like one day in and I had over 100 subscribers, this was at 6 in the morning, it hadn’t even been 24 hours yet. Every time I go there are more subscribers, it’s amazing. And they are sending me tips and messages thanking me, well you’re welcome. You will see a lot of me, but you will have to subscribe to see it. It’s a lot of me, but not in a way that you will be used to. It’s been nothing but positivity.”

On staying at home more:

“COVID really changed a lot of things for me. As a mother, someone has to stay home. I can’t leave my child at home with a bowl of good and some water and come back in a couple of days. I’m her mom and the parent that is always with her, so things changed. After becoming a mom, I had to re-route my efforts. And then when COVID hit, everyone had to re-route. But slowly, things are going back to, or becoming what they are but in a different way now.”

On getting into bodybuilding:

“Not exactly. I just always loved fitness, I just never thought that I would do the bodybuilding. The diet is so restrictive, I mean so restrictive. You understand the disciplines that come with it if you lift weights, so you can transition a little bit easier to bodybuilding. I needed the structure, and I wanted to learn something new, so it’s very different. I learned what works and doesn’t work for my body. Also, I learned about peak week, which is the week of the contest, and that was the worst. The water loading, the depletion, I was on zero carbs for 3 weeks too. I went from 137lbs to 112 lbs. Fats were every other day, so some days were just protein, it was horrible.”

On speaking out about AEW not using Brian Cage enough:

“I’m his wife. I’m not going to be like ‘Oh I wish things were different…’ No, f*cking use him more! I love my husband, he is my favorite wrestler. That’s how we started talking, I called him my favorite at Lucha Underground. There are not many people that look like him. I want to see him more like I used to. At Lucha Underground he was used all the time, at IMPACT he was the champion. I’m not saying ‘Hey. Let’s make him the champion!’ I just want to see my husband more. He comes out on the first episode of AEW and he f*cking ripping ladders apart. He is doing like the body guy stuff and you don’t really see that anymore. You see more like the cruiserweights. For me, yes I am biased because he is my husband, I want to see more of that. I did get heat because I am spicy, I’m very straightforward.”

On the heat that Brian got:

“I found an article, because there were a lot of articles written about him. I got really spicy when I shouldn’t have. But then he got all the heat for that, he didn’t say anything. I do feel bad for that because he loves wrestling, loves AEW, loves Tony Khan and loves being there. A lot of it came from the love of being involved. But because I am loud I got him in trouble, but it’s hard man.”

On returning in-ring but mainly as an announcer:

“Yes, but I am not against doing wrestling stuff. I have done stuff with Brian, but it has to be momentary. I can’t go up against a female wrestler, they are killing it right now and doing more than the men mostly. So I can’t compare myself to that, but I would love to work with someone like Havoc. I’m not against it, you can never say never.”

“My healthy body, my family and I was raised to believe that I can.”