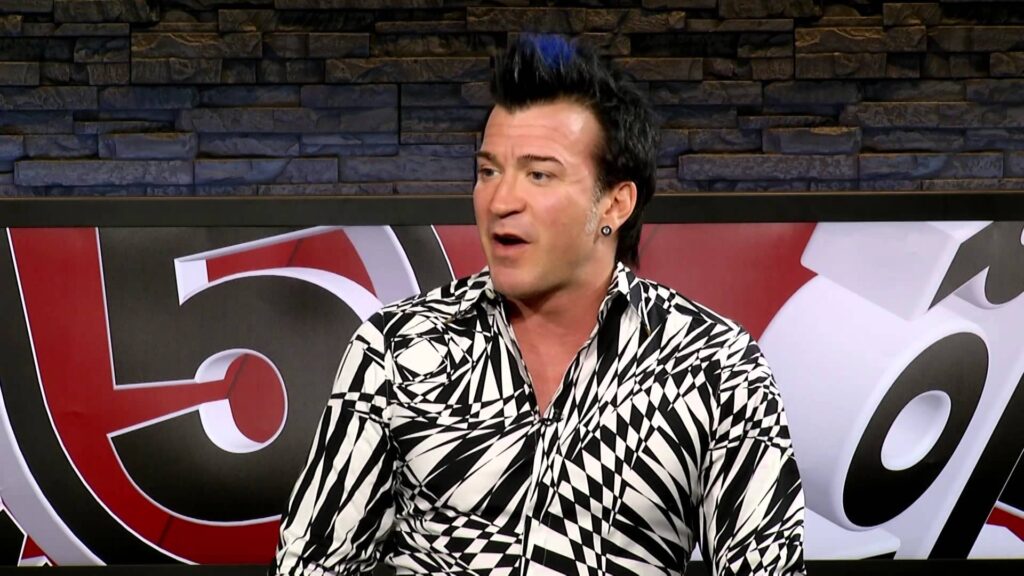 Robin Black is a mixed martial arts commentator and analyst, former MMA fighter and glam rocker. He sits down with Chris Van Vliet in Los Angeles to talk about how he went from front man in a Canadian glam rock band to MMA fighter to now MMA commentator and analyst working for Bellator, UFC, Karate Combat and many other companies. He discusses his one-minute breakdowns on social media, his friendship with Joe Rogan, making his fighting debut at 39-years old, the power of reverse engineering and more!

Where the love of martial arts started:

“I have always thought of myself as being built around martial arts. I was the weird little kid who was hyperactive, odd and saw things all differently. Martial arts gave me a little bit of structure, made me a little wiser, and that was always my purpose. But I sang in a rock band with tight pants and that was really fun. Martial arts was the route of it, but when I saw you last, I was a singer in a rock band who wanted to fight in a cage. My motivation was I want to learn about martial arts and obtain some kind of mastery. Now I talk about it, analyze it and it remains a route in my life. The job part, I was just trying to figure it out.”

“When I first started talking about fighting on television, people would post this picture of me with crazy hair and clothing and go ‘Look at this guy.’ I was thinking, are they trying to make fun of me? Because I think this looks cool. I did my hair, I did my makeup, because I thought it was cool. It was an odd reflection of society that people thought I would be embarrassed by that. I did that on purpose. So it was a part of a strange path, at one point I was a hairdresser while I played in a band. Then I am in a band and learning from good producers, then it’s art, then it’s fighting and then it’s tv. It’s all the path of being an artist.”

Turning his life around:

“I had a seizure while I was on tour with the band. When I got back, I went to the doctor and he told me I was doing way too many drugs, and that I had a hypoglycaemic seizure. I was doing speed and all sorts, but it was the days of vodka and red bull that caused the spike and the seizure, people can die from this. I went home, the doctor told me to clean up, and I started diving into martial arts deeper, and that became the hard shift in my life. That’s the origin story of me and how it happened.”

Not wanting to out-stay his welcome in the music world:

“I used to go into these bars, and I would look around and this guy would be there. He had the same hairstyle as me, but receding, and he had a gut. He would tell young girls ‘I used to play in a big rock band.’ I would look and be like, is that where my life is heading? I had the big turning point and dove into the martial arts. Within weeks I decided that I’m going to fight a guy in a cage. The only way you can do that is to go through the process of try and fail and try and then succeed.”

On making his MMA debut at 39:

“I got in, and that first fight I fought really hard, but I got beat up. I had a cut on my eyeball, I wore contact lenses the fight because I can’t see without them. That’s not really allowed, but I did it. I had a cut in the shape of my contact lens. I had paralysis in my cheek for like 5 months. From my eye to my tooth, it was numb from being hit repeatedly. I have resigned myself to thinking that this will be the memory of the fight and it’s permanent. I was hoping that it wasn’t going to affect my face, because the feeling had gone, but months later it came back. People say they admire anyone who gets into a cage, I admire anyone who gets in a second time. The first time in your mind, you will go in, land a jumping spin kick, the ring girl takes you home and you get the call from Dana White. The truth is that you get punched in the face and fail at the things you are good at under pressure. I got in there 8 more times after the agony, and that I am proud of.”

The power of reverse engineering:

“My parents really drove me hard. No one in my dad’s family graduated highschool, his father could only spell his name, which was Ed. Things had to be a certain way with my parents, my dad sacrificed being my friend to be my teacher. My mother instilled the idea that anyone can do anything very early on, I really believed that. At one point I wanted to be the first man to walk on Mars, I was born in 1969, so shortly after the moon landings. My dad broke it down and said ‘Ok, to go to Mars you have to work for NASA. You have glasses, so vision might be a problem, so you can be a scientist. To be a scientist, you go this way and apply at NASA.’ The idea of working for NASA became a real thing at 6 years old.”

“I don’t try to get involved in a lot of negativity, but if I do, I try to understand. [Someone said about me] ‘This guy is a failed musician, failed fighter and now a failed analyst.’ I don’t think you understand the thing. I think that travelling around the world and making records with genius producers and fighting in a cage, if you are seeing that as failure, you’re not going to play. I think we are incorrectly viewing the universe, don’t react to it, see the person. What is the anxiety? and what is the disconnect?”

“I’m trying to learn, like really learn. Being a martial artist since 7 or 9, so around 40 years, you start to understand how the humans move. Along the way, I hit plateaus where something didn’t make sense. So I spent a lot of time just reading or thinking by watching a lot of fighting. I try to see what is happening, physically, emotionally, chemically, psychologically. The further along I go, I have these periods of tension. When I go through this, I make these breakthroughs, generally it is the language of sport is very incorrect. The way we describe fighting, is we do it in the way we think a sports commentator would, and that’s not truthful. The guy does not have knockout power in his hands, no one does, it is just flesh and bones, you channel the power. We don’t notice it, but it isn’t truthful. If you start to learn MMA through that language, you learn the television interpretation of the thing. It’s fine if that’s what you want to do. But my goal is to understand it, so the language becomes a barrier, because it is limiting. Once I started to reject that, it started to become tension and a barrier. I love Rogan, but I muted his commentary when UFC was on. I would put it on mute and listen to classical music, and I did that for years! Soundbites and narratives begin to dominate our thinking, what we don’t grab is that Joe is brilliant because he is an individual. If you copy Joe, you are not an individual. So everyone commentates the same way, because they have a steady diet of the language. You have to reject the language and explore. It is really difficult, but you have to study it.”

“That my wife is my best friend, that she is carrying my future child, and that I get to do this every day.”