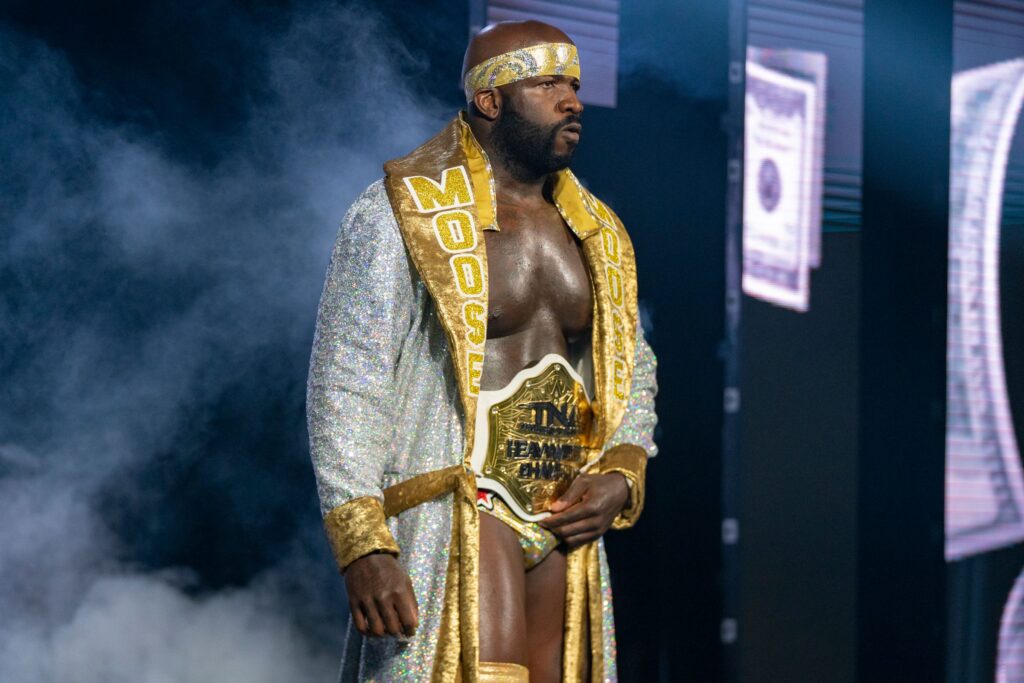 Quinn Ojinnaka better known to wrestling fans as Moose, is a former NFL player and a current professional wrestler signed to IMPACT Wrestling. He joins Chris Van Vliet to talk about getting drafted to the NFL, playing 7 seasons with the Atlanta Falcons, New England Patriots, St. Louis Rams and Indianapolis Colts, pursuing his dream to become a professional wrestler after his football career, how he was given the nickname “Moose” from teammate Michael Vick, starting from the bottom in the wrestling industry, making a name for himself in Ring of Honor, becoming one of the biggest names on the IMPACT Wrestling roster, bringing back the TNA World Heavyweight Championship and more!

On not being a die-hard football fan:

“I was never a big football guy. Even playing, I never really was a football guy. It’s just one thing that luckily I was good at. When I got drafted by the Falcons in 2006, I remember on the first day in the building I run into Warrick Dunn. Stupid me, I didn’t even know who Warrick Dunn was. I remember meeting him and going ‘Hey, my name is Quinn Ojinnaka, what’s yours?’ He looked at me like, ‘You serious?’ It’s like in wrestling and meeting Sting and not knowing who Sting is.”

On his time at Syracuse University:

“That was when I really started taking football seriously. I had a really good senior year, because I had all these agents calling me and telling me that there was a chance I could get drafted here. Not only just drafted, but drafted high too. That was the only time in my football career where I took football seriously. I started grinding, doing the extra work and doing more after practice.”

On the next goal once he got drafted:

“Once I got drafted, there wasn’t really any goal. I was making a lot of money, I was a kid who came from nothing to making half a million dollars a year for the first few years in the NFL. I was set, there was no goal, I wasn’t thinking about when I am going to be entering this wrestling journey. To me it was how much money can I make at this level. I was buying things that I could only dream of having as a kid, cars, clothes, jewellery, life was great. But there comes a time where you are making all this money, but you are not happy with what you are doing. After I got traded away from Atlanta, that was when it kind of struck. I have all these things, but I’m not really happy, because football is not what I set out to do. I’m living a lie because I am not happy, I am just happy with the money it’s giving me. My play started going down, I started playing bad because I was so stressed out. But because I wasn’t enjoying it, I didn’t really care.”

On taking a pay cut to pursue his dream:

“I got released in 2012 and had the opportunity to play for other teams. But I decided to start this journey to be a pro wrestler. You go from the last pay check at the Rams, $60,000, the first match I got paid for was $25. But it didn’t matter because I lived what I was doing. The first few shows I did for free, as long as I drove up, they would give me a spot on the card.”

On possibly never becoming a wrestler due to football commitments:

“Honestly I didn’t really think about that. When I was playing football, I didn’t really think about when am I going to start wrestling? I was enjoying the money I was making, I still did watch wrestling whenever it came on. So I had enough money where I had a routine, me and some of my friends would fly to wherever WrestleMania was and make a weekend out of it. I did that every year, WrestleMania lines up with the off-season in NFL.”

The origin of the name Moose:

“Michael Vick actually gave me the name I think. It stems all the way from my rookie year when I was in Atlanta. There was a guy that was called Moose a few years before I got there, I guess I looked like him so that was how I got the name. I hated it at first, I wanted to be called tank, because everyone called me that in high school. But the rule in the NFL is you don’t get to pick your nickname. So it just stuck with me.”

On using the name Moose in wrestling:

“When I was in training, we would do this Thursday night free show for the fans. If the trainer thought that you was good enough, he would book you on the free Thursday shows. We would have at least 30 people in this tiny building, 30 people made it feel like WrestleMania. When he told me I was being booked for a match, I was like what can I call myself? I sat there for hours thinking about it, and someone said ‘How about you go with Moose?’ Everyone called me it so it was easy. I also thought if I started going ‘Moose!’ in my entrance, people would start saying it too. I had a buddy who could do music, so I said I just wanted it to say Moose the whole time. That was where my entrance music came from and it got over.”

On what was next after Ring of Honor:

“I don’t know how I got on their radar. I remember signing my first deal with Ring of Honor, which was $125 a show for a 1 year deal. When my contract was up, they offered me a salary of $20 grand. I signed a second contract and when that was nearly up, I knew I was getting there in wrestling. Then I got an email from Canyon Cemen at WWE, he was like ‘I know you did a try-out a couple of years ago…’ I actually did the try-out before I went to wrestling school, I got it because my team mate was James Laurinaitis [son of Road Warrior Animal]. He got me the try-out after I was done with football. I hit my head on the ground after doing a headlock takeover, I got real loopy. When my Ring of Honor deal was up, they wondered if I was interested in doing another try-out. Why wouldn’t I? It was my dream to work for WWE.”

On a possible WWE opportunity and the move to TNA:

“I remember doing the try-out and they were like ‘Hey, we really like you, but all we can offer you is a shot on Tough Enough. ‘ For me, I was in the position where Moose was going to be a household name, I didn’t want to stop everything and start fresh. So I was set to sign back with Ring of Honor, and I got hit up by IMPACT. They told me they would pay me 4 or 5 times more what I was going to be offered for my 3rd contract. To me, I looked at Ring of Honor, no disrespect, as a big named indie. I saw TNA as an actual wrestling company, because of all the history they had. This was my chance to go and play with the big boys, so I joined TNA, which is now IMPACT wrestling.”

On bringing back the TNA World Heavyweight Championship:

“I wish I could take credit for that, but we do have a great writing team. Jimmy Jacobs, Tommy Dreamer, Scott D’Amore write pretty much the whole show. It was their idea and when they presented it I went with it. The idea was such a great one, it reminded me of when Ric Flair went back to WWE and he had the NWA title and telling people he is the real world champion. It gave me the same vibe of me being Ric Flair and I’m bringing this title back in. Even though I never won the title, I just saw it in an office and picked it up. I’m being a d*ckhead and saying I am the greatest champion of all time. I think that helped my character development. It was one of those things where I bring a title back that I have never wrestled for and won it. But when you talk to fans on social media, they think I am the real world champion, but I never won it. Some fans actually believe me and believe in me as Mr. IMPACT Wrestling. That whole storyline helped with my development and my momentum.”

On his IMPACT Wrestling Mount Rushmore:

“When I’m picking my Mount Rushmore, I’m not picking names who have made their name somewhere else. So with that being said Jeff Jarrett, who created the company with his own money, probably should be on the Mount Rushmore. But I’m not going to pick him because he made himself in another company. Obviously he should be number 1, because without him there wouldn’t be a TNA. So my 4 are AJ Styles, Gail Kim, Eric Young and Chris Sabin. If I could pick a 5th person, it would be Abyss.”

“My wife, my 11 year old son and myself. It sounds selfish but as a kid, this is what I wanted to do. Me waking up every day and live the life I dreamt about as a kid, it’s awesome!”