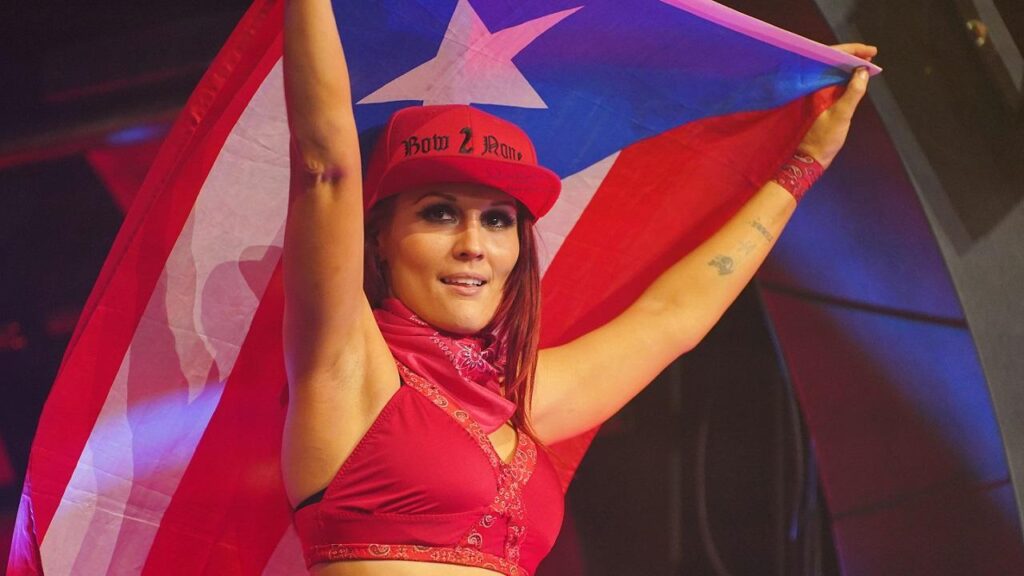 Ivelisse Vélez is a professional wrestler known for her time with WWE, AEW and Lucha Underground. She joins Insight with Chris Van Vliet from her home in Tampa to talk about her time in AEW and being released by the company, her issues with Thunder Rosa, why she feels she is misunderstood, the evolution of women’s wrestling and much more!

On not doing many interviews:

“I’ve kind of done it purposely that way. Even before I didn’t do a lot of interviews, becasue I am so invested in the performance aspect of it. For me these past months have been really difficult to process, emotionally an mentally in every way, shape and form. More importantly becasue of what happened a couple of months ago and everything around it. Just the culmination of a lot of things, even before being signed with AEW. I had a fire where I had lost everything that I had worked for. It was actually right before the Dynamite match. Then after that happened, it continued into the tag team tournament. It was non-stop how everything affected everything, including my household. Then there was the person inside in AEW, just everything all together was a big culmination. The the cherry on top was online and Twitter. That’s why I have stayed away from interviews, to maintain my mental stamina.”

“Yes, definitely. Becasue I am the type of person who has come from nothing, and I have so many components against me. It doesn’t even give me the time to explain myself. My whole life I have been in hustle mode, so I have never had a chance to fix the misunderstandings. Also I am a female, and there is a lot of progress in the world and in general when it comes to sexism. that is one of the issues that is very far behind. Being a female in a male dominated business, I feel there is so much left to go. Also being a minority, there’s a lot of things about who I am and my identity that people won’t understand. That is what helps me to not take it as personally. I just keep pushing to fight for all that I stand for.”

On the mistreatment of female veterans:

“Of course it is inevitable to say that there has been a lot of progression. The only thing is that some parts are still far behind. The treatment towards female veterans, who are such an important part towards propelling all those changes. The changes are giving more time and more opportunities and more chances to shine. The exposure is where the changes are happening. But there is only so much that will do if the other changes are so far behind. Everything like how you treat females, how you value the veterans and perceive the women in general. That is what’s missing. The important part is the structure to propel them and move them forward.”

On Mickie James being an NWA producer:

“Yes that’s one. That’s why I was excited in seeing a female veteran [producing]. That is awesome and that is a step in the right direction. Politics will try and fins their way in anywhere. But when it is a female veteran of that calibre, it’s still a bigger component than politics. I feel that will over ride that enough to keep that momentum moving forward.”

On whose fault the incident was:

“To me, the blame of who [is at fault] is irrelevant, it’s business. The way I see things is that communication is the solution to anything and everything. I feel like that was the most disappointing part. I know in my mind that it was a misunderstanding between a group of individuals. The only way to move forward from that is to talk. If you don’t talk then nothing get resolved. That was the most disappointing part. There was a lot of reasons why it didn’t happen, but hopefully it gets to happen eventually. To me, it’s a matter of resolving the misunderstandings.”

On issues with Thunder Rosa:

“It’s a culmination of a lot of things from her part. It all started in the past on Lucha Underground. It was the same thing that happened in the match [in AEW] that happened on Lucha Underground. I thought that was learned, because when we encountered again in the indies, in that match she didn’t do any of that. When it comes to anything personal outside, I’m the type to just let it go. Once you are in the ring, that needs to disappear. You focus and do what works for the match. But outside of the Lucha Underground match I had heard a lot of things. In my mind we weren’t working so I didn’t need to worry about it. But that match happened outside and it didn’t happen again, so maybe she did learn. But then AEW comes, and never in my wildest dreams did I think it would happen, and it did. I don’t know why it didn’t occur to me. Maybe becasue she was the champ it gave her more courage. But you are still wrestling a veteran and you are a professional, it doesn’t mean you can be unprofessional.”

“Of course, and you know it’s Twitter. And this is not even new. They took advantage of the vulnerable moment and all these years of gunning for me on twitter. But I ignore it, which can contribute to people’s perceptions of me. But I don’t have time for it, because I am always hustling. But it was kind of crazy how they turned me into the unprofessional. Anyone with a brain would have seen first of all, you don’t disrespect the veteran. Also, I was the signed talent and you are coming from the outside company! Thirdly, in the match, they [the audience] could see how it starts. It’s like with the Charlotte vs. Nia. I watched it neutrally and as a professional I can understand what happened more accurately. But it’s Twitter and a massive chunk was taking advantage.”

On leading up to that match and the match itself:

“The fire had damaged my gear. So when I got to AEW, I had to buy new gear with what little money I had left. The insurance screwed me over, it was a mess. I had to buy gear from out of nowhere. It was a non-stop bamboozling of going to hotels, driving back and forth and trying to find my way. That night was like [sighs] but then it’s ‘Tomorrow night you are wrestling so and so.’ I am like man, I don’t have the mental stamina to go with that. But whatever is in the tank, you gotta give the people what they want. When they announced it, everyone went crazy. So push it all aside and execute as much as you can. When the day came, she didn’t want to do anything. I’m like what? No this match will be awesome. But I’m also trying to knock it out of the park. Even at the start, with the slap, we went over that 1 million times, we knew. She forgets what comes after, I had no choice but to nudge her face, that’s when the shoot stuff happened. I’ve trained MMA, you can’t pull that on me. I just didn’t want to allow that negativity. I didn’t want to be pulled into that, she tried and tried though. Also I was already signed, why would I do that? Somehow I was made into the bad guy though. There is nothing that can be done about that, but the bigger issue is not understanding what kind of an asset I could be.”

On online abuse and ignoring it:

“Honestly I feel like the only way I can handle that, how I always handle it, is to not give them ammunition. No matter what I do or don’t do, they will do it regardless. I can only control me. I will be careful not to give them that ammunition, but at the same time they will not impact my goals and my purpose and who I am in general. I am going to keep fighting for it regardless.”

On what changes she wants to see in women’s wrestling:

“A big part is wanting to see those changes in women’s wrestling. When I saw Lita and Trish main event RAW, I was like wow I want to see more of this. I want to see them get the respect for the work that they put in, regardless of gender. That is a massive motivator for me. But wrestling is an escape from this personal world. But I have also tried to educate myself in psychology and managing traumatic experiences. I have tried as much as possible to use as many psychology techniques as possible. There’s a lot about me that no on knows as a person.”

“Life, health and support from others.”