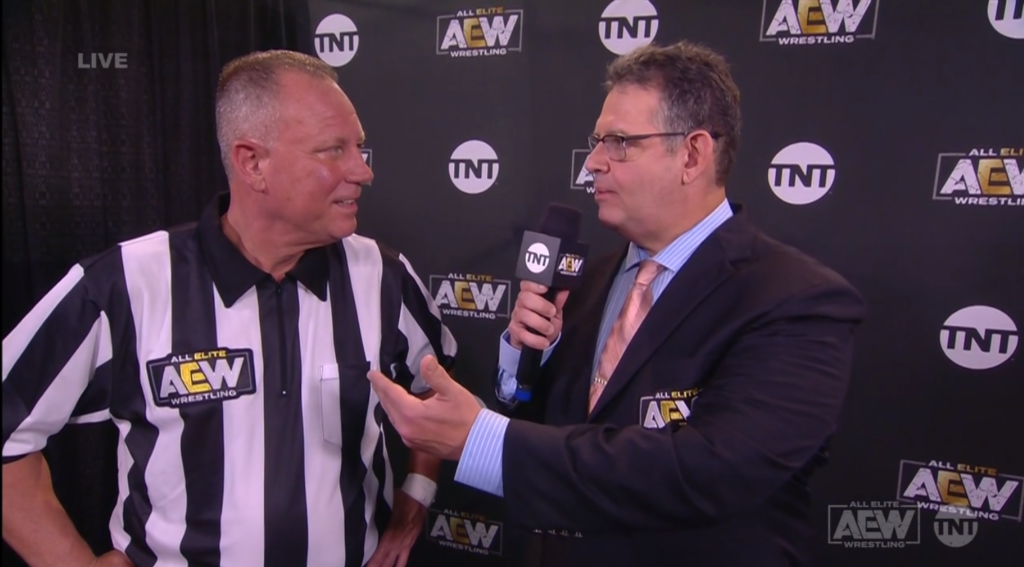 Mike Chioda on his WWE release, working for AEW, his favorite matches to ref, Vince McMaho‪n

Referee Mike Chioda joins Chris Van Vliet from his home in Tampa, Florida. He talks about being released from WWE after 35 years, working for AEW, the differences between refereeing in WWE and AEW, his favorite matches, what he learned from Vince McMahon, his podcast “Monday Mailbag” on AdFreeShows, the ring collapse spot with Big Show and Brock Lesnar, his advice for someone who wants to be a referee and much more!

On refereeing Chris’s favourite match: The Rock vs Hulk Hogan from Wrestlemania X8:

“There’s this picture on my Twitter account where I am watching Rock and Hogan, and we didn’t do anything in the ring, just the stare down. We had them on the entrance. Canada has been such an awesome crowd for wrestling, look at all the great talent that has come from there. Every guy from Canada knew how to work and how to tell a story. The Rock vs Hogan match wasn’t going to be a high flying manoeuvre match, it wasn’t going to be this amazing technical match. It was just icon vs icon, and it really tore the house down. They just had the people from the start to the finish, and they were wiped out after that match. All of the energy was just taken away after that. Chris Jericho (who was main eventing that show) knew it should have gone on last.”

Chris then recalls Hulk Hogan telling him a story off camera that the NWO turning on him after the match was not planned:

“I remember them coming down, and I remember them being back there. It was a question of whether they decided how that match went, and where they wanted to go for the next year with Hogan. So that was a call on Vince McMahon’s part I believe. I’m a believer that we should dictate the crowd, not the other way around. But on that night, we had no choice, it dictated where that match should have been on the card. I marked out when they had that stare down, it was a passing of the torch moment.”

On who called him from AEW and his last months in WWE:

“Cody Rhodes and Chris Jericho got in touch with me, which I really appreciate. I actually heard from Cody a couple of weeks ago, so I’m waiting to hear something back. I got a few more years left in me, I don’t want to be around forever though. A few years ago, Triple H came to me and said we are going in a different direction with the company and he didn’t want to see me in the ring when I am 65 years old. I agreed with him on that, I have accomplished everything I wanted to do in the business.
When I got released, I thought I was going to be transitioned to a training role at the Performance Center and train referees. But then I got the call on April 15th and I was shocked.”

On how he became a referee:

“At first I wanted to be a wrestler, but Gorilla Monsoon changed my mind. I worked for him, and he gave me the words of wisdom that long term career in wrestling is refereeing. You can have 10 good years as a wrestler, but if you keep your head straight and do the job right, you can be a referee for 20-30 years. He also taught me how to bump like a referee because they don’t bump like wrestlers do. So as a result I’ve had 33 years of refereeing, 31 of those on TV and 35 years with the company.”

On advice for anyone aspiring to be a referee:

“The biggest things are to be on time, don’t miss your flights and don’t party too much. You have to have a strong household at home so that the family is taken care of. You have to be prepared to miss holidays, because they are no days off. Step one is to go to the Performance Center, because that is where you will learn the quickest. You could spend 10 years on the independent scene, but it won’t be the same as what WWE wants. I am actually think about starting up my own classes, but how many people really want to be a referee? If you are a referee for WWE, you don’t get any royalties. The average referee makes about $125,000 but there will be around $30,000 in expenses. There’s fuel and travel costs for example. Then after that and paying taxes, the take home is about $60,000.”

Chris then asks about Mike being in a videogame:

“Yeah I was, but then I was taken out. I talked to John Laurinaitis about being in the game, then shortly afterwards I was out. I even said to John I would split the royalties with all the referees that have been here for a long time. But I was still taken out of the game. Instead, they took some guy from the office, paid him $2,000, and used him in the videogame instead. That was where it really hurt.”

On The Big Show vs Brock Lesnar ring break spot:

“That was very cool. The backstage producers wanted me to really sell the ring collapse. The wrestlers are selling it by being unconscious, I’m the one sitting up like holy sh*t what happened? The guys in my ear loved it. The pop wasn’t as big as Rock and Hogan but it was there. To get the ring to collapse, they put air bags underneath. When it’s time for the spot, they just release the pressure. We (Brock, Big Show and myself) didn’t rehearse the collapse beforehand, but they did test it with an empty ring. It was great to be a part of such an iconic moment in professional wrestling.”

“Brock almost hit that, and he was far out! That was supposed to be the finish of the match, but we went in a different direction. But that happens. Brock is such a big dude, but he is so athletic. I knew he could get it, but it was just too far out. When it happened, I just cringed. Thank god he was such a big dude, because anyone smaller would have broken something. When he landed on his head, I just hoped it wasn’t another Droz moment. It’s not a pretty sight, I just made sure that Brock was OK at the time. His eyed were glazed, he was not alright. I remember when we got Brock to the back, we rushed him right away to the hospital.”

On the Mick Foley vs Randy Orton Hardcore match from Backlash 2004:

“Randy did not like those matches, because he was not that type of wrestler. By the end of the match, he had about 50 thumbtacks in his back. I remember telling him “Just think about the payday.” It was a phenomenal match, but it was just a normal day for Cactus Jack though. For Randy, he was afraid of getting 10 scars, gashes etc, but he came out of it OK. There were thumbtacks everywhere. I remember wiping the mat before I counted, but I still have tacks in my hand. I remember thinking if this hurts, how does Randy feel right now? As a referee, I can’t complain at a few tacks in my hand if they are going through all this.”

“My mother, my wife, my health and 35 years of working for WWE.”